Assistant Albert Lea City Manager Jerry Gabrielatos announced Monday at the end of the Albert Lea City Council work session that he has accepted a position as city manager in West Linn, Oregon. 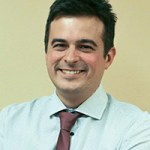 According to the city of West Linn’s website, the council had a special meeting Monday afternoon to vote on Gabrielatos’ employment contract for the position. Gabrielatos is slated to begin work there Sept. 14.

Albert Lea Mayor Vern Rasmussen Jr. said Mark Sievert, a retired city manager who served time in Fergus Falls and Lake City, has agreed to step in as acting city manager for the city until a new manager is hired.

Gabrielatos said Sievert worked well and was well liked among the council and staff during that time.

The council will likely vote on his appointment as interim manager at the next council meeting.

• Approved allocating $76,600 of its federal CARES Act funds to go toward the Freeborn County small business COVID-19 relief grant fund. Of that number, $6,600 will go to the Albert Lea Economic Development Agency for administration costs tied to the program.

City Finance Director Kristi Brutlag said the city’s additional funds will help fill the gap to meet the needs of the businesses that applied and qualified for assistance.

More than 130 businesses applied for funding.

• Voted to continue the city’s emergency order in light of the COVID-19 pandemic.

The order has been in place since March.

• Approved tax abatement for a new single family home being built in the Summerdale Townhomes Fourth Subdivision. The property will be eligible to receive 100% tax abatement of the city’s share of the increased real estate taxes resulting from the newly constructed housing unit for a period of five years.

• Awarded a one-year contract for biosolids removal from the storage tanks at the wastewater treatment plant. The sludge will be applied on approved land near the plant.

• Approved moving forward with the Minnesota Department of Transportation for continued evaluation of the railroad crossing on Wedgewood Road, northeast of Graceland Cemetery.

The state recently completed a rail safety study and identified the crossing to have risk because of the skew of the tracks and visibility, according to background information provided by the city.

The state will move forward with ranking the project, and if it ranked high enough, the project would be funded in 2023 or 2024.