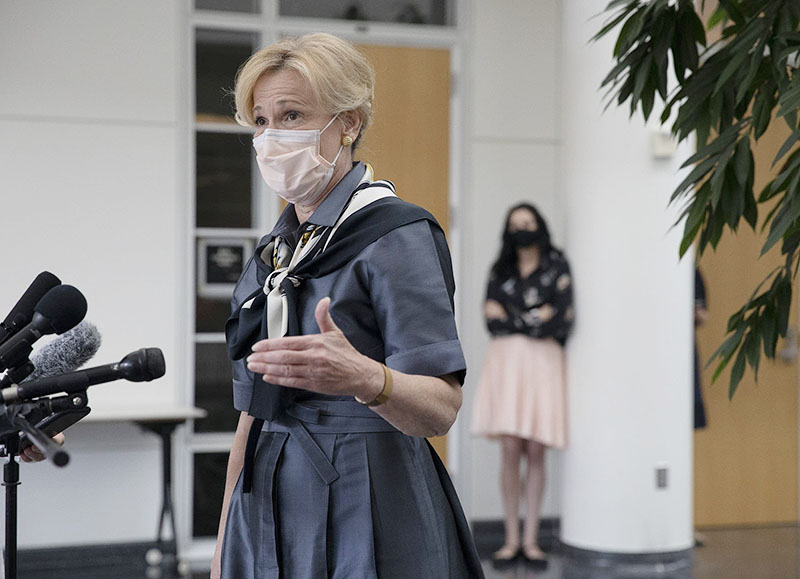 Minnesota’s rising positivity rate in several counties has drawn the attention of a key White House adviser on COVID-19, who made multiple stops in the state this weekend to get an up-close look at what’s being done to control the spread.

Dr. Deborah Birx held a private session Sunday with state officials and infectious disease experts at the Minnesota Department of Health’s headquarters in St. Paul. It came after a stop in Duluth, where she met with tribal leaders about how the disease is affecting Native Americans.

Birx said the multi-stop trip allowed her to pop in on restaurants and service stations along the way. In remarks to reporters, she stressed the importance of wearing masks, avoiding large crowds and remaining vigilant.

“There is a real attention to these mitigation efforts in the urban areas but there really does need to be improvement out in the rural areas,” Birx said.

Minnesota has logged more than 75,000 confirmed COVID-19 cases and more than 1,800 deaths. Cases of new infections remain stubbornly high — 934 new cases were reported Sunday after more than 1,000 on Saturday — but some of that has stemmed recently from increased testing and delays in reporting of prior results.

Birx said there’s a “worrisome trend” here because Minnesota now has nine counties where the rate of positive cases detected in tests now tops 10 percent, up from just a couple not long ago. Cases statewide rose 16 percent over the last week.

She said people might be fatigued by all the steps to fight coronavirus, but now isn’t the time to let up.

“Whether it’s a wedding, whether it’s a funeral, whether it’s a birthday party, whether it’s just a Sunday afternoon dinner where we brought together our family from across the city and we’re sitting in the backyard, if you don’t have a mask on and someone is within six feet, virus spread can and will occur,” she said.

Birx declined to address whether the White House and President Trump are sending mixed messages about compliance, specifically with the large crowd assembled on the lawn for the president’s Republican National Convention speech last week. People sat in close quarters for hours and many weren’t wearing masks.

Birx says people should heed advice about wearing masks, taking extra care around the most vulnerable and limiting crowds, including holiday barbecues.

Birx said once a vaccine is proven safe and effective she expects people to seek it out. But the goal now is to prevent community spread.

Among those who met with Birx were Health Commissioner Jan Malcolm and her key advisers and infectious disease expert Michael Osterholm. Birx met separately with Gov. Tim Walz.

“Governor Walz and Dr. Birx had a productive conversation focused on the progress Minnesota has made in our fight against COVID-19 as well as the significant challenges that remain,” Tschann’s statement said. “They agreed that while Minnesotans have by and large worked hard to slow the spread of COVID-19, there is still work to be done.”

Minnesota is the 23rd state Birx has visited in recent months. She is set to travel next to Wisconsin, Illinois and Michigan, her staff said.