Carmen was born on March 5, 1927 in Amsterdam, NY to Paul & Caroline Ferullo. 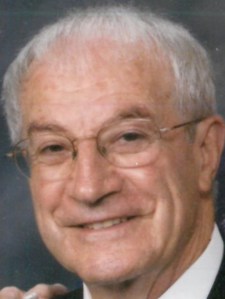 He went to public grade school and it was at this young age that his talent and love for baseball was discovered in little league. He graduated from St. Mary’s, a private catholic school where he played baseball and basketball. After graduating in 1945, he joined the U.S. Navy, where he served on the destroyer in the Pacific in World War II. He attended Siena college and then signed a baseball contract with the St. Louis Browns, where he played 6 years in the pros. He then played an additional 6 years in a fast semi pro (southern Minny), where he met the love of his life Ardis Trytten. They were married in Albert Lea, MN in 1954 and were proud to be celebrating their 66th wedding anniversary this coming October. Carmen came to Lubbock with IDS, a financial planning company as a divisional manager. He later became self employed as a financial planner. He loved the time he spent with Texas Tech baseball developing pitchers in the years 1989-1990 and he loved just “talking baseball”. On any day when baseball season started you would find Carmen at a baseball field offering to teach the pitchers fundamentals. He was also coach for his son and grandson’s little league teams. He was very much a family man. He was preceded in death by his parents Paul and Caroline Ferullo, sister, Angela Bertoldi, brother-in-laws Gordon, Meredith, Lamar Trytten and Dean Peterson and sister in law Ann Trytten. And father and mother in law George and Ingeborg Trytten. He is survived by his beloved wife Ardis, son Dan, daughter Julie Brown and husband Brent and his grandchildren, Kelsey Otts and her husband, Dylan, Blake Judah, Addy and Van Ferullo and his one great grandchild Sloane Elizabeth Otts, his sister-in-law Gloria Peterson among many nieces and nephews. He will be greatly missed by all the lives he touched in his own unique way. We are sure there is a heavenly baseball club awaiting his arrival to pitch for their club and right about now he is most likely headed to the mound to finish the 9th inning. The family would like to extend a special thank you to Area Community Hospice and to his nurse Lorin Duff. In lieu of flowers memorials are suggested to Meals on Wheels or to one’s favorite charity. Private family services were held at 1 pm, Wednesday, August 19, 2020 at Resthaven’s Abbey Chapel with Dr. Tom McGovern officiating. Online condolences may be offered on our website at www.resthavenfuneralhome.com