Dr. Theodore ‘Ted’ Myers passed away in his home surrounded by family on Wednesday, August 12, 2020. He was 86 years old. 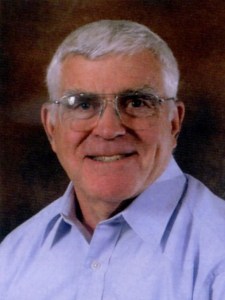 “To be doing good deeds is man’s most glorious task”. Sophocles

Ted was a loving husband, father, and grandfather. He was a quiet contemplative man who considered his words before speaking — a man of few words but many significant deeds. He also had a wry sense of humor, but you knew when he was joking by the twinkle in his eye. He devoted his life to the community as a family medicine doctor at the Albert Lea Clinic. He served as President to facilitate the transition to Mayo Health System. He also spent countless volunteer hours transporting medical equipment to under-served areas such as Guatemala, Haiti, and Bolivia. His kindness and compassion served him well in his profession. One of his greatest sources of pride was when a baby he delivered grew up and asked him to deliver their babies. Throughout his career he delivered over a thousand babies, each documented as an entry in one of his thirty years of date books. Ted’s best moment as a doctor was delivering his first grandchild.

Grandpa Ted was always available for phone calls from his children or grandchildren to diagnose everything from a hangnail to a broken collar bone, at the ready with his ear scope and a hug. He taught his grandchildren the love of competition with games of mental and physical skill including gin rummy, hearts, Tripoley, and soccer, baseball, and sailing. Ted was great at cards. He always tracked and remembered what had been played, so he knew how the rest of the game would play out and act accordingly. That is why when this latest challenge appeared, as well as the other struggles and setbacks in his life, he took them in stride, playing them out as best he could, having carefully watched and prepared for what to expect.

Theodore Poehler Myers was born on July 28, 1934 at the Myers hospital in Sheldon, Iowa to Dr. Kermit Whitney and Bertha Alice “Polly” Myers. He came from a long line of doctors who built the Myers Hospital in Sheldon. Much was expected of Dr. Kermit’s children. Ted excelled in school and had an infamous mischievous streak that got him into occasional trouble. Polly taught voice and piano lessons in their home which fostered his lifelong love of music.

Ted and his siblings spent their summers racing sail boats on Lake Okoboji and in Midwest regattas. A favorite memory is Ted fastening a flashlight to the mast for a midnight moonlit sail. Ted graduated valedictorian from Sheldon High School in Iowa in 1952 and attended the University of Iowa for his bachelor and medical degrees. He was a collegiate fencer, twice competing in the NCAA fencing tournament.

Ted met Judy Washer when she spent time at their home with his sister Isabel who was her best friend. Eventually his kid sister’s best friend became his girlfriend, to everyone’s delight. Ted and Judy were married on April 22, 1957 in Sheldon with much of the town in attendance. They returned to Iowa City to finish college and medical school and welcomed their first child a year later.

In his final year of medical school, Ted joined the US Army Medical Corps. He was stationed at the Presidio in San Francisco and at Fort Knox, KY. He served a tour in Vietnam from 1961-1962, as one of only three U.S. doctors in the country. While there, in addition to his medical duties, he saw the needs of the local people and helped where he could. While on leave, he volunteered at a nearby civilian hospital and brought them (via a “borrowed” C-123!) a giant sterilizer and medical supplies. At his last post, he led his corpsmen in setting up and furnishing a new orphanage.

After his time in the service, Ted and Judy again returned to Iowa City, four children in tow, to complete Ted’s training. While living there, their fifth child was born. In July 1964, Ted took a position with the Albert Lea Clinic. As Ted’s practice grew, so did his family, with their youngest born in Albert Lea. Between nurturing his career and his family, Ted was a busy man. He often found his worlds colliding when his active children ended up as his patients.

Dr. Myers’ career spanned from 1964 to 2004. While building his practice in Family Medicine, he was also involved in starting free immunization clinics after recognizing a need in the community. In 1975, Dr. Myers became the Medical Director of the Fountain Lake Treatment Centers. He became president of the Albert Lea Regional Medical Group, eventually merging with Mayo Health System. He served on the Naeve Health Care Foundation board from 1999 to 2013, the last 10 years as president.

In retirement, Ted had the time to pursue some of his favorite past times such as fishing, puzzles, and his Japanese garden. Many summers were spent together at the family cabin. Ted and Judy also spent time in the Twin Cities with season tickets to the Minnesota Orchestra, attending grandchildren’s events, and attending college and pro sports games. He had a special place in his heart for his Hawkeyes and the Minnesota Lynx.

Ted, Grampa, Papa, Teo – you are so loved and sorely missed. Enjoy your walks with Annie.

Ted would be honored by donations to any organization working on fostering social justice and reducing inequities, especially in health care, as these are issues close to his heart. A drive-through visitation will happen on Wednesday August 19, 2020 from 4-7 pm at Bonnerup Funeral Service-Albert Lea.