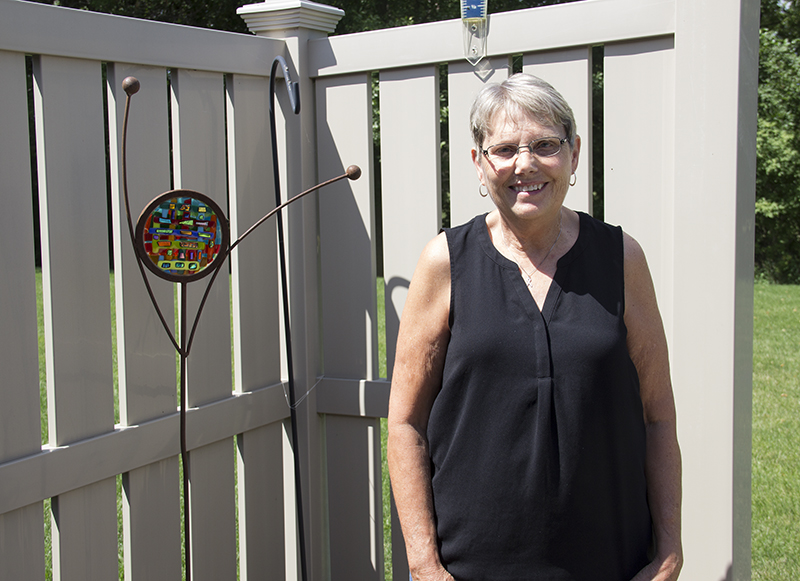 An Albert Lea woman is sharing her experiences of not just one, but three, types of cancer as one of the honored cancer survivors this year for the Freeborn County Relay for Life.

Sally Skrlin credits a positive attitude and the support of friends in helping her get through the difficult moments along her cancer journey.

“I get excited when anybody will listen to my story,” Skrlin said. “People have no idea what I went through.”

Skrlin said her first bout with cancer came in 2005 with what started as a small lump on her neck. She credited Dr. Phillip Lee at Mayo Clinic Health System in Albert Lea at the time with helping catch the cancer early.

The initial biopsy came back negative, but then a few months later, Lee asked that another CT scan be conducted and the lump removed. After some additional testing in Rochester, she was diagnosed in November of that year with Stage 1 Hodgkin’s lymphoma, or cancer of the lymph nodes.

She said it was difficult telling her parents and her daughters the diagnosis.

She underwent six months of chemotherapy, starting out with four chemo drugs. She said she lost her hair and was famous for her hair caps made by her mother.

In February 2006, she had a bad reaction to one of the drugs and ended up with blood clots in her kidneys and lungs and was in the hospital for eight days before being reduced to three medications.

After her treatment concluded in May 2006 she went back for checkups every three months for two years and then every six months for three more years.

Skrlin said she thought she was cancer-free until in June 2014, during a routine mammogram, doctors found a lump that was later diagnosed as ductal carcinoma in situ (DCIS).

When she heard the diagnosis, she said she knew she had to keep a positive attitude.

“I just feel like personally I had to hit it head-on,” she said.

She had a lumpectomy and went through 20 radiation treatments at the oncology center at Mayo Clinic Health System in Albert Lea.

Radiation, she said, was easier for her than the chemotherapy, aside from the fatigue she felt when the radiation treatments were complete.

Round three with cancer came in April 2019, when she had what she describes as a “massive bladder bleed” and was ultimately diagnosed with high-grade bladder cancer.

Doctors initially thought it was low-grade bladder cancer, but later found out it was worse.

She underwent two surgeries to remove the tumor and also went through immunotherapy called Bacillus Calmette-Guerin treatment, which is meant to prompt the immune system into attacking cancer cells.

She said she fought to have that at the Albert Lea hospital and was the first one to be able to do so. Those treatments lasted once a week for six weeks.

Now, she returns to Rochester every three months to have her bladder checked with a scope — she said there’s a 50% chance of it reoccurring.

Through all of her experiences, Skrlin said she urges people to not ignore their cancer symptoms.

“If you question it, see someone about it,” she said.

There was also no history of cancer within her family, and doctors have told her that her cancers are not related.

Throughout the years, Skrlin has been on the committee for the Lloyd and Ardis Peterson Cancer Symposium through the Albert Lea clinic, and her mother got involved with raising money for the Relay for Life.

“I just think that people sharing their stories makes other people aware,” she said. “I’m a survivor — three times and three different situations.”

“Don’t be afraid to call and ask how they’re doing,” she said.

Skrlin is a retired medical technologist in the lab at Mayo Clinic Health System in Albert Lea and retired in March 2016. Her husband, Dave, is a retired custodian with the Albert Lea school district.

They have two daughters and have two grandchildren.

More info: Because of COVID-19, this year’s event will be limited to a drive-thru luminaria event