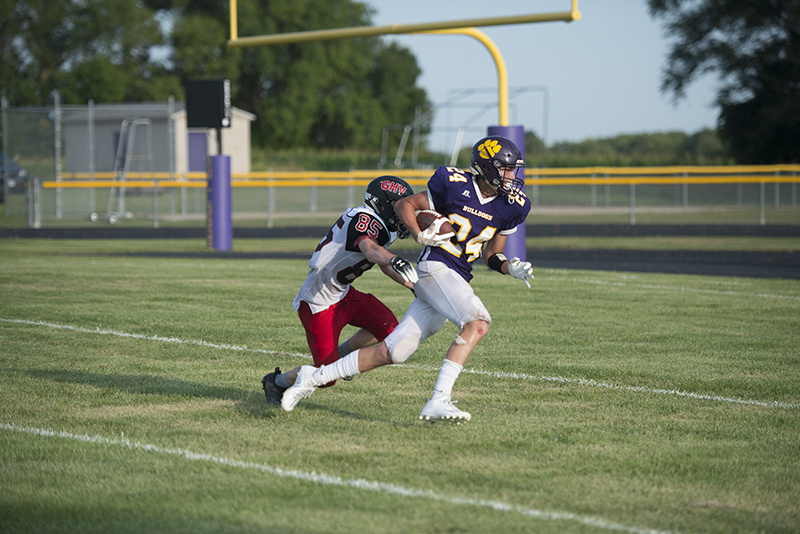 LAKE MILLS — The Lake Mills football team hosted Garner-Hayfield-Ventura Friday night in a preseason scrimmage to get some reps in before the start of the regular season.

The two teams took turns alternating between offense and defense for 10 plays each. Two drives for each team started at midfield and the third drive was lined up at the goal line.

The Bulldogs offense was highlighted by three scoring plays. Two of which came on deep passes from senior Jack Ramaker to junior Kadin Abele. 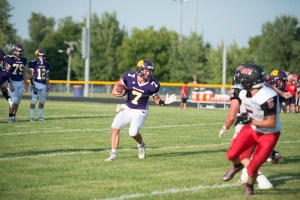 Junior Bennett Berger rushes to the outside for a short gain Friday night at home. Tyler Julson/Albert Lea Tribune

The third scoring play came on a short goal-line run to the corner of the endzone by junior A.J. Ramaker.

Defensively, the Bulldogs gave up a deep pass touchdown on the second drive as well as a short rushing touchdown from the goal line.

Head coach Bill Byrnes said his goal for the team is to win the District 3 Class A title this season.

The Bulldogs start the regular season Friday night at home against the Indians of Forest City.