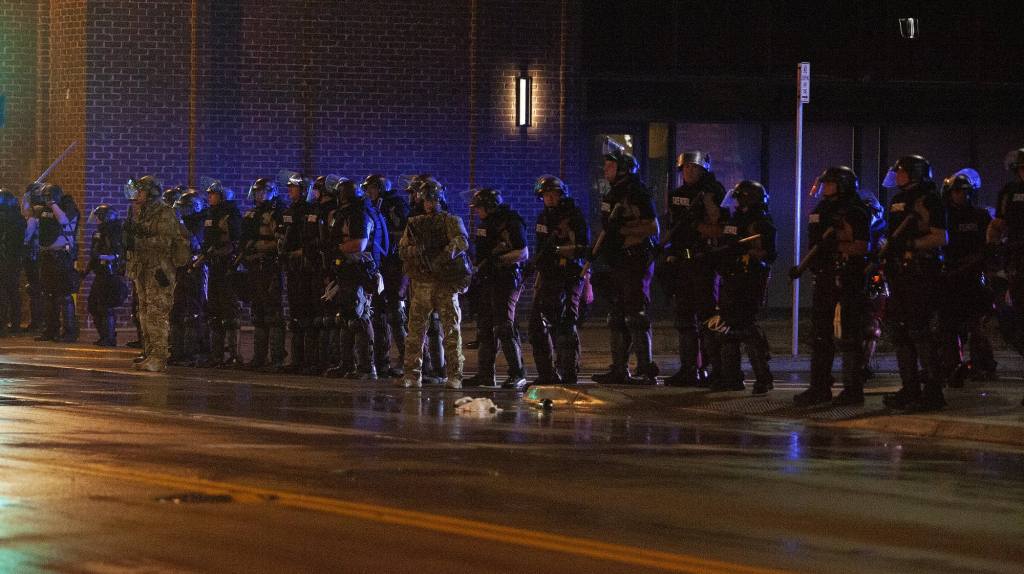 Minneapolis Mayor Jacob Frey issued a curfew Wednesday night to try to curb potential for violence downtown following rumors that a man who died by suicide had been shot by officers. Loose groups of people smashed windows, grabbed merchandise from stores on and around Nicollet Mall.

Frey requested the National Guard, and shortly after that, Gov. Tim Walz said the Guard would respond to a declared peacetime emergency.

Walz also said in a late night press conference that he was sending 150 members of the State Patrol to help Minneapolis police and the Hennepin County Sheriff’s Office.

Through the evening, law enforcement set off flash bangs, blocked streets as crowds, including some on bikes and scooters roamed the streets. State vehicles blocked highway entrances into Minneapolis.

Earlier in the day, police tried to quash rumors that a man who died by suicide downtown had been shot by officers.

The man — whom authorities have not identified publicly — had been wanted in connection with a fatal shooting in a Target Field parking ramp earlier Wednesday.

He shot and killed himself just after 6 p.m. near Eighth Street and Nicollet Avenue as officers moved in to arrest him.

“Officers immediately approached, slid the gun away from him, removed his backpack, and immediately began chest compressions. He was pronounced deceased at the scene,” Elder said.

Arradondo said not only police, but community members tried to show the video and explain to people what had happened. The city of Minneapolis and the Police Department also took the extraordinary step of not only releasing the graphic video to media, but also tweeting a link to it.

Walz said unlawful behavior will not be tolerated.

“We’re going to have to continue to as a state and as a nation be willing to separate clearly the need for positive reforms and the grievances and systemic racism that is driving many people to a sense of desperation — and clearly separate those from unlawful, reckless and dangerous behavior,” the governor said.

Though there appeared to be no organized protest, people shouted their frustration with police. The city is still reeling from the death of George Floyd, a Black man who was pinned to the ground three months ago by the knee of a white police officer. His killing unleashed largely peaceful protests but also several days of looting, fires and rioting in Minneapolis, as well as a national reckoning on race and police reform.

Earlier in the day, Frey and Arradondo announced changes in police policy aimed at reducing use of force. The changes included requiring officers explain whenever they unholster weapons in the presence of a subject, and not firing at vehicles unless public safety demands it.