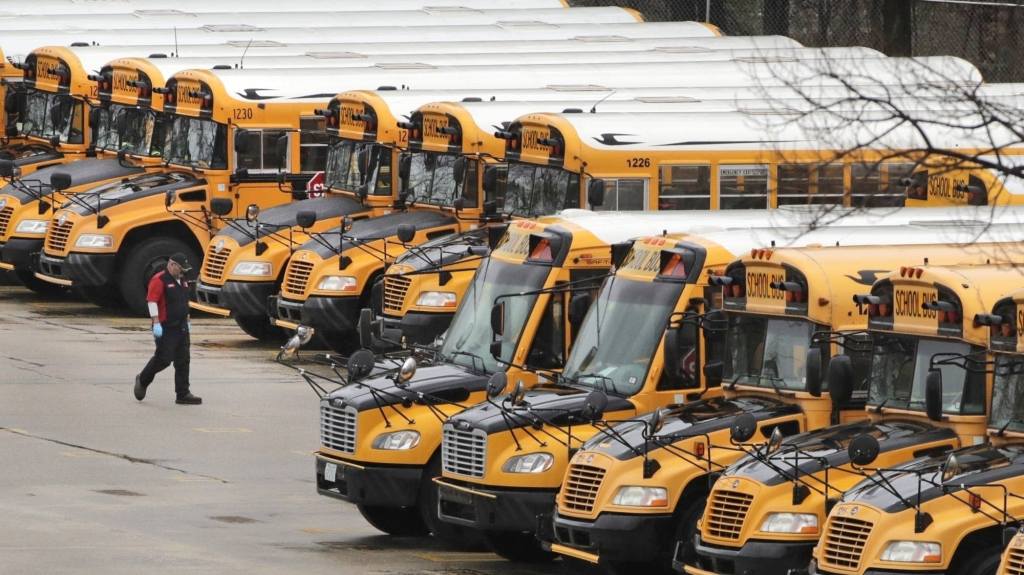 The evolving COVID-19 pandemic in Minnesota continues to change school reopening recommendations around the state.

In the latest batch of calculations released Thursday, 11 counties saw their recommendations change for the worse if school started today, away from in-person learning for all students, while six counties saw improvements.

Officials say the school reopening recommendations from per-capita case figures are intended to be a starting point for decision-making, with the final calls made by school districts in consultation with the Department of Health.

There’s no geographic pattern to where counties are seeing their recommendations go up or down.

For example, among the nine counties in southwest corner of Minnesota, three saw their recommendation change for the worse in this week’s update, four saw improvements, and two stayed the same.

Nine counties have case levels high enough to suggest hybrid learning for all students in the Health Department’s rubric — but they include Hennepin, Ramsey, Dakota and Scott counties, and altogether cover 45 percent of the state’s population.

No counties currently have so many cases that they’d be recommended to have all students remote, if school started today.

Where do local counties stand?

From July 26 through Aug. 8, area counties had the following case rates:

The state recommends the following guidelines:

• 0-9 cases: in-person learning for all students

• 20-29 cases: hybrid learning for all students

• 50+: distance learning for all students

Minnesota’s lived in a recent COVID-19 cycle of mostly moderate daily death counts and a stubbornly persistent level of hospitalizations. That trend continued in Thursday’s data.

Current hospitalizations (309) and those needing intensive care (148) fell from Wednesday. Hospitalizations remain far below a late-May peak, but the count has flattened at a relatively high level — more than 300 daily cases on average during August.

Of the 67,308 confirmed cases since the pandemic began, about 90 percent of those diagnosed have recovered to the point they no longer need to be isolated.

Thursday’s report brings the death toll to 1,745 Minnesotans. Among those who’ve died, about 74 percent had been living in long-term care or assisted living facilities; nearly all had underlying health problems.

‘Do the right thing’

The newest numbers come a day after state public health leaders sharpened their message of personal responsibility as they continue to hear reports of Minnesotans doing the wrong things in the pandemic.

As they implore people to do the right thing, they are increasingly expressing frustration over fresh reports of people doing the wrong thing.

Officials have heard anecdotal but “troubling reports” of parents who want their kids back in K-12 school buildings this fall so badly that they are choosing not to get their children tested for COVID-19, despite symptoms, for fear it will hurt their local school’s chances of teaching in-person, Dr. Ruth Lynfield, the state’s epidemiologist, said Wednesday.

“These behaviors are exactly the wrong thing to do if we want to get the COVID pandemic in Minnesota under control to the point where more in-person learning is possible,” she told reporters on a day the Health Department reported 17 more deaths — Minnesota’s highest daily count in two months.

As she and her colleagues have done for months, Lynfield implored Minnesotans to wear masks in public indoor spaces, socially distance and stay away from large gatherings to stem the disease’s spread, even as she acknowledged the overall fatigue facing Minnesotans who want to return to life before the disease.

“The way out of this mess is clear,” Lynfield said. “Health care professionals and health care providers have their roles to play — and so does every single Minnesotan. We need people to do the right thing.”

Regionally, the Twin Cities and its suburbs have been driving the counts of newly reported cases, although there’s an upswing now in southern Minnesota.

Northern Minnesota cases have been mostly on the rise since early July, although new counts have retreated in recently days. Beltrami County, home to Bemidji, has seen a steady climb the past few weeks. The county reported 286 cases and one death as of Thursday.

Meatpacking operations had been hot spots for big outbreaks in southwest, west-central and central Minnesota earlier in the pandemic.

New cases have slowed considerably in recent weeks, although the problem has resurfaced recently in McLeod County (282 cases), where more than 20 employees at a Seneca Foods plant in Glencoe were identified recently in an outbreak.

Worries continue about the growth of COVID-19 among younger Minnesotans, including that those infected will inadvertently spread the virus to grandparents and other more vulnerable people.

People in their 20s remain the age group with the highest number of COVID-19 confirmed cases in the pandemic — more than 15,500. The median age of cases is 36.

State public health leaders are increasingly worried about college students joining end-of-summer parties and other gatherings that could feed the spread of COVID-19 and bring it onto campuses this fall.

Clusters of cases surfaced in late June around college bars, including in Mankato, Minneapolis and St. Cloud. Concerns over similar potential outbreaks are percolating again as the fall semester nears.

The Health Department this week posted additional guidance to colleges on ways to reduce COVID-19 risk.

Officials are asking students to self-isolate for two weeks before returning to campus, noting that the University of North Carolina, Notre Dame and Michigan State have been forced to retreat from their plans to teach in-person this fall amid campus outbreaks.

While colleges are working hard now to make their schools as safe as possible against the disease, Lynfield on Wednesday pressed students and young adults to take personal responsibility for their actions in the COVID-19 era.

“We’re not going to be able to test our way out of this pandemic,” she said. “Having a negative test doesn’t mean you now have a green light to go and socialize and not to keep the distance. We’re very concerned about the kind of messages — ‘Well, you can just keep testing and people can use their BC, before COVID, behavior.’ We have to work together.”