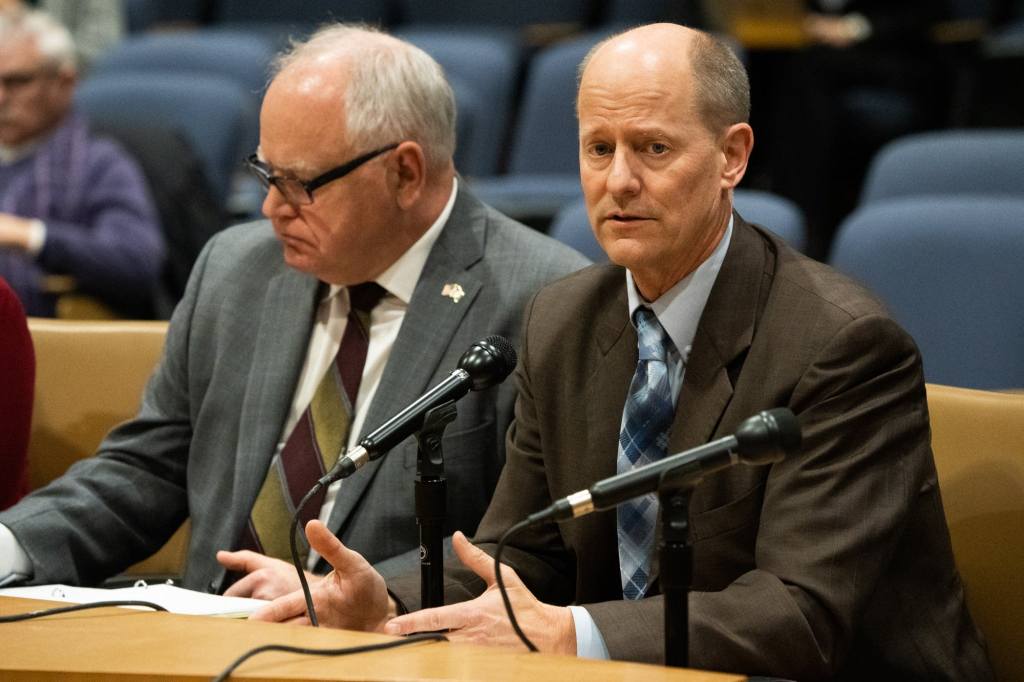 In a slap to DFL Gov. Tim Walz, the Republican-controlled Senate voted 34 to 32 Wednesday to reject the confirmation of Department of Labor and Industry Commissioner Nancy Leppink — meaning she is out of a job.

Republican Senate Majority Leader Paul Gazelka said Leppink, who had led the agency since February 2019, had not done a good job.

Gazelka accused Leppink of being hostile to businesses with regulation, citing incidents related to youth employment, wedding venues and enforcement of the state’s new wage-theft law.

“The Department of Labor and Industry has to have somebody that can connect to labor and connect to industry, and work with them in what feels like cooperation and not a hammer that’s about to come down every time they make a misstep,” Gazelka said.

Senate Democrats were incensed and caught off guard.

DFL Minority Leader Susan Kent said there was no advance warning about the vote.

“I want to say that I think this is outrageous,” Kent said. “It is a travesty, and it is absolutely not fitting of the Minnesota Senate to handle something of this serious nature without due notice that this would be discussed.”

Sen. Scott Dibble, DFL-Minneapolis, called the action an ambush and scrambled to defend Leppink by reading supportive comments from legislators, labor leaders and business people. Dibble accused Republicans of trying to get back at a governor they’re unhappy with.

“It shows an amount of irresponsibility with the majority that is really hard to contemplate,” he said.

Sen. Eric Pratt, R-Prior Lake, the chair of the Senate Jobs Committee, said the decision was about job performance, not politics. Pratt defended the timing and made a comparison to Cheri Yecke, who a DFL-controlled Senate rejected as Gov. Tim Pawlenty’s education commissioner 16 years ago.

“Let’s not forget, Commissioner Yecke was not confirmed at 3:40 in the morning,” Pratt said. “I talked to a few of the senators that were here, and they were given no advance notice.”

After the vote, Walz called Leppink a talented professional who did not deserve what Republicans did to her.

“And to have Nancy Leppink get caught in the middle of a petty political move puts Minnesotans in danger and it highlights the fact that I am so disappointed Senate Republicans are not taking COVID seriously and they’re not taking the safety of Minnesotans seriously,” Walz said.

Lawmakers were in special session again because Walz extended the peacetime emergency that he first declared in March to battle COVID-19.

Republicans oppose the extension. The Senate passed a resolution to end the peacetime emergency. But the DFL-controlled House did not. The special session ended after the Senate vote on Leppink.

Gazelka said he wants the Legislature working on an equal footing with the governor to address any additional matters related to COVID-19.

“We think this virus is real, is serious,” he said. “We need to be aggressive against it. But to allow the governor to use emergency powers like never before in giving up all of our liberties continue is a mistake.”

Earlier in the day, the state Executive Council gave its unanimous approval to extending the peacetime emergency first issued on March 13 for another 30 days.

Minnesota Health Commissioner Jan Malcolm told members of the council that the extension in necessary because rapid action is needed to keep things under control as the pandemic continues.

“The tools that are available to the governor to take such actions when needed to help us keep our current level of growth under relative control is very essential,” Malcolm said.