Funeral services for Stan Jensen will be held at 11:00 AM on Friday August 28, 2020 at Ascension Lutheran Church. For those unable to attend, the service will be live-streamed on Stan’s obituary page at www.BonnerupFuneralService.com. Visitation will be held from 5-7 PM Thursday August 27, 2020 at Bonnerup Funeral Service, 2210 E Main St, Albert Lea, MN. Interment will be in Graceland Cemetery with military honors accorded by the Albert Lea Area Veteran’s Association. 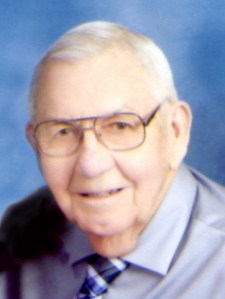 Stanley LaVerne Jensen, age 88, passed away peacefully on August 20, 2020 at St. John’s on Fountain Lake in Albert Lea, MN. He was born on April 11, 1932 to Arthur W. and Helga (Nelson) Jensen in Freeborn County, MN. He was baptized at North Freeborn Lutheran Church and confirmed at Our Saviors Lutheran Church in Wells, MN. He graduated from Freeborn High School in 1950. In 1952, Stan was drafted in the Army and served during the Korean War in Korea for 15 months with honorable discharge in October 1954.

Stan married his high school sweetheart, Alice Tukua, on May 3, 1953 at First Lutheran Church in Albert Lea, MN. He worked at Aronson Chevrolet dealership in Ellendale until 1955 when he was employed by Security State Bank in Ellendale. His banking career included 1st National Bank in Owatonna and Security State Bank in Albert Lea where he was known as “Silver Dollar Stan”. He retired from Produce State Bank of Hollandale and Albert Lea in 1994 after 40 years in banking. He, Alice, and their family were charter members of Ascension Lutheran Church where he started as financial secretary in 1963 and later served as President, Treasurer and on most council committees as well as building committees, bond sales committee and call committees. Other community involvement included committees within the Chamber and YM-YWCA, teaching banking courses, member of the Albert Lea Smallbore Rifle Team, Life Member of the N.R.A. and the D.A.V., 58 year member of the American Legion, VFW member, 40 year member of the noon Lions Club, Good Earth Bible Camp Society, and member of Early Ford V8 Club of America.

He enjoyed helping on his son David’s farm, family hunting adventures, camping with family and friends, family fishing trips to Gun Flint and family fly-ins to fish in Canada, competitive shooting, Gopher and NCAA basketball, gardening, and his 1946 Ford Super Deluxe Coupe which he poured thousands of hours into meticulously restoring by deconstructing and rebuilding from the bolts up. Most of all he enjoyed spending time with his lifelong best friend and wife, Alice, his sons, daughters, and grandchildren, who were all so very special to him. He and Alice went to as many of their grandchildren’s concerts, plays, and sporting events as they could; even receiving an award at a soccer banquet for attending every game.

After 53 and a half years in their Capital Lane home, Stan and Alice moved to St. John’s Waters Edge January 2017. As Stan’s health deteriorated, he was moved to the Woodlands August 1, 2019 where he passed away August 20, 2020.

In lieu of flowers, memorials may be sent to Ascension Lutheran Church, Youth For Christ, St. John’s Lutheran Home, and the Honor Guard.