Velma Eileen Wayne, age 95, passed away peacefully at her home at Whispering Oaks in Ellendale, MN on August 7th, 2020. Velma was born in Spring Valley, MN on December 1st, 1924 to Carl and Alma (Jeche) Jahn. She was the oldest of four. Velma’s family lived in various places around the Spring Valley and St. Paul area. She was valedictorian of her graduating class in Spring Valley and went on to graduate from Mankato Commercial College. She worked as a legal secretary at a law firm in Albert Lea, where she met her future husband, James Wayne of Ellendale. On December 12th, 1945, Jim and Velma were married in Spring Valley and then made their home on the Wayne family farm near Ellendale, MN where they farmed and raised 3 children. While working hard as a farm wife and mother, she also enjoyed working at the Clarks Grove Veterinary Clinic for several years. 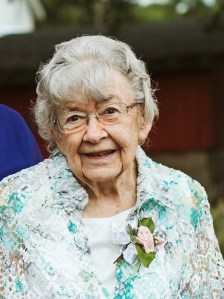 Velma loved her huge vegetable garden and various flower gardens. Velma was an avid quilt maker, especially with her quilting friends at the First Baptist Church of Clarks Grove, and she liked to sew. At church she was very active in the choir and often sang in a trio there. She also liked raising Siamese cats for a time. For many years, Velma and Jim enjoyed wintering in southern Texas.

Velma was preceded in death by her parents, her husband James, and her brother Carl. A private memorial service was held on Monday, August 10th.