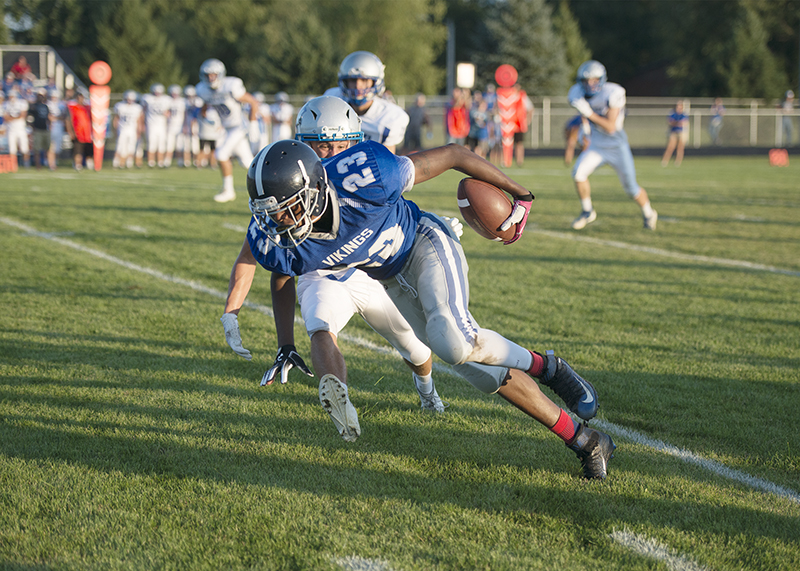 Northwood-Kensett senior TJ Whitelow turns and gets upfield after catching a pass early in the first quarter against North Iowa. The Vikings lost the game 38-21. - Tyler Julson/Albert Lea Tribune

After being shutout in the first half, the Vikings rallied for some points in the second, but ultimately  came up short 38-21.

The Northwood-Kensett defense got out to a hot start by forcing and recovering a fumble on the first possession. However, the offense was unable to capitalize after, going three and out and punting away the ball.

The Bison came away with a big 25-yard run on their next possession setting them up for a two-yard touchdown run to take a 6-0 lead. The two-point conversion attempt was no good.

The Vikings got a big boost of momentum on their next offensive possession when senior TJ Whitelow caught a deep pass from senior quarterback Kael Julseth. However, the offense sputtered from there and failed on a fourth-down attempt a few plays later.. 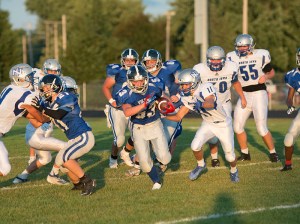 Senior Brandon Varner breaks through the line Friday night against North Iowa. Varner had two scores in the game including a kickoff return and a 52-yard rush. – Tyler Julson/Albert Lea Tribune

The Northwood-Kensett defense came up strong again in the ensuing possession by forcing a turnover on downs.

Starting near midfield, the Vikings used big runs from seniors Carter Severson and Brandon Varner to push the ball into Bison territory but another fourth-down stop gave the ball back to the Bison.

North Iowa wasted little time in putting more points on the board with a 35-yard touchdown run shortly into the next possession. The two-point attempt failed again to make the score 12-0 in favor of North Iowa.

The Vikings coughed up a fumble on their next possession after marching the ball into Bison territory and again the Bison took quick advantage by scoring another touchdown. This time a nine-yard run on fourth down.

The Vikings came close to tossing in a touchdown at the end of the half, but the receiver stumbled in the endzone and the ball fell to the ground.

Down 18-0 to start the second half, the Vikings needed a big play to get them back in the game. They didn’t have to wait long as Julseth took the ball himself for a 30-yard scamper into the endzone. A blocked PAT put the score at 18-6.

The Vikings’ defense got a nice stop on the next possession but a fumble on the offense nullified that stop.

The Bison took the very next play 30-yard for a touchdown through the air. Again the two-point attempt was no goof.

Varner was not ready to let the game get out of hand just yet, however, as he took the ensuing kick off all the way to the endzone for a score. The PAT was good, leaving the Vikings trailing 24-13.

The Bison scored again on their next possession and the Vikings answered with another 52-yard run from Varner and the two-point attempt after.

Still trailing 32-21, the Vikings needed stops. However, the Bison scored again midway through the fourth quarter to all but put the game away for good.

The Vikings fall to 0-1 on the season and will be back in action Friday when they travel to Clarksville.