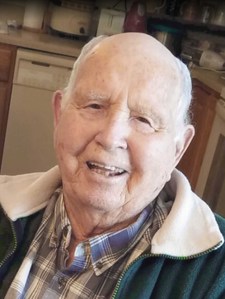 A private family service will be held outdoors at Emmons Lutheran Church in Emmons, Minnesota with Mr. Kermit Singelstad officiating.

Cremation will take place after the service with burial of the ashes at a later date in Salem Lutheran Cemetery in Lake Mills.

Virgil Ferris Holstad was born March 11, 1926, rural Delavan, MN to John and Edith (Nelson) Holstad. Virgil was baptized by Pastor Herman Anderson at Zion Swedish Lutheran Church, Mansfield Township, and confirmed by Pastor S.J. Fretheim at Bethel Lutheran, Vinje, IA. He attended country school grades 1-8 at the Gravel Pit School District 127 (Kiester Township), 3 years at Kiester High School, and graduated from Lake Mills High School in 1944. He attended St. Olaf College for 1 semester, but was hospitalized for a lengthy time with undulant fever, and did not return to school.

On March 24, 1946 Virgil married Helen Mae Bjelland at Salem Lutheran Church by Pastor Howard Blegan. They were blessed with three daughters-Vonice Marie, Julie Ann and Amy Jo. Virgil and Helen spent their life farming together-initially on three different farms by Emmons and one by Round Prairie Church until they purchased the “farm on the hill”, rural Twin Lakes, Minnesota in 1963. They were dairy and crop farmers, with poultry and hogs also. A big part of Virgil’s life was planting 10,000 trees on the farm leading to his “treeman” alias.

He was a voracious reader and loved all genre of books but a favorite was always Louis L’Amour. Being active in the community was important to Virgil. He held numerous offices in church, dairy associations, township boards, senior citizens, Sons of Norway, etc. His niche was that of ushering at church because Virgil was the ultimate greeter. He was very social and valued relationships. He loved and was proud of his children, grandchildren and extended family as well as his many friends (young and old), members of his church family, and pool playing comrades.

Special times in Virgil and Helen’s lives were spent playing cards with friends and grandchildren. Both of them loved square dancing and ballroom dancing, and enjoyed the fellowship with those friends for many years. Many miles were traveled in their motorhome all over the United States. They were snowbirds to Texas, Arizona and California from 1990-2008. The couple also traveled to Norway twice, Germany, Switzerland, and Austria. The highlight of their life was a family trip to Norway and Sweden to the ancestral farm in 2005.

Virgil was a proud Norwegian. His biggest passion was genealogy with countless hours spent researching and documenting his family tree. Upon introducing him, his common question to most was, “Aren’t you related to so-and-so?”. It brought him great joy to pass on the tradition of making Swedish meatballs with his family.

He was a loving son, brother, husband, father, grandfather and friend to all, who always had a piece of candy or a coin in his pocket to share…and maybe a whisker rub.

Virgil was a man of faith before all else. He was a wonderful example of a man who lived with integrity, honesty, wisdom and love for all.