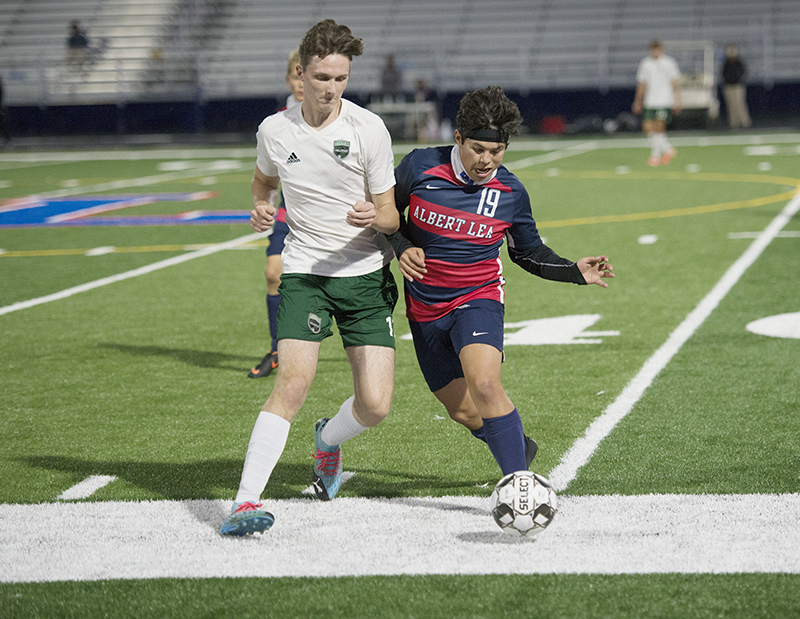 Albert Lea junior Jared Turrubuartes fights for control of the ball Tuesday night against Faribault. The Tigers dropped the match 3-0 after falling into a quick hole in the first half. Tyler Julson/Albert Lea Tribune

After a tough match against Austin Saturday, the Albert Lea boys’ soccer team hosted Faribault Tuesday night in an attempt to find its first win of the season.

After falling in a quick hole to start the game, however, the Tigers were never able to recover, eventually falling to the Falcons 3-0.

Faribault scored its first goal just over a minute into the contest when a penalty kick made its way into the net.

Senior goalie Caleb Hanson made a few nice saves in the next minutes, not allowing the Falcons to grow their lead any larger than one goal. 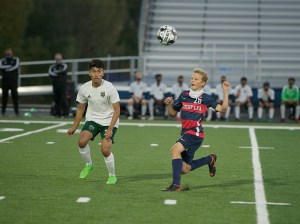 Freshman Aiden Hartman runs under a ball Tuesday night at home against Faribault. The loss drops the Tigers to 0-6 on the season. Tyler Julson/Albert Lea Tribune

Sophomores Tim Chamlers and Joseph Yoon each took a couple attempts at a corner kick in the remainder of the first half, but none of them would end up posing much of a threat.

The closest the Tigers came to a goal in the first half was a shot from junior Jared Turrubiartes, which narrowly missed the goal, sailing just to the left of the post.

Faribault took two corner kicks and had a player whistled for a penalty and given a yellow card as the clock expired to halftime with Albert Lea still trailing 1-0.

The Falcons came out again in the second half and scored about one minute into play to take a 2-0 lead.

Faribault came close to scoring again just two minutes later, however, Hanson made a nice save to keep that from happening.

With 20 minutes left in the match, the Falcons took a commanding 3-0 lead on a crossing kick that was nearly saved by Hanson.

The Tigers failed to get any momentum offensively in the second half and were unable to get a good look at the goal.

The Tigers fall to 0-6 on the season and will play again Friday when they host the Panthers of Rochester Century.