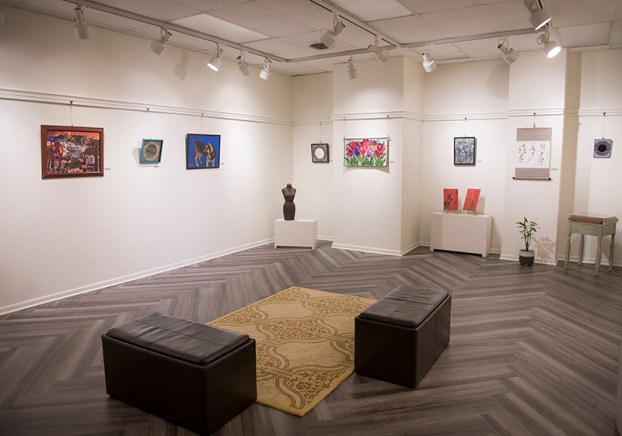 The Freeborn County Arts Initiative has opened its next exhibit, “Creating in Place,” which focuses on work artists have created during shelter-in-place orders amid the COVID-19 pandemic. - Colleen Harrison/Albert Lea Tribune

The Freeborn County Arts Initiative has opened its next exhibit, which focuses on work artists have created during shelter-in-place orders amid the COVID-19 pandemic.

“This exhibition is a testament to the hopefulness and endurance of our struggling artists,” a press release announcing the show stated.

The exhibit, “Creating in Place,” is open now through Oct. 30, and is made up of work from about 13 different artists, some local and others from across the Midwest.

She highlighted a quilting piece entitled “Glorious Tulips” by Kathy Weed of the Northfield area, saying the piece differs from the usual quilting process. Crane said Weed created it “out of her head” instead of plotting it out by numbers like many quilting projects do.

“It is beyond quilting,” Crane said. “It’s three-dimensional, it moves outside of its borders.”

“You can see just how different artists are doing mentally and emotionally,” he said.

Both Marin and Crane highlighted a piece entitled “The Persistence of Masks” by Marla Klein. The piece takes Salvador Dali’s infamous “The Persistence of Memory” painting depicting melting clocks as a base. Instead of the clocks, Klein photographed surgical masks and photoshopped them into the depiction of the painting. 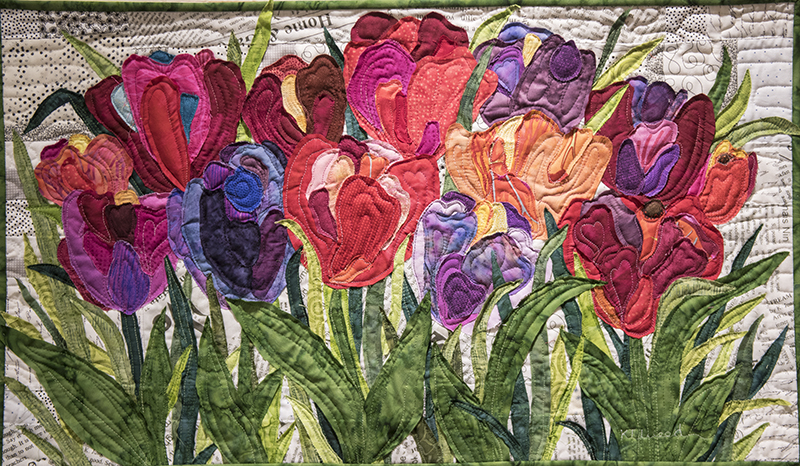 Kathy Weed’s “Glorious Tulips” will be on display as a part of the exhibition. – Colleen Harrison/Albert Lea Tribune

“Some of the work that came in is really tongue and cheek,” Crane said.

While some works look to lighten the mood amid the pandemic, others choose to bear witness. A prayer shawl created for the show uses deep reds and maroons, representing a blood moon.

In addition to viewing the different works, those visiting the show will also be able to take home an original mask of their own thanks to Arts Initiative board member Karen Mattson. Some of Mattson’s masks are on display in the show as well.

The gallery is open to the public from 1 to 4 p.m. Saturdays in the Bessesen building, 224 S. Broadway Ave. in downtown Albert Lea, or by appointment. Those visiting the gallery in person will be required to wear masks and respect social distancing guidelines.

For those not quite ready to view the works in person, a virtual tour will be forthcoming, according to the press release. Marin said the virtual concept has come into play quite a bit for the Arts Initiative, as it has hosted other programming online as well. Open mic nights are hosted regularly on the Arts Initiative’s Facebook page, and the last open mic night had at least 3,000 views. Another open mic night is planned for the week before Halloween, and other programming and classes should be coming in October as well.

“It’s all aimed at keeping our patrons, our visitors and our artists as safe as possible,” he said.

Freeborn County reported its fourth COVID-19 death on Friday in the daily update from local and state health officials. The... read more