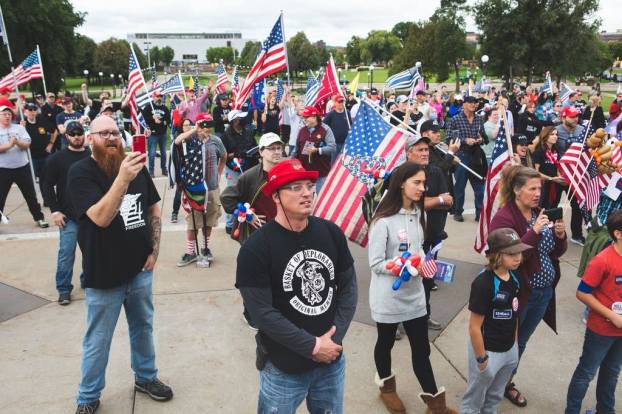 Demonstrators rally on the steps in front of the Minnesota Capitol on Saturday. People rallied at the Capitol to show support for President Trump and local law enforcement, and to protest Gov. Tim Walz's COVID-19 state of emergency. Ben Hovland for MPR News

More than 100 people rallied outside the Minnesota Capitol in St. Paul on Saturday in support of President Trump, and against statewide pandemic policies they say are infringing on personal freedoms and damaging the economy.

The “United We Stand & Patriots March 2020” event was organized by a group called the Minnesota Patriot Alliance. Among the attendees were some who drove tractors 200 miles from Menahga and Wolf Lake, Minn., calling for an end to Gov. Tim Walz’s COVID-19 state of emergency.

The group marched from near the Cathedral of Saint Paul to the Capitol grounds, singing and carrying flags. Some in the crowd carried long guns and wore body armor.

State troopers separated the group from about 14 counter-protesters, two of whom they arrested about two hours into the event. Otherwise there were no reports of physical confrontations or violence.