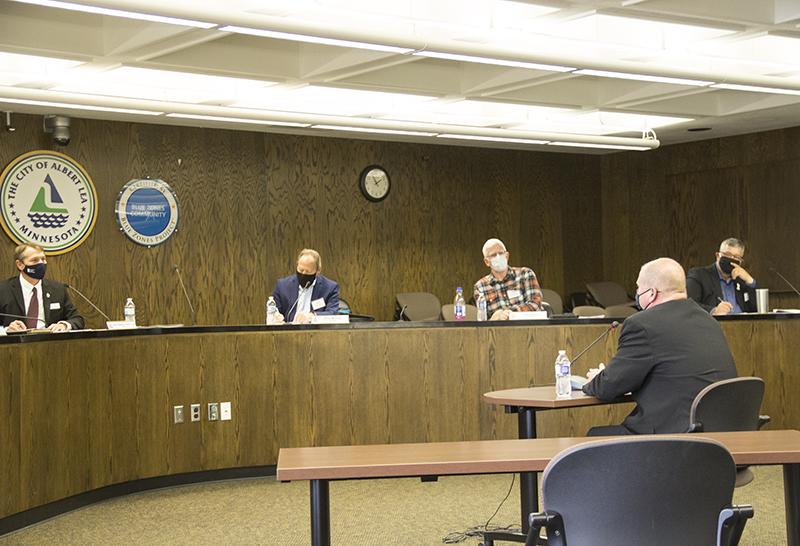 The Albert Lea City Council voted Thursday evening to offer the position of city manager to Patrick Rigg, the city administrator and finance director in Evansville, Wisconsin, after four candidates spent a full day in interviews with community leaders, city employees and the council.

Several of the councilors said they thought any of the four candidates they interviewed for the job would do well in the position, but after some deliberations and then a break, six out of the seven councilors named Rigg as their top choice. Third Ward Councilor Jason Howland listed him as his second choice but said he would still support him in the position.

All councilors all ultimately voted to move forward with negotiations with Rigg.

The council is looking for a new manager after former Albert Lea Manager David Todd resigned at the end of May for personal reasons.

After coming out of the interviews Thursday evening, the councilors were initially split on their favorites. They each identified their top two selections, with Rigg and Thomas receiving the most mentions, though Anderson and Hanson were identified as top picks for two councilors.

Mayor Vern Rasmussen said he thought Rigg did well in his interview and has shown great perseverance in his life.

Sixth Ward Councilor Al Brooks said he thought Rigg would fit in well and that although Rigg is coming from a smaller community, he thinks he has the drive to succeed and would go the extra step in the position.

Third Ward Councilor Jason Howland noted Rigg and Hanson were his top two candidates and were the top picks among the department heads, as well. They also received favorable comments from the community members who interviewed. He said department heads were worried about Anderson, which in turn made him nervous about hiring him.

First Ward Councilor Rich Murray said he had listed Thomas slightly ahead as his top pick initially but that a few things staff talked about and a few calls and emails he received gave him some concern. He said he recognized anyone in city management is likely going to have some people who aren’t happy with them and noted it should be taken with a grain of salt. 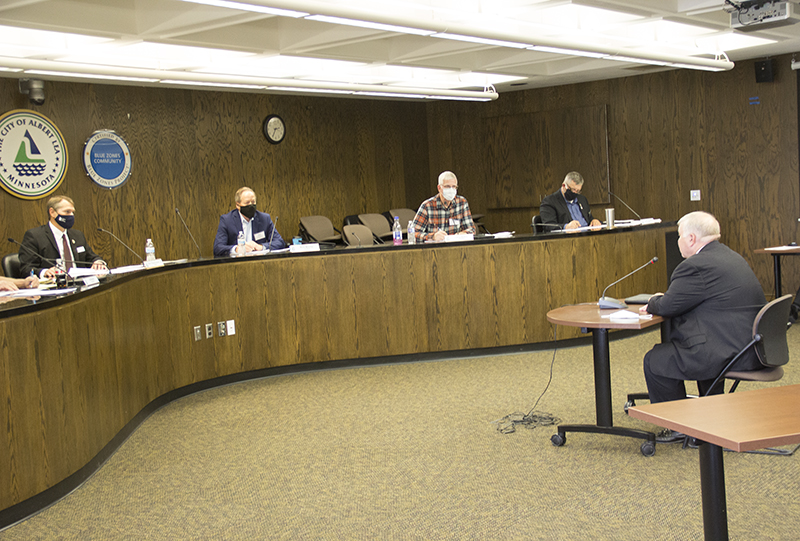 A few other councilors also noted Thomas’ experience as a plus.

Rigg said he was interested in the position because he saw an opportunity to apply his skills and also believed the position would be good for his own professional development. Rigg, who has been in his position in Evansville for six years, previously served as city administrator/clerk in Eldora, Iowa. He has a bachelor’s degree in political science and a master’s degree in public administration.

He said he has creativity to come up with solutions to problems and is a big believer in development of staff, who he described as the organization’s most important resource. When asked about his supervisory and management style, he said he generally tries to be relaxed and tries to be empathetic toward his employees. He also talked about the importance of making sure his staff feels valued and of respecting multiple viewpoints. For a team to be successful, he said that the team needs to meet on a regular basis and be reminded of its top priorities.

“A lot of being successful is reminding people and bringing them back to core values, beliefs and common purposes,” Rigg said.

He said he thinks the relationship between the city manager and the council will vary from council to council but he would always start out by taking the lead from the council and mayor on policy. He said the most important thing is having a trusting relationship and providing the council with the proper information needed to make smart decisions.

He also talked about the importance of keeping trust with the public.

He said the city should focus on the beauty in the community, including the lakes and recreational opportunities here.

“Just keep that front and center,” he said. “It’s quite amazing what you have here.”

On the other side, he noted, it’s important to find areas that might seem forgotten and find ways to improve them.

When asked why the council should select him as the next city manager Rigg shared some of his background. He said when he was 16 he had the choice of being homeless with his mother or moving in with his father who had a serious drug addiction. Though he had a roof over his head living with his father, that led to some bad decisions and eventually he got in trouble with the law.

“By all rights I should have been some statistic,” he said.

Once he hit a certain point, he realized he had to change and worked his way back. He said it was not easy and it took a lot of hard work, but noted that where he was and where he has come from have ingrained in him the importance of persevering, having hope and having faith that he can and will do better.

“That’s how I try to approach things,” he said.

Thomas said he was interested in the manager position because Albert Lea was a lot like the community he previously led in Claremore — with similar budgets, populations, vision and drive — but the difference is Albert Lea already has a strategic plan in place and knows where it is going.

When asked about his supervisory and management style, he said he’s not one to micromanage but believes in giving staff the tools it needs to get the job done. Having said that, he said he’s not afraid of getting out and mingling with his employees.

“That’s not to say we don’t always have to agree,” he said, but noted the importance of treating each other with respect and not holding grudges.

He said he thinks it’s important to work every day at creating a work environment where people want to come to work, and it is important to let employees know they are appreciated. When he first arrived in Claremore, he said he looked at the pay scales and raised wages for many workers.

He said he hoped his actions would speak clearly about his level of integrity and his commitment to the city. He said his department heads in previous positions would say his word is his bond.

“That’s been my mantra my entire career — if I say I’m going to do something, I will move heaven and earth to make it happen.”

He identified his strengths as finance, economic development and people skills and talked about how he helped build up Claremore’s reserves. He said the city is in better shape today than it was when he got there.

He also talked about his efforts to bring a Chick-fil-A to the community there and said it would be a goal for him coming to Albert Lea, as well.

He referenced two sides of economic development: retail and workforce development. He said selling the community is a full-time job and often reminds his employees that everyone is an ambassador.

“When we make a disparaging remark on Facebook, it’s a reflection on the entire community,” Thomas said, noting he would encourage people to be mindful of what they post on Facebook and what comments they make in the newspaper.

When asked about additional priorities he saw for the city, he talked about continued dredging and recruiting more businesses downtown.

He said he is passionate and loves local government and thinks he can meet the expectations the city has for its next manager.

He briefly addressed what he described as “activists” who had contacted the city leaders from Claremore. Without going into detail, he said the key for him is knowing every night when he goes to bed that he can look in the mirror and know he has served with integrity and that he cared about the people he served.

In addition to his time in Claremore, Thomas served in the cities of Kingston, Massachusetts; West Warwick, Rhode Island; Old Orchard Beach, Maine; and Sterling, Colorado. He has a bachelor’s degree in political science/communications and a master’s degree in public administration.

Hanson, who said it was his dream to be before the council, said his interest in the community ran deep as his father had family in northern Iowa and he remembers being close to their home when they reached Albert Lea. He said the location of Albert Lea would be a good midway point to his family in Iowa.

He said while the council had other good candidates before them, he thought he was the best candidate based on his experience for economic development.

He described himself as a task-driven collaborator in his role as a supervisor and said he thinks the manager and council’s relationship stems on trust.

“You communicate, and when you make a mistake you own it,” he said.

Hanson said he would build trust with the council and staff by communicating well, owning his mistakes and supporting the council’s decisions. He noted that good leadership is important from the top down.

He also supported increased training for employees and said he would never “throw a council member or an employee under the bus.”

He saw other priorities for Albert Lea to include continued dredging of the lakes, continuing development of the downtown and improvements to the City Arena.

He said his own community was also undertaking a smaller dredging project and recently brought in a new pavilion and redeveloped a park near their lake.

Prior to his time in Mondovi, Hanson served as city administrator in Onawa, Iowa, and Bridgeport, Nebraska. He is also self-employed with Bradley J. Hanson Consulting and has a bachelor’s degree in aviation technology and a master’s degree in public administration.

Anderson said he thought Albert Lea is a dynamic community and is amazed at the size of Albert Lea and what it has to offer once people come into town.

He said he thinks he could bring the most to the table because of his experiences — from park and recreation management to being a leader in administration. 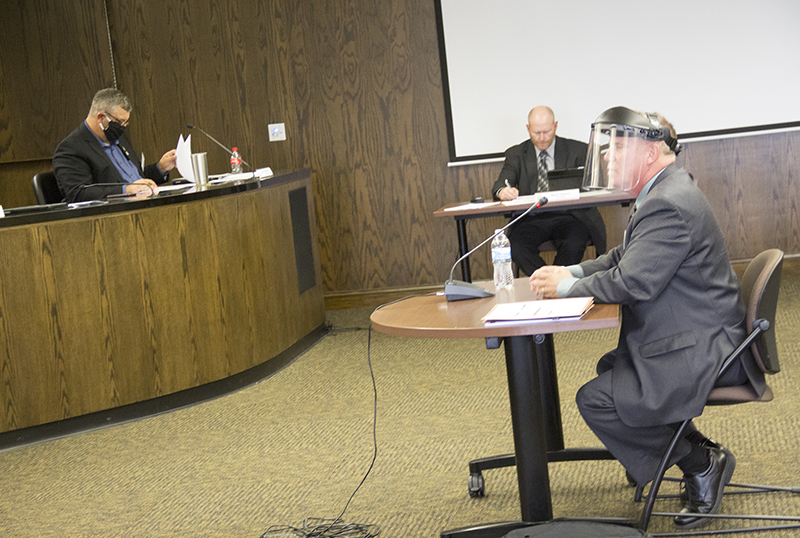 He described his supervisory style as one that is inclusive and where he likes to get people together and collaborate and understand others’ perspectives.

He said he would create a work environment where people want to come to work by having honesty and respect and making sure employees have the tools they need to do their jobs.

He also talked about the importance of getting to know people outside of work when the opportunity arises and in building trust.

Regarding budgeting and long-range financial planning, he said it is a process that should be addressed on a day-to-day basis and that should include department heads and other employees.

He described himself not as a “yes man” but as a “can-do guy.” He said he could bring straight-faced honesty and has experience to bring to the community.

In addition to his job in Sibley, Anderson is employed at Lake Life Skills as a program assistant and is self-employed with High Point Consulting. He previously was city administrator/economic development director in Ackley, Iowa, and economics development director in Lyon County, Iowa. He has a bachelor’s degree in education and social sciences.

Gary Weiers, management consultant for David Drown Associates, who the city hired for the search, said he planned to notify each of the candidates later that evening about the council’s decision and would work with a few of the councilors on negotiations with Rigg.