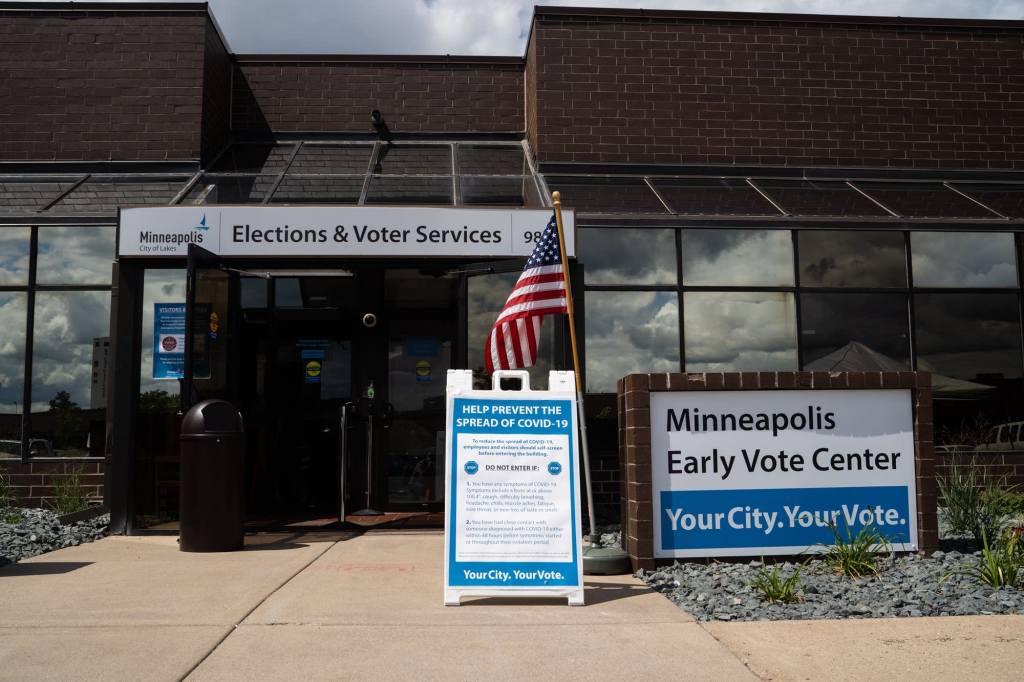 A sign outside of a Minneapolis early voting center on Aug. 3 warns voters not to enter if they have symptoms or have been exposed to COVID-19. Early and absentee balloting opens Friday in Minnesota. Election administrators and political party leaders suspect a lot of voters will cast ballots early because of the pandemic. Evan Frost/MPR News

Patrick Gordon has been on a countdown to the day he’ll cast his 2020 ballot.

Gordon wants to avoid Election Day crowds because of a chronic respiratory condition. And he doesn’t trust that a mailed-in vote would get there without a hitch. So Friday morning, the retired factory worker planned to throw on a mask and head from his house outside the northwestern Minnesota city of Roseau to the county courthouse as early voting begins.

“I feel this is the safest way for me to cast my ballot, and it will be counted,” he said.

He’ll encounter plenty of political markers on the drive in, including a semi-truck on the edge of town adorned with a banner promoting President Donald Trump.

“You drive around my county up here and you’re going to see Trump signs, Trump flags everywhere,” Gordon said.

But he’s just as emphatic about his vote — for Democratic presidential nominee Joe Biden. “Trump’s gotta go,” he said.

Election administrators, political party leaders and campaign officials suspect a lot of voters will cast ballots early this year. The ongoing coronavirus pandemic still has people jittery about standing in lines. And many have their minds made up.

“We really are urging people who do know earlier — there are folks who know a week out, two weeks out, a month out and nothing or no one will change their mind — get that ballot in as soon as you can,” said Secretary of State Steve Simon, a Democrat. “The earlier the better all around. It makes it easier for the voter. It makes it easier for elections administrators.”

Simon predicts one-third or more of Minnesota voters — at least a million of us — are expected to vote ahead of Nov. 3.

So far, more than 920,000 voters have requested an absentee ballot this year, according to the secretary of state’s office. To put it in context, just shy of 680,000 voters cast absentee ballots in 2016 out of about 3 million total votes.

The change in voter behavior has forced adjustments from the campaigns and parties.

“Our get-out-the-vote would typically start three to four weeks before the election,” he said. “Now we’ve moved up all of that because we know that our persuasion window is much shorter than it’s been in the past. We’re in get-out-the-vote mode.”

Martin’s party is using phone calls, text messages, emails and social media to prod people to vote as soon as they can.

So are state Republicans.

“Recently President Trump’s campaign sent you an absentee ballot request form,” a party activist said at the onset of a phone message left on a voter’s voicemail recently.

It was placed by the Minnesota Republican Party, which is spraying out calls to people who previously got mailings with absentee ballot applications. It’s a tightrope for the party, given that Trump himself has railed against broad-based mail voting in this year’s election.

Trump distinguishes absentee voting from universal mail voting because people must seek out a ballot and take steps to verify their eligibility.

Minnesota Republican Party Chair Jennifer Carnahan said the push on her side is more intense than past years. But she acknowledges that many Republican voters want to cast ballots in more traditional fashion to demonstrate that COVID-19 shouldn’t shut down society.

Carnahan said she personally plans to wait to vote.

“It’s meaningful to me to fill out my ballot and submit it into the machine,” she said. “I think it’s one of the greatest freedoms we have as Americans, and I want to do that in person.”

If past years are any guide, details will emerge between the start of early voting and Election Day about where absentee ballots are coming from — but not who those people voted for. That information won’t come out until Election Night.

“People need to be cautious about reading into those results too early. We will expect very high, high participation on the DFL side for early voting and absentee whereas on our side we’re expecting a majority of our people to go in on Election Day,” she said.

There are a couple of pandemic-related changes to the process this year.

First, there is a shorter window to claw back a ballot if voters change their mind or a race is somehow altered.

Usually, voters have until up to a week from the election to substitute an absentee ballot; this year they’ll be locked in two weeks out. That’s to give election authorities more time to process ballots given the increased volume.

A second change benefits voters who wait until the last minute to mail a ballot back. As long as they’re postmarked by Election Day, properly cast ballots can be counted for up to seven days after.

Secretary Simon said it means people will have to be patient when waiting for final results, although he expects most outcomes to be apparent then.

“It will take longer than just Election Night to count and even to gather all of the results,” Simon said. “And I just want folks to know when that happens — not if, when — that is literally by design.”