Judith B. Brown, 83, of Mankato, died peacefully at home surrounded by family on Thursday, September 24, 2020.

She was born on July 24, 1934 in Albert Lea the daughter of Alfred and Jean Davis. Judith graduated in 1955 from Albert Lea High School and graduated from Austin Community College in 1995. In March of 1957, she married Sidney J. Brown. The couple raised their four children in Austin. 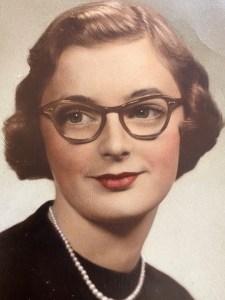 Judith played violin, enjoyed knitting, music, singing in the church choir and watching the Minnesota Twins. She donated her knitted hats to orphanages and donated food to troops in Afghanistan. Her faith and church were important to her. She worked at St. Mark’s Nursing Home, the Hallmark Store and Waldenbooks.

She is survived by her husband of 63 years and her children Sara Sayles of Austin, Beth Brown (Doug) of South St. Paul and Steven Brown of Elysian. 9 grandchildren, 7 great grandchildren.

She was preceded in death by her parents, two brothers, her daughter, Nancy J. Emerick in January of this year and one grandson.

Per Judith’s request, no visitation or funeral will be held. Memorials are preferred to the Westminster Presbyterian Church/Music Program in Austin Minnesota.