An Albert Lea man was arrested Tuesday night and is being held in the Freeborn County jail on multiple charges after leading police on a pursuit in southern Albert Lea. 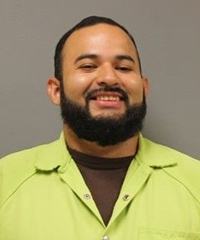 Miguel Angel Munos, 32, was arrested on charges of fleeing police in a motor vehicle, an order for protection violation, criminal damage to property and fourth-degree driving while intoxicated.

According to a press release, at about 8:20 p.m. Albert Lea police officers were investigating an order for protection violation in southern Albert Lea when they found the suspect driving a vehicle in the area where the report was being taken.

Officers attempted to stop the vehicle, but the driver did not stop and a pursuit ensued.

The press release stated Munos allegedly drove in opposing lanes on Southeast Broadway and U.S. Highway 65. The pursuit also went through the residential neighborhood east of South Broadway and then eventually into the southern half of downtown by the Freeborn County courthouse.

Munos allegedly attempted to enter onto Interstate 35 at mile marker 8 going the wrong direction up an exit ramp.

The vehicle he was driving collided with an Albert Lea police car before entering I-35 , and the pursuit came to an end in the ditch along the exit ramp.

Munos was arrested and taken to Mayo Clinic Health System in Albert Lea for injuries deemed not life-threatening.

An Albert Lea police sergeant was also treated at the scene by paramedics.

Police stated speeds reached as high as 50 mph in the residential areas and as high as 90 mph on Highway 65. The speeds prior to the collision are unknown.