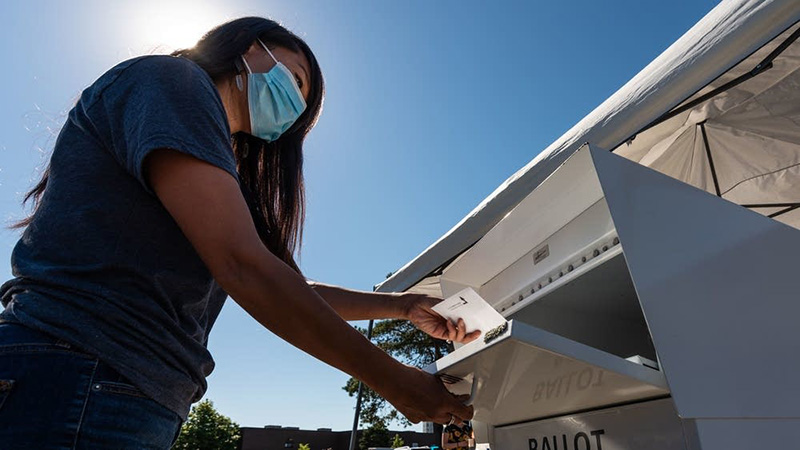 The Minnesota Supreme Court is expected to rule quickly in a case that determines how much assistance voters can get with their ballots after arguments Thursday over the goals of easing voting and discouraging election mischief.

In a virtually held oral argument, justices pressed Democratic and Republican attorneys on the pair of laws, which are currently suspended under a temporary injunction from a lower court.

The case is one in a sprawling battle over the way the 2020 election will be conducted. A swift decision is likely because absentee voting starts Sept. 18.

This lawsuit involves restrictions on help voters can get to read or mark a ballot if there are language barriers or a disability; a long-standing law limits a person from assisting more than three voters in a given election. A separate law poses the same limit on collection or delivery of absentee ballots.

The national and Minnesota Republican parties have appealed the Ramsey County District Court ruling that put the laws on hold. Attorney John Gore told justices they serve a vital purpose and shouldn’t be upended now.

“It’s simply too late in the game to be changing the rules of the election this close to an election because there’s an inordinate risk of voter confusion and loss of confidence in the integrity of Minnesota’s elections if the rules can be changed so late in the game,” Gore said.

Justice Margaret Chutich said federal voting rights laws contemplate that some voters need assistance and waiting for one to experience harm could be too late. She offered the example of a multigenerational Hmong family where one person speaks English and wants to help other members of the household but is bound by the limits.

“We can envision these direct conflicts where Minnesota is, it seems to me, impermissibly narrowing the federal act,” she said.

Gore said it’s up to the Democrats, who initially sued to stop enforcement, to prove that the laws have unduly burdened people from casting ballots.

He appeared to have an ally in Chief Justice Lorie Gildea, who pressed Democratic attorney Bruce Spiva on the point.

“If there really was an impact on voters it just doesn’t seem to me to be difficult for your client, who after all is the plaintiff and has the burden of proof here, to find a voter from 20 years ago or two years ago to come forward and say, ‘I couldn’t vote,’” Gildea said to Spiva. “And that’s troubling to me.”

Spiva said federal law doesn’t require such a demonstration and urged that justices err on the side of easing election participation.

He said hundreds of thousands of voters, some who speak little or no English and others who have a physical disability, could be affected by the ruling.

“We don’t have to show absolute disenfranchisement,” Gore said. “Most of our evidence I think shows a pretty severe need and burden in these communities.”

Justice Gordon Moore questioned lawyers about whether the rules relaxation should be viewed differently in light of COVID-19. Voting by absentee ballot prior to Election Day is likely to be substantially higher this year as people seek to avoid crowded polling places.

“How should or should the court weigh the circumstances of the upcoming election, the pandemic, the concerns regarding the postal service that have been discussed?” Moore asked.

Gore noted that the case predates the outbreak of the coronavirus in Minnesota. He held election integrity up as the foremost concern.