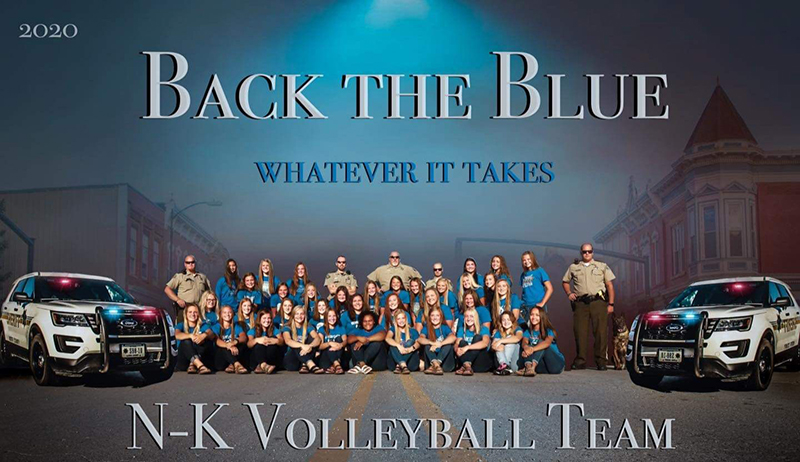 The Northwood-Kensett volleyball posed with the Worth County Sherrif’s Department for a poster, but the poster has caused controversy. - Provided

After receiving backlash, a Northwood photographer has decided to not sell a volleyball poster made in conjunction with the Northwood-Kensett volleyball team and the Worth County Sheriff’s Department.

The poster was intended to express mutual support between the Northwood-Kensett volleyball team and the police. It featured members of the Vikings volleyball team, posed in front of Worth County deputies, with the phrase “Back the Blue” and “Whatever it Takes” placed above them.

The plan was to sell the poster to help the team raise money for a post-prom celebration, but after online backlash, photographer Jodie Bachtle decided to not put the posters up for sale.

The phrase “Whatever it Takes”  has been used as a team mantra this season by the Northwood-Kensett volleyball team, but in light of the recent protests across America regarding police killings, some on social media derided the poster as insensitive. The photo was taken by photographer Kat Polfer, but Bachtle, who directed the project, made the decision to shelve the posters.

“The intention behind this poster was far less politically motivated than I could even explain,” Bachtle said on Facebook, in part. “I am so incredibly proud of our local police/fire/rescue and felt that today, 9/11, was a great day to have the posters ready to go. As some of you may or may not know, the reverse side shows our fire department. ‘Back the Blue’ was our police standing behind our vb girls in BLUE and showing them support. ‘Whatever it Takes’ is exactly what the girls say when they are on the VB court. It is their slogan this year.

“I acknowledge that the wording has caused a serious backlash and this is completely my fault.”

On Friday afternoon, Michael Crozier, superintendent of Northwood-Kensett schools, sent out a press release regarding the poster:

“On August 12, 2020, a local photographer, in conjunction with a committee of parents raising money for post-prom, took a group photo of the Northwood-Kensett volleyball team along with local law enforcement. The words ‘Back the Blue – Whatever it Takes’ were featured on the poster as an expression of the team’s mantra of ‘whatever it takes’ on the court.

“While not the organizers of the project, the Northwood-Kensett district recognizes that some may perceive this as insensitive given the environment we are in as a country. Although our law enforcement are held in the highest regard in our communities, we also recognize the value of the social justice movement and what it means to so many.

“We hope that this incident can be viewed as an opportunity for growth and learning for all involved. As the superintendent, ultimately it is my responsibility to ensure oversight of projects involving our athletes and students. We will work collaboratively with all involved to examine our procedures and improve going forward.

“At the end of the day, we are all Vikings. Let’s use this situation to grow stronger together.”

In a Facebook message to the Globe Gazette, Bachtle said she has received support from the community, but because of how the posters were interpreted, she alone made the decision to pull them from circulation.

“I’ve had an outpouring of love and support,” she said, in part. “Many people offered to donate to the post prom and many offers of $250 or more to buy just one. I have also received negative comments and once that started, I realized how the posters were interpreted and immediately made my OWN decision to pull the posters from selling them. I admit that the wording would be hard to understand for some, but that wasn’t in my thoughts when it was being created.”