Records shed light on Guard call-up during May chaos 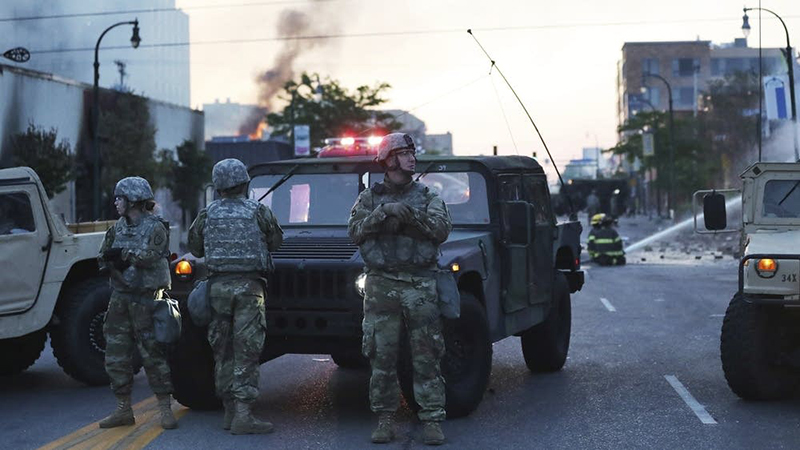 The Minnesota Department of Public Safety is looking for an outside evaluator to review the state's reponse in the aftermath of the killing of George Floyd. Photo courtesy Minnesota Public Radio News

Minnesota’s Department of Public Safety advertised Tuesday for an outside evaluator to independently review the role of state entities in responding to civil unrest and riots after the killing of George Floyd as more details emerged about what was happening behind the scenes.

The comprehensive report, which would be due next year, is expected to cover collaboration between several state agencies and local entities that dealt with many days of upheaval following Floyd’s killing by Minneapolis police on Memorial Day. Timelines, strategic plans and tactical decision making will all be analyzed, according to a solicitation put out by the Public Safety Department.

Public Safety Commissioner John Harrington told a Senate committee this summer that a deep dive into the performance of various agencies was in the works, or as he put it then, “a hot wash at least to look at lessons learned.”

The work plan anticipates “recommendations to help state and local agencies further improve the effective response to future complex, safety challenges.” The goal will be to have a contract signed and work begun by November with a final report four months beyond that.

How fast state law enforcement and the National Guard were pressed into action remains a source of political controversy and campaign fodder.

The materials detail internal deliberations and communications with legislators, city leaders, affected groups and others as buildings burned, businesses were looted and confrontations across the Twin Cities raged.

In August, the city of Minneapolis released a batch of text messages, emails and other materials that suggested the state was slow to react. Mayor Jacob Frey told the Star Tribune that Walz hesitated in his response; Walz said at the time that city officials failed to articulate a plan needed to successfully deploy the Guard in a complex situation.

Thousands of members of the Guard eventually were sent to Minneapolis and surrounding cities to help restore the peace.

Calls and messages were pouring into the governor’s office to the point that 5,000 voicemails had accumulated and more calls were coming in than could be handled, according to the newly released documents. Many urged that the Guard be sent in.

Three days after Floyd’s death provided the spark for widely attended demonstrations seeking justice and also for charged gatherings that devolved into mayhem, one email captured the unease.

Louise Matson, executive director of the Division of Indian Work, wrote a contact in the governor’s office that described herself “in tears” and saddened by the smashed cars, windows, glass and garbage all over” the Lake Street neighborhood where the nonprofit is located.

“Many of the staff here, including me, live in south Minneapolis and heard gunfire, sirens, lost power or witnessed the destruction,” Matson wrote. “I am worried about tonight.”

She asked in a group text message that included Lt. Gov. Peggy Flanagan if there were plans to have the Guard out as a layer of protection.

The newly disclosed documents indicate that preparations for a Guard deployment had already begun the night before. But plans were for the troops to move in by the weekend.

The actual deployment of soldiers was sped up to Thursday, May 28. It was the same day Frey wrote a letter to Walz with a request for the Guard to step in and assist local authorities; Frey had placed a call to Walz the night before to seek Guard help as the situation deteriorated. Minneapolis Police Chief Medaria Arradondo had emailed Harrington the prior evening with a Guard request, too.

Similar requests were made by other entities, including the Dakota County sheriff who expressed concern about critical infrastructure and government centers in Hastings, West St. Paul and Apple Valley. The chair of the Metropolitan Airports Commission asked to have the Guard on standby.

Walz announced that Thursday that he had activated the first wave of troops. In addition, 200 state troopers and dozens of Department of Natural Resources conservation officers were also directed to the hardest hit areas.

In crafting a news release about the decision, Walz’s Chief of Staff Chris Schmitter offered a suggested amendment.

“Shouldn’t we say protect people of Minnesota, since it’s not just about Minneapolis?” Schmitter wrote other senior aides to the governor. “Minneapolis made the request but we’re now coordinating with other law enforcement agencies and cities about using the Guard and State Patrol, is my understanding.”

About 320 soldiers were mobilized initially, with some ready to be in place before sunset “so they can become familiar with their environment prior to darkness,” wrote then-Adjutant General Jon Jensen.

Exact orders were on hold “until we see the Minneapolis plan,” he wrote, adding, “We’ll be able to fill in the gaps once an employment plan is developed by Minneapolis.”

The early plan was to bring weapons and ammunition to nearby armories but not have them with soldiers unless requested by the city and approved by the governor.

That changed hours later when the National Guard was alerted by the U.S. Defense Department of a TikTok message that caught the attention of the FBI.

Twenty minutes later, Jensen emailed Schmitter to relay what he called “a credible threat to the MN NG (Minnesota National Guard) and constitutes a strong rationale to arm the NG.” Commissioner John Harrington chimed in that it “seems like a prudent action,” citing the amount of looting and armed protesters observed on Lake Street.

Whether to arm soldiers was just one of the considerations for Walz and advisers. They were sensitive to inflaming the situation further with an overwhelming display of law enforcement. Talking points distributed internally stressed that the Guard wasn’t being deployed to make arrests or squelch free speech.

“The Guard is trained in de-escalation and are being mobilized to maintain peace. We must protect everyone’s freedom of speech and hear all voices loud and clear,” one memo stated. “But we cannot do that if the safety of demonstrators and others in our community are in danger.”

Another set of talking points anticipated sharp questions over the destroyed 3rd Precinct police headquarters in Minneapolis before the Guard was on scene.

“Many of you are asking where the state was when the third precinct was in flames,” the memo prepared for Walz ahead of his press briefing said. “The truth is: We were not called by the city of Minneapolis to assist in that location.”

Text messages between the governor’s office and the Department of Public Safety struck a similar tone.

A Walz aide urged DPS Communications Director Bruce Gordon to stress that “we had resources out to help” in response to criticism that not enough was being done to address a volatile situation.

Gordon replied with what would be posted to the State Patrol’s Twitter account not long after: “About 200 Minnesota State Patrol troopers and DNR conservation officers are actively supporting efforts in Minneapolis and St. Paul tonight and working to keep people safe.” He asked if that was sufficient.

“We are getting questions about why the State Patrol or Guard didn’t stop the building from burning,” the Walz aide wrote back. “Can anything in your tweet help respond to that question?”

Gordon responded: “I don’t think so. … I believe that was an MPD decision,” referring to the Minneapolis Police Department. “This is part of the problem. MPD has no plan…especially to arrest anyone.”

There was considerable attention paid to constructing a real-time “tick tock” to capture the timing and logistical concerns being weighed. Deputy Walz Chief of Staff Kristin Beckmann urged a group of staff, some of whom were redacted from the released materials, to do what they could to make information public about how many Guard members were on the ground and where.

“Because this is a such an unusual time, I think we would all benefit from as much transparency as is safe for operations,” Beckmann wrote, saying Walz was “particularly interested in calming people’s fears about deploying the guard by being transparent about what they are doing.”