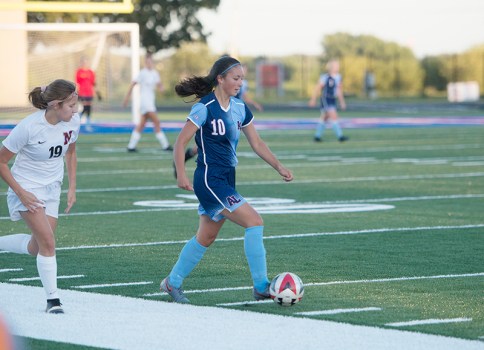 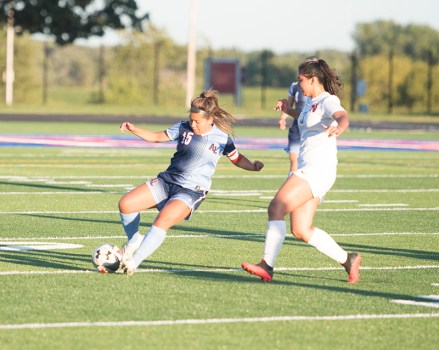 Albert Lea senior Jacy Rosas tries to keep possession of the ball Thursday night at home against Northfield. The Tigers lost the match 2-1 after taking a 1-0 lead into halftime. Tyler Julson/Albert Lea Tribune 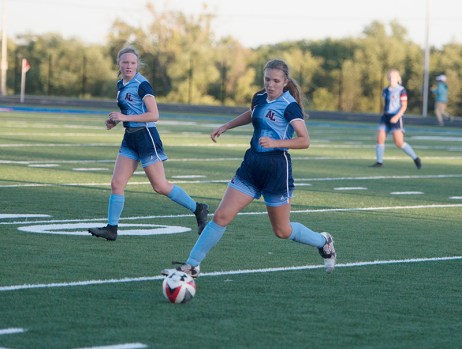 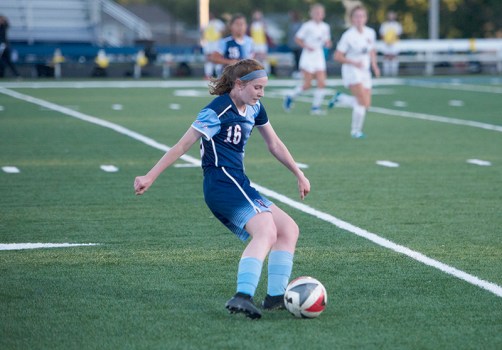 After suffering a 5-1 loss Tuesday night, the Tigers were still looking for their first win of the season.

After taking a 1-0 lead into the halftime break, the Tigers gave up two quick goals in the second half, eventually falling to the Raiders 2-1.

Just two minutes into the game, sophomore Kendall Kenis showed off her speed by breaking past the Raider’s defensive lines and finding a good look. However, the shot sailed just over the goal, keeping the score tied at 0-0.

About 10 minutes later, junior Abigail Chalmers took a deep curving shot from just inside the box, which again missed the goal.

At the 18-minute mark, Albert Lea was awarded a corner kick, which was taken by senior Jacy Rosas. Her kick took a nice trajectory toward the net, but Northfield’s goalie was there to make the save.

Two minutes later, Rosas took another corner kick, but the attempt was again caught by the goalie for the save.

With under 20 minutes to go in the first half, Kenis again got around a host of defenders and took another shot at the goal, but narrowly missed the mark that would have given the Tigers the lead.

Finally, with around 14 minutes left in the half, the Tigers notched their first goal, scored by sophomore Morgan Luhring coming right in front of the net.

Luhring came up big again with under five minutes left in the half, using a burst of speed to get around Northfield defenders, but the shot was saved by Northfield’s keeper.

Two minutes into the second half, the Raiders knotted the game at 1-1 with a goal that was put in a nearly perfect spot to get past senior keeper Lucy Sherman.

In a deja vu moment from the first half, Rosas had a corner kick curve right into the hands of the Northfield keeper six minutes into the half.

In the 10th minute of action in the second half, the Raiders scored their second goal of the half from nearly the same spot as their first and took their first lead of the game, 2-1.

With nearly 30 minutes left in the match, the Tigers would not give up just yet. There were multiple free kicks and corner kicks taken by the Tigers, but the Raiders’ keeper was able to stop them all.

The Tigers fall to 0-2 on the season and will play again Sept. 12 when they host the Wingers of Red Wing.