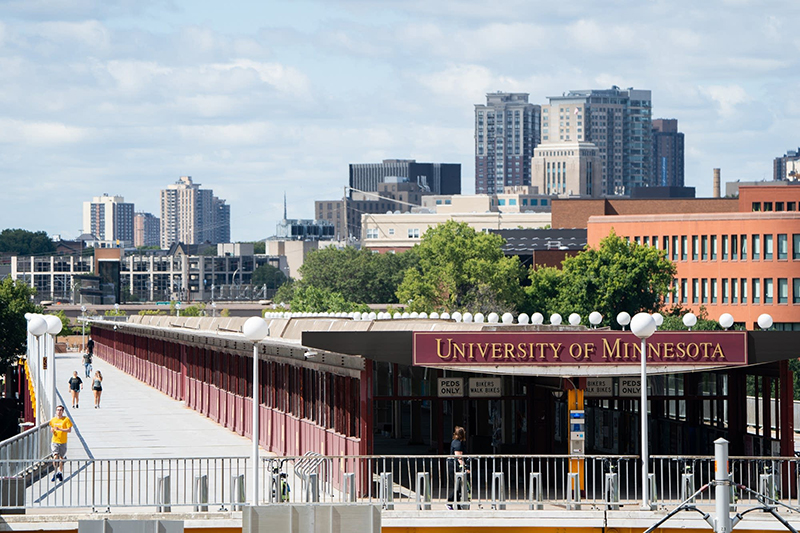 People cross the Washington Avenue bridge toward the University of Minnesota in Minneapolis on Aug. 3. Evan Frost/MPR News

The University of Minnesota will end men’s indoor and outdoor track and field, men’s gymnastics and men’s tennis as it slashes costs to ease losses from the COVID-19 pandemic and the Big Ten’s move to postpone football.

“Our athletic department is now facing a projected loss of revenue of approximately $75 million just this fiscal year,” Joan Gabel, the university president, said in a statement Thursday, noting that the impact will last for years.

“Almost all of our revenue streams have absorbed some sort of hit that we’re trying to navigate our way through,” Mark Coyle, the U’s athletic director, told reporters following the announcement.

“We’re doing everything we can to try to mitigate that lost revenue and manage our expenses to the best of our abilities,” he said, adding that the athletics department has been talking with campus administrators “about a loan that obviously athletics would have to be pay back as we move forward.”

The athletics department will also cut more personnel costs, including eliminating eight positions, although officials said no one earning less than $40,000 a year would be affected. The planned reductions are expected to generate $1.3 million this fiscal year, the U said, adding that it can no longer sustain 25 athletic programs.

The sports targeted will be eliminated at the end of their 2020-21 seasons. The U said it would continue to honor all existing scholarships among the students affected.