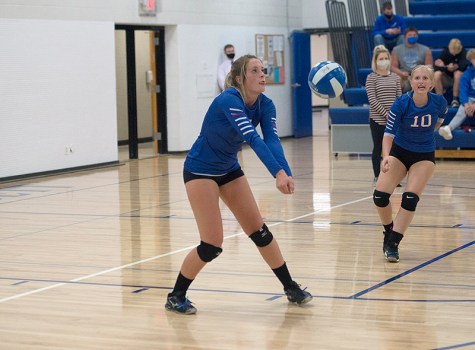 Senior Brylee Hoeppner bumps the ball from the back row Tuesday night against Rockford. Hoeppner had nine kills, two blocks, two digs and was 13/13 from the service line. Tyler Julson/Albert Lea Tribune 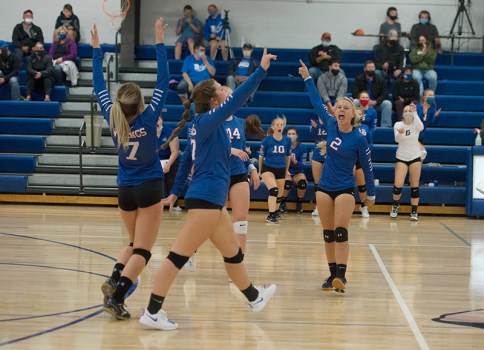 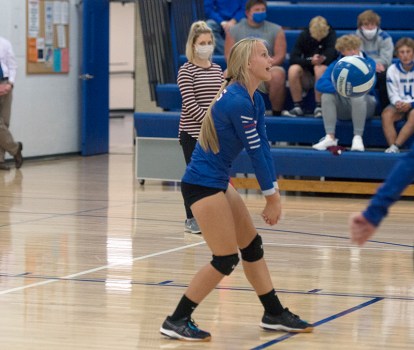 NORTHWOOD — The Northwood-Kensett volleyball team hosted a struggling Rockford team Tuesday night looking for its third win of the season.

Despite a close third set that came down to the very end, the Vikings had little trouble with the Warriors, winning in three straight sets 25-20, 25-11, 28-26.

The Vikings jumped out to a quick lead in the first set thanks to great serving from seniors Hallie Varner and Kayla Senne. Up 10-5, Senne forced the Warriors to take a timeout with a big block to give the Vikings an 11-5 lead.

Rockford gave up a handful of points thanks to mistakes and hitting errors, which allowed Northwood-Kensett to start pulling away.

With the Vikings up 20-12, the Warriors made a small comeback effort, but ultimately came up short when a kill from senior Brylee Hoeppner ended the first set, 25-20.

It was all Vikings in the second set; kills from Hoeppner and fellow senior Olivia Stilley had the Warriors’ defense reeling. Junior Emma Davidson was also a big factor at the service line with crushing serves. The Vikings won the second set 25-11.

The third set was a little closer than the Vikings would have liked. The Warriors jumped out to a quick 8-4 lead before Davidson, again, led a charge from the service line and tied the set 8-8.

The two teams battled back-and-forth for the remainder of the set. It seemed as though Northwood-Kensett was going to pull ahead for another easy win when they took a 20-16 lead. However, Rockford was not ready to give up and battled back to tie the set back up at 24-24.

The Warriors took a 25-24 lead, but Hoeppner took charge and gained the lead back for the Vikings as they pulled out a 28-26 victory.

Hoeppner led the team in kills with nine. Senne and Stilley each had three. As a team the Vikings had nine kills.

Senne and Stilley led the team at the net defensively with three kills each. Varner led the Vikings with 12 digs, the only Viking in double figures.

Hoeppner, Stilley and senior Shallon Batton were all 100% from the service line with a combined 21 serves.

The Vikings move to 3-2 on the season and 2-2 in the Top of Iowa Conference. They currently sit in fifth place of the conference standings.

The Vikings will be back in action Tuesday night when they hit the road to take on the Knights of Newman Catholic.