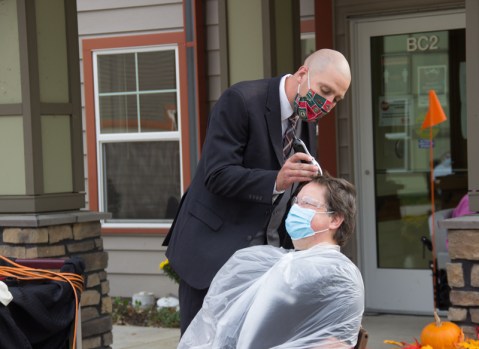 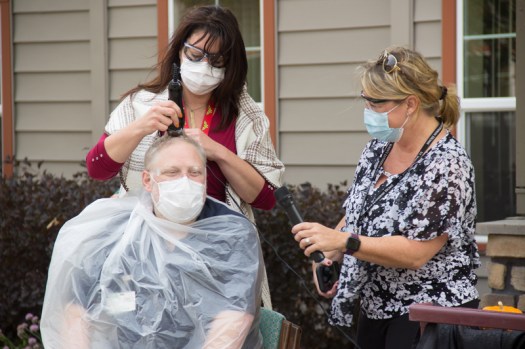 Chastity Fossum, director of nursing at St. John's Lutheran Community-The Woodlands, shaves off the hair of Paul Sullivan, a maintenance staff member, on Friday. Sullivan pledged to have his head shaved if residents raised over $500. - Sarah Stultz/Albert Lea Tribune 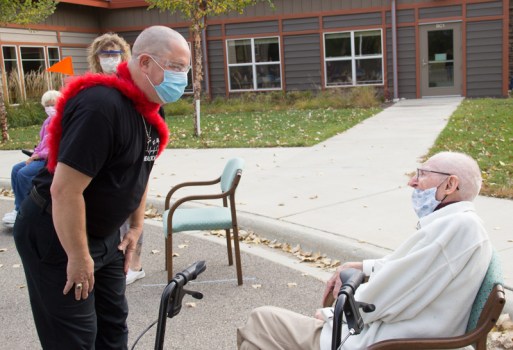 Residents at St. John’s Lutheran Community’s The Woodlands campus started out at the beginning of September with a goal to raise $100 for the Albert Lea Salvation Army.

After only a week and a half of fundraising, they passed that goal, and the organization’s chaplain, Don Malinksy, offered to shave his head if they reached $250.

Like with the first goal, they passed that target, and then Paul Sullivan, in the maintenance department, offered to shave his head if they raised $500.

With the help of a $300 donation from Josh Fossum, manager of Bayview/Freeborn Funeral Home who is married to Chastity Fossum, the director of nursing at The Woodlands, the residents raised a total of $618, and got the opportunity Friday to witness their two staff members follow through on their fundraising promises.

“They’re so excited over this whole thing,” said Amber Carberry, activities coordinator at The Woodlands.

Carberry said most of the funds the residents raised came from the bingo quarters they earned playing the game several times a week during the month of September. Some staff members at The Woodlands also donated, along with a few tenants at the facility’s Water’s Edge location.

She noted St. John’s only started having group activities again in July, and she was grateful they were able to have such a fun ceremony for the residents to enjoy.

Residents spaced out around one of the facility’s entrances looked on as St. John’s staff members and Fossum took turns shaving the two men’s hair.

Carberry said the residents chose to give their money to the local Salvation Army to support people in the community who may be out of work because of COVID-19.