Adeline Marie Anderson was born on June 17, 1932 to Myrtle (Moen) and Joseph Anderson, in Berlin township, Steele County, Minnesota. Adeline died Tuesday, October 6, 2020 at Benedictine Living Community in Owatonna MN. She was 88 years of age. She attended school in Ellendale and on August 30, 1947 married Donald Merton Reese in Austin, MN.

A Memorial Service will be held on Tuesday, October 13, 2020 at 11:00 am at First Lutheran Church in Ellendale, MN. Visitation will be 1-hour prior at the church. Interment will be at First Lutheran Cemetery immediately after the service. The family requests people attending be in compliance with CDC guidelines. Bonnerup Funeral Service is assisting the family. www.BonnerupFuneralService.com

Memorials may be sent to the New Richland Public Library or other libraries of the donor’s choice. 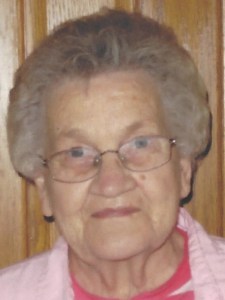 Adeline was baptized, confirmed and a lifelong member of First Lutheran Church in Ellendale.

Adeline was actively involved in the farming operation with her husband in Berlin township near Ellendale and exclusively managed and cared for the dairy herd. Their home was always open to everyone. Many nieces, nephews and other family members enjoyed many wonderful times at the Reese farm. Donald and Adeline moved to New Richland in the early 1990’s.

Adeline was an avid reader, seamstress, generous, kind, a trusted friend, and a Twins fan. She loved listening to The Blue Banners, attending the county fairs, and the Minnesota State Fair each year. She was clearly a woman ahead of her time. Her greatest joy was visits from her children, grandchildren and great-grandchildren.

Adeline was preceded in death by her husband, parents, sisters Myrna Anderson and Karla Johnson.