Bulldogs headed to regional final for first time since 2017 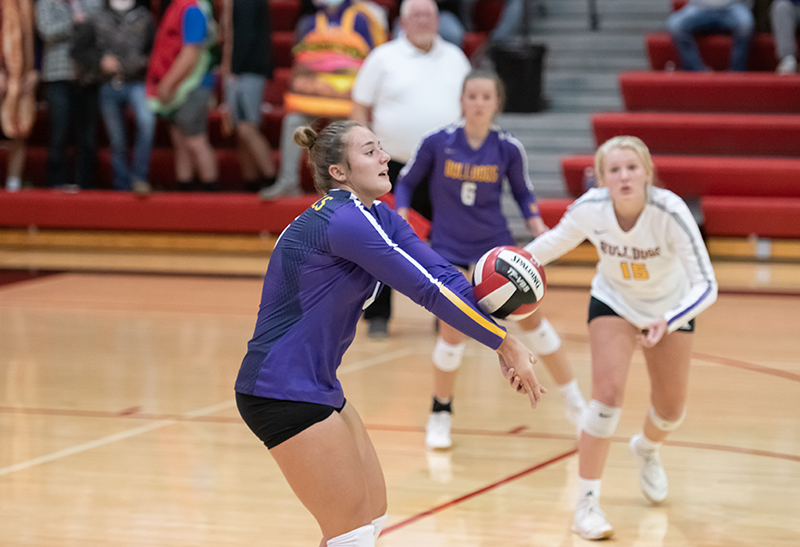 Lake Mills senior Kylie Greenfield bumps the ball to keep it in play Monday night in the regional semifinals against Aplington-Parkersburg. Greenfield had 10 kills, eight digs and one block in the 3-0 victory. - Lory Groe/For the Albert Lea Tribune

PARKERSBURG, Iowa  — The unranked Lake Mills volleyball team went into its Class 2A regional semifinal match with the tall task of taking on No. 15 Aplington-Parkersburg.

Not only did the Bulldogs pull off the win, they dominated the Falcons to win in straight sets  3-0.

Head coach Jim Boehmer said the night got started out better than he could have dreamed. Lake Mills jumped out to a 7-1 lead in the first set and widened their lead for the majority of the set. At one point Lake Mills owned a 24-13 lead and needed just one point to put the set away. Aplington-Parkersburg stormed back, however, cutting the lead to 24-20 before Lake Mills was able to close it out.

The second set seemed to go the opposite way through the opening portion. The Falcons got out to an early 7-2 lead and continued to extend. It looked as though the Falcons were going to even the series with a 22-15 lead. Boehmer then called a timeout.

“I called a second time out and told the girls not to worry about winning or losing the set,” Boehmer said. “Just play to get the momentum back.  Fight for points and cut into the lead so we have momentum for set three.”

Lake Mills gained a large share of the momentum after the second-set win and used that boost to dismantle Aplington-Parkersburg in the third set. Boehmer said the third set was one of the team’s best sets all year. Lake Mills went on multiple runs to dominate the set from start to finish, winning 25-7.

Boehmer said it was a well-deserved win for the Bulldogs as the Falcons were a deservedly ranked team.

“We were so balanced offensively and we moved the ball around so well,” Boehmer said.   “That’s credit to a solid defense and to Leah Moen for moving the ball around.  Defensively we all did a great job.  Erica Jordon came in and was excellent on defense and gave us a spark.  (It) was a total team effort.  We got to the gym early and just talked for a bit about everyone on the roster finding a way to score points for us.  I was really pleased with that effort tonight.”

The Bulldogs were led in kills by junior Kit Byers with 11. Senior Kylie Greenfield was  right behind with 10. Sophomore Ellie Hanna had seven. Juniors Leah Moen and Brooke Bergo, and sophomore Ella Stene combined for nine kills.

As a team, the Bulldogs were 72-77 from the service line with 10 aces. Greenfield recorded three of those aces. Bergo Jordan and junior Kenna Vanek each had two.

Jordan also led with 12 assists and senior MaKenna Hanson had 11.

“Tonight we turned a corner as a program,” Boehmer said.  “This year’s senior class has helped us take the next step.  We know we have Dike next and that is an amazing mountain to climb, but we don’t care.  We just want to be who we want to be.  Give it your all, do your job and compete every point.  That’s how you measure success.”

The Bulldogs advance to their first regional championship since the 2017 season. The championship game and a trip to the state tournament will be on the line Wednesday night against the No. 3 ranked Wolverines of Dike-New Hartford.