Bulldogs’ season comes to an end 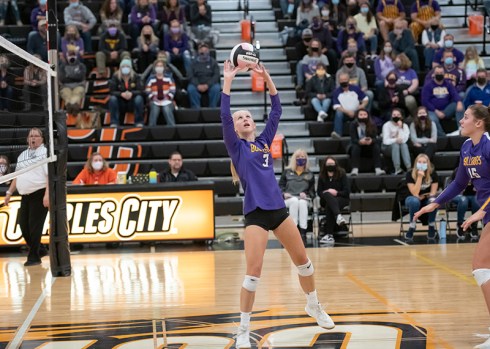 Junior Leah Moen sets up one of her teammates with one of her 14 assists Wednesday night in the regional final against Dike-New Hartford. - Lory Groe/For the Albert Lea Tribune 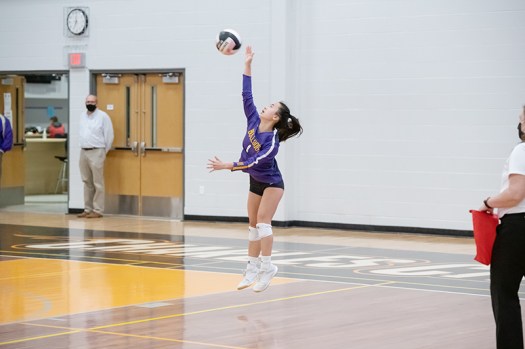 Junior Erica Jordan serves the ball at the regional championship in Charles City Wednseday night. Joradn was 8-10 from the service line in the loss to Dike-New Hartford. - Lory Groe/For the Albert Lea Tribune 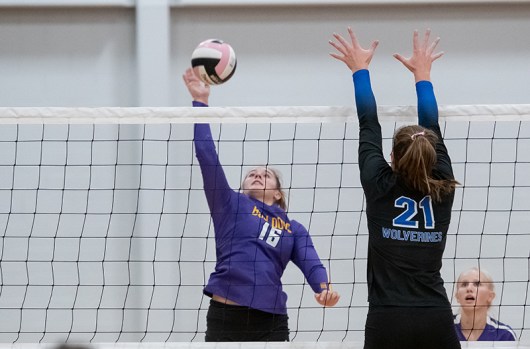 Senior Kylie Greenfield gets up for one of her seven kills Wednesday night. - Lory Groe/For the Albert Lea Tribune

CHARLES CITY, Iowa — The Lake Mills volleyball team traveled to Charles City Wednesday night to take on Dike-New Hartford in its first appearance in the regional championship since 2017.

Despite their best efforts, the Bulldogs were unable to match the play of the No. 3-ranked Wolverines, falling in straight sets 3-0.

According to head coach Jim Boehmer, the Bulldogs played well through the opening portion of the first set before the Wolverines pulled away. Boehmer said it was a goal of the team’s to trade points with the Wolverines as much as they could, and they did that until midway through the set, when the Wolverines went on a long run. The run won it for the Wolverines 25-14.

Lake Mills came back with a fury in set two and Boehmer said the team did a better job of handling the first ball and finding the hitters. However, the power of the Dike-New Hartford front line was still too much, as Lake Mills fell behind 2-0 after the 25-21 set loss.

Boehmer said the second set took a lot of energy and emotion, which caused their third set to never really get off the ground. The Wolverines quickly put the set away 25-10 and won the match 3-0.

Senior Kylie Greenfield led the team with seven kills and junior Brooke Bergo was close behind with six. Junior Kit Byers had three and sophomore Ella Stene had one. Junior Leah Moen had 14 assists and the Bulldogs were 44-47 from the service line, including one ace from Moen and junior Erica Jordan.

Boehmer said if the season had to come to an end, losing to a top team in the state wasn’t a bad way to go.

The Bulldogs end their season with a 25-10 record and graduate four seniors from this year’s team. They return nine letter winners with a lot of depth and height, something Boehmer said the team isn’t normally known for.