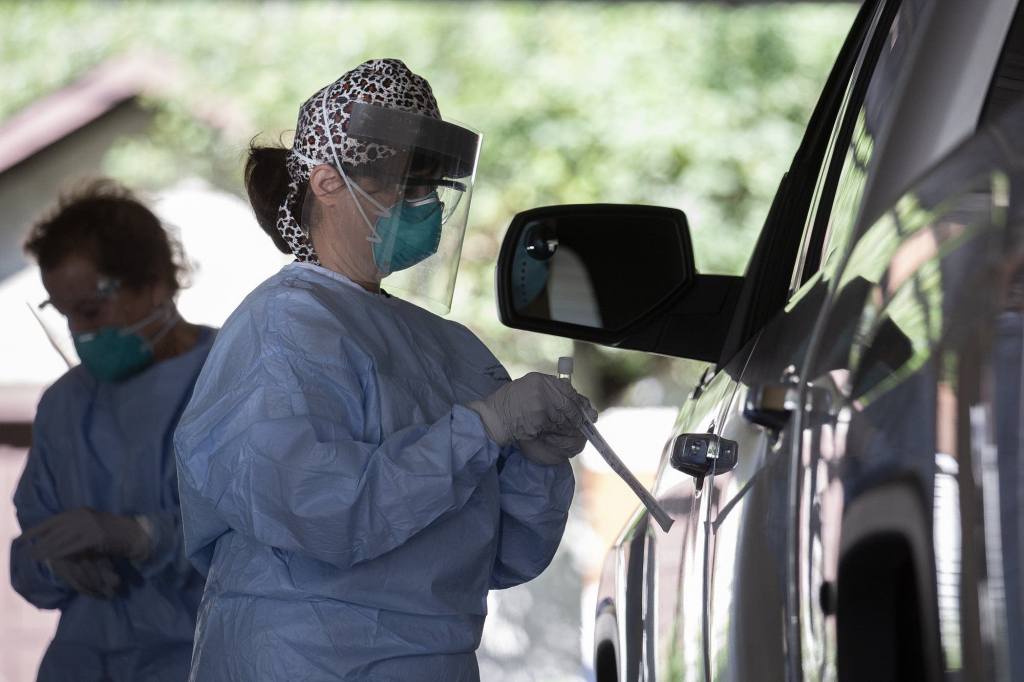 Newly confirmed COVID-19 cases in Minnesota remained above 1,000 for a fourth straight day in Sunday’s update from the state health department, with another 10 deaths reported in Minnesota.

The latest report shows 1,450 new cases in the state — down from Saturday’s record daily increase of 1,537 cases. The number of test results also decreased, with the positivity rate staying near 5 percent.

New COVID-19 hospitalizations in Minnesota continued their upward trend to levels not seen in several months.

Active cases in Minnesota remain at a record high — 9,956 as of Sunday’s update. The latest update from the state health department also showed that more than 100,000 people in Minnesota who were diagnosed with COVID-19 have now reached the point where they no longer need to be isolated.

Despite the high numbers of new cases in Minnesota, more significant spikes are happening in neighboring states; Wisconsin reported more than 2,700 new COVID-19 cases on Saturday along with 18 deaths.

Minnesota health officials are worried now about spillover effects from that rampant spread in neighboring states. While Minnesota is doing better than its neighbors right now, officials on Friday emphasized how fleeting that can be and how quickly things can change.

“We’re grateful for every day we’re not in an absolutely hideous place,” said Kris Ehresmann, the state’s infectious disease director. Minnesota’s current situation “isn’t great,” she added. “We haven’t fallen off the cliff” but “we could change rapidly,” she noted. “We could very well end up like our neighbors if we’re not careful.”

‘A lot of disease out there’

Sunday’s numbers follow a stretch of more than a week when average new daily case counts topped 1,000. The trend line of active COVID-19 cases in Minnesota remains at a record high in the pandemic.

The outbreak now includes at least nine cases associated President Donald Trump’s Sept. 18 rally in Bemidji. Health officials confirmed that count on Friday and said two of those nine have been hospitalized, with one needing intensive care.

The surge came and the hospitalizations appear to be following. Daily counts of new hospital admissions still remain below their late May peak, but they’re climbing back toward it.

On Thursday, officials reported the second-highest number of new COVID-19 hospital admissions in a single day in the pandemic, suggesting that some of the recent surge in newly confirmed cases is surfacing now in hospital beds.

Greater levels of testing have meant more cases identified, but the percent-positive rates have been hovering for days around 5 percent, the threshold of concern for officials as they work to stem the spread of the virus.

“Even though we’re testing a lot more people, a consistent high rate of positivity means there’s a lot of disease out there,” Ehresmann added.

Despite the case jumps, state officials have changed their pandemic guidance and are increasing the allowable table/party size in Minnesota restaurants and bars as they try to balance economic needs and public health.

Updated rules permit as many as 10 people seated together in restaurants and event spaces, up from four or six if they were members of a single household.

Rise in cases among age 70-plus Minnesotans

New cases are up dramatically since Sept. 1 in all age groups 30 and older, but the most recent data show a concerning rise in the number of new cases among Minnesotans age 70 and older. It’s not clear why.

People in their 20s still make up the age bracket with the state’s largest number of confirmed cases — more than 25,000 since the pandemic began, including more than 14,700 among people ages 20-24.

While less likely to feel the worst effects of the disease and end up hospitalized, experts worry youth and young adults will spread it to grandparents and other vulnerable populations and that spread could hamper attempts to reopen campuses completely to in-person teaching.

The number of high school-age children confirmed with the disease has also grown, with more than 10,400 total cases among children ages 15 to 19 since the pandemic began.