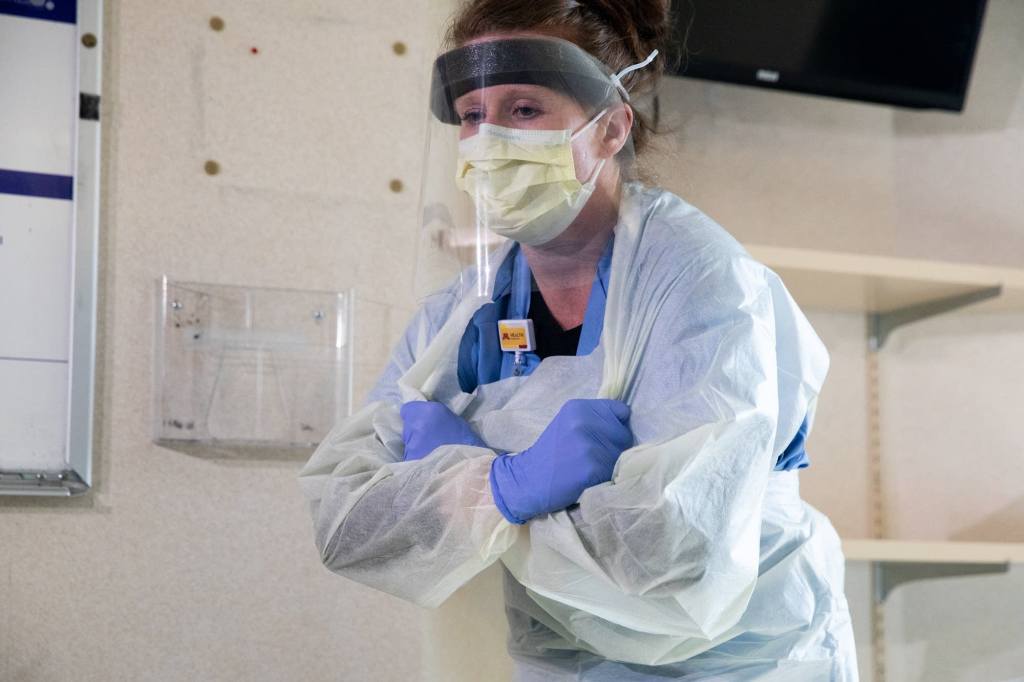 A recent change to the COVID-19 data reported by the Minnesota Department of Health is drawing fire from Republican lawmakers.

“In order to best understand the severity of disease, we want to look at the proportion of cases admitted to the hospital,” said Kris Ehresmann, the state’s infectious disease director, in a Sept. 23 briefing. “At this point in the pandemic, it makes the most sense to focus on this measure.”

Now 26 Republican members of the state Senate have sent a letter to Health Commissioner Jan Malcolm asking her to resume sharing data on current hospitalization rates.

The old stats on hospital occupancy captured several different aspects of COVID-19. When occupancy numbers went down, that could reflect a combination of fewer new admissions, more patients being discharged, and more patients dying. The new data only captures changes in admissions, and not how long patients are hospitalized.

In lieu of their daily hospitalization updates, health officials said they would include more detail on hospitalizations in their weekly updates, published every Thursday. Those data weren’t included in last week’s report as initially promised.

“We weren’t able to get it included [last] week as we had hoped, but we are still actively working on it,” said Health Department spokesperson Andrea Ahneman. “I know there’s great interest in the data.”

Here’s how the hospitalizations data used to be reported daily:

Here’s how the Health Department reports it now:

The newest numbers come following six consecutive days when average new cases topped 1,000. The trend line of active COVID-19 cases in Minnesota remains at a record high in the pandemic.

The combination of high confirmed cases with low testing made for a positive test rate of more than 7 percent in Tuesday’s data.

While a single data point isn’t necessarily cause for worry, officials watch that positive test percentage closely and get concerned by trends that push the results above 5 percent.

People in their 20s make up the age bracket with the state’s largest number of confirmed cases — more than 24,400 since the pandemic began, including more than 14,100 among people ages 20-24.

While less likely to feel the worst effects of the disease and end up hospitalized, experts worry youth and young adults will spread it to grandparents and other vulnerable populations and that spread could hamper attempts to reopen campuses completely to in-person teaching.

The number of high school-age children confirmed with the disease has also grown, with nearly 10,000 total cases among children ages 15 to 19 since the pandemic began.

With many schools in Minnesota attempting to teach in-person, officials say they are especially concerned about the rising numbers of teens becoming infected and how that could affect decisions to keep school buildings open.

The Health Department on Friday identified seven school buildings in Minnesota with five or more confirmed cases of COVID-19 in students or staff who were in those buildings while infectious during a two-week reporting period.

The fact that only seven schools have five or more such cases is “very positive,” Ehresmann, the state’s infectious disease director, told reporters Friday. “We’re not seeing large outbreaks at all associated with a school setting.”

Ehresmann said that the agency had reports of 2,805 COVID-19 cases in the pandemic associated with colleges and universities with nine people needing to be in the hospital and three needing intensive care.

The numbers for colleges or K-12 schools don’t necessarily mean that the disease spread happened in school buildings, only that people were infectious while in a school building, she added.

Regionally, northern, southern and central Minnesota have driven much of the recent increase in new cases while Hennepin and Ramsey counties show some of the slowest case growth in the state.

Northern Minnesota, once by far the region least affected by the disease, has over the last week averaged the most cases per capita.

Collectively, rural areas of Minnesota continue to report the most new COVID-19 cases.

In southwestern Minnesota, at least 75 cases have been traced to a late-August wedding in Lyon County that officials have previously described as the state’s largest single social spreader event.

Thirty-nine cases have now been traced to a Martin County funeral, with one person hospitalized.

Southeastern Minnesota, specifically Winona, has been another hot spot as students return to college at Winona State and other schools. The problem has been compounded by similar outbreaks nearby across the Mississippi River at the University of Wisconsin-La Crosse.