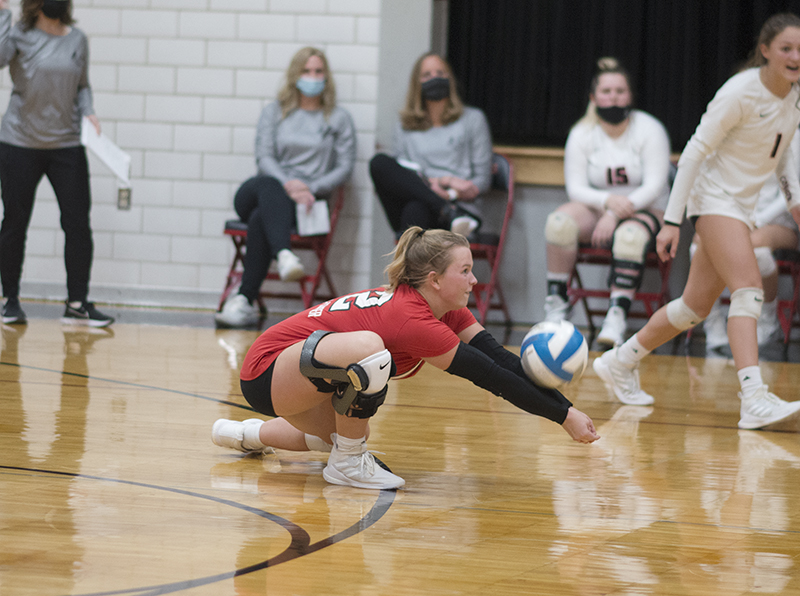 Junior Mallory Ignszewski gets low to record the dig Tuesday night against Martin County West. The Knights easily won the match 3-0 and move to a perfect 5-0 on the season. - Tyler Julson/Albert Lea Tribune

ALDEN — Looking to continue its reign of dominance, the Alden-Conger volleyball team hosted Martin County West Tuesday night in a Section 2A and Valley Conference showdown.

The Mavericks proved to be no match for the Knights, however, as Alden-Conger went on to win the match in straight sets 3-0.

The Knights cruised in their first set, getting out to a 10-6 lead and extending it even further to 19-11, forcing the Mavericks to call a timeout. The attempt to stop the momentum of the Knights was unsuccessful, as they kept their foot on the gas and came away with a 25-14 first-set win. 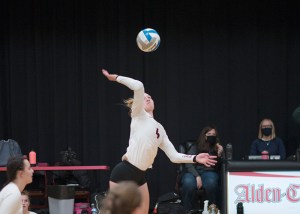 Senior Abbie Theusch skies for a kill shot Tuesday at home. Theusch led the Knights with 19 kills in the 3-0 win over the Mavericks. – Tyler Julson/Albert Lea Tribune

Martin County West was able to hang with Alden-Conger a little better in the second set, even taking the lead in the early stages. However, the fire power of the Knights offense was just too much to overcome. Theusch upped her kill total to 14, while  senior Grace Erickson popped on the scene with five kills.

Alden-Conger quickly took the lead back and climbed to a 25-16 win.

The third and final set turned out to be the most competitive. The Mavericks kept themselves within two points of the Knights throughout most of the set. After taking a 17-16 lead, the Mavericks stumbled slightly and allowed the Knight to jump back in front 18-17. Trying to stop the momentum, the Mavericks took a timeout. The break, again, seemed to help the Knights more than hurt them as they went on a 7-3 run to win the set 25-20.

Theusch led the Knights with  an astounding 19 kills. Senior Kylie Korman was the other Knight to reach double figures with 10. Erickson had six, while  Stein and senior Shay Sailor each had four.

The Knights move to 5-0 this season and have still only dropped one set on the year.

They will be back on the court Thursday when they travel to Madelia to take on the 0-2 Blackhawks.