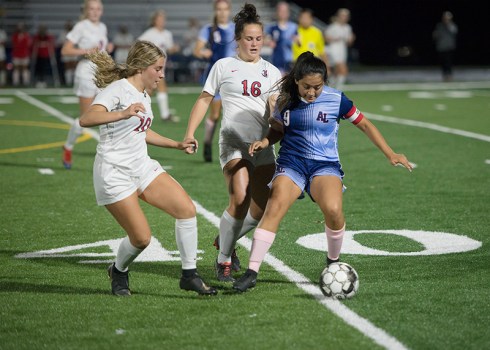 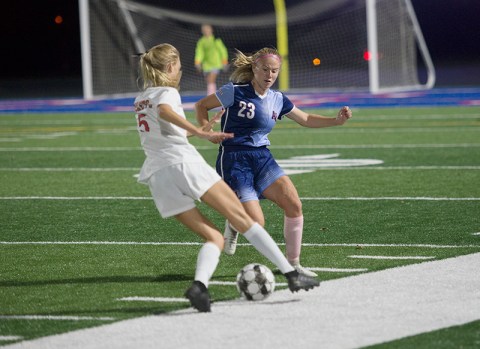 As the end of the regular season draws nearer, the Albert Lea girls’ soccer team hosted Rochester John Marshall in search of its third win of the season.

After a scoreless first half filled with shot opportunities, the Tigers gave up one goal in the second half and were unable to score themselves, falling 1-0.

The opening minutes of the match were relatively uneventful with neither team able to advance the ball deep into the opponents territory.

With ten minutes elapsed in the half, the Rockets were able to advance the ball far enough into the box and drew a penalty on the Tigers, allowing for a penalty kick.

Senior Mallory Luhring, who started in the goal for the Tigers, made a nice save on the penalty kick, however, to keep the game knotted at 0-0.

A few minutes later, the Rockets were back and Luhring, again, made a spectacular save after which another shot from the Rockets rang off the crossbar.

Junior Abigail Chalmers had two shots in the first half that narrowly missed the goal, the first sailed just left and the the second a header that sailed over the goal.

Luhring picked up another save with 13 minutes left in the half after a play from the corner, which resulted in a congested box. Luhring was able to make the save regardless.

Albert Lea had two more corner kicks before the end of the half. Both taken by senior Jacy Rosas, the first barley missed after being blocked by the John Marshall goalie, the second was kicked just as time expired on the half.

The match went to the halftime break in a 0-0 tie.

The second half started much the same as the first. That was until the 59th minute of the match when the Rockets scored the go-ahead goal.

The Tigers fall to 2-5-1 on the season and will play again Thursday on the road against the Winhawks of Winona.