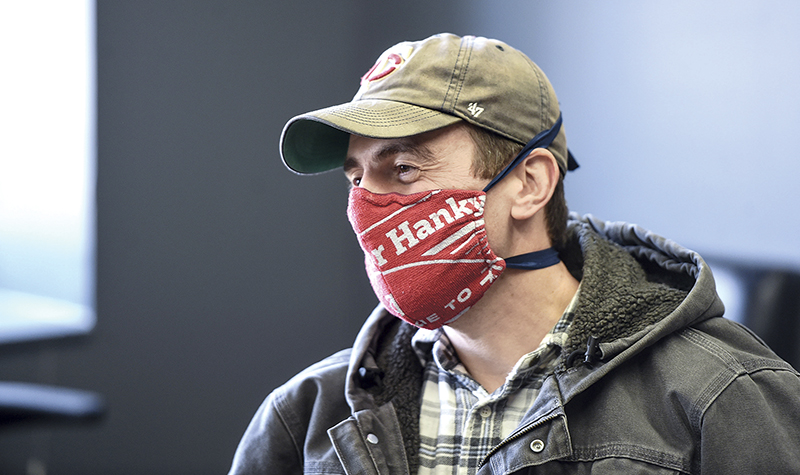 AUSTIN — DFL Minnesota 1st Congressional District candidate Dan Feehan stopped in Austin on Friday to conduct a farm tour in the middle of harvest. Feehan said farm visits are something he has been trying to do consistently throughout his campaign.

“Agriculture is vital here,” he told the Tribune. “We talk about a lot of things, from how the trade war is going to how the harvest has been impacted, how biofuels, particularly ethanol, have been affected, and how difficult it is to be a farmer and have health care these days.”

When it comes to agriculture, Feehan said he wants to be an independent voice for the region.

“Agriculture shouldn’t be a red or blue issue,” he said. “You should be able to represent the region, and that’s not being done now. The Democrats had a budget bill a couple of weeks ago that I called out because it didn’t have aid to farmers. You have to be able to do that with your own party.

“I’ve talked to farmers who are going bankrupt and are so frustrated with a trade war that’s lasted three harvests. They ask where they’re going to be able to sell their crops and at what point is there going to be leadership. There are small business owners that require and should expect consistency in leadership out of Washington and they haven’t gotten it.”

Throughout his campaign, Feehan has heard a resounding message on COVID-19.

“End this pandemic!” he said. “That calls for a national strategy and we have never had that. We’re nine months into it and we still have the repercussions of the federal government, the administration and a representative like Jim Hagedorn flat out quitting on us and not having the testing and the PPE that everyone needs.

“You look around and you’ll see our economy is stunted,” he added. “Life is stunted. Our children are not thriving right now, and there is nowhere else to look but to a Washington that failed to lead on this and failed to have a national strategy.”

Feehan noted health care issues have become even more urgent in the middle of the pandemic.

“There are so many Minnesotans that are underinsured or uninsured compared to nine months ago,” he said. “They don’t have the jobs they did nine months ago and are trying to figure out where affordable health care is going to come from. Will they see Jim Hagedorn in part of the lawsuit to take away protections for pre-existing conditions? They are deeply worried.”

Feehan said that people are also concerned about affordable prescriptions and criticized Rep. Jim Hagedorn (R-MN1) for opposing a bill that would allow Medicare to negotiate directly with drug companies, a measure that Feehan supports. He said he has also heard concerns about rural health care.

“We’re seeing hospital and clinic closures throughout rural areas,” he said. “In my view, the best way to move forward on that is to have more people insured so they seek and use health care in the first case, and if they are on programs like Medicare and Medicaid, the reimbursement rates are high enough for the hospitals to be solvent on the business side of things.”

Feehan was also critical of Hagedorn for claiming that he was paid $500,000 by organizations tied to Democratic operatives during the past two years to run for Congress rather than doing work for those organizations.

“(Hagedorn and I) just finished our final debate and he was more desperate than ever to lie and present a case that multiple organizations in southern Minnesota have debunked and found there is no credibility to,” he said. “I’m grateful to have provided for my family and just as importantly, I’m proud to have helped our understanding of what two decades of war and the cost of that have been on our country, of helping veterans and teachers find new ways to serve.”

Feehan stated that he believed Hagedorn was “corrupt,” citing a recent bulk mail scandal, where the congressman is alleged to have violated House ethics rules by paying close to $450,000 to companies with ties to his staffers to send out mail to constituents.

“When you’re corrupt, you try to portray the world as liars so that everything muddies up and people stop focusing on you,” he said. “I won’t stop focusing on him. Nearly half a million of our taxpayer dollars is unaccounted for. With the people I talk to who try to make things work in southern Minnesota, think about what a half million dollars can do for them.

“(Hagedorn) has made clear he is all about running for office and is about taking care of himself and those around him. That’s what corruption looks like.”

Feehan said he aims to build relationships with community leaders if elected.

“I am making a case to everyone that I am hoping to earn your vote,” he said. “If I don’t, that’s OK, because I’m going to work just as hard for you as if you did. When I get to Washington, I want to be able to count on you for the things that are in front of us, to know how it’s going to impact you and your community.

“I think people are looking for leadership and a common sense approach,” he added. “We have a representative that sees you as red or blue. That’s how he sees the world and I don’t think that’s how the world is.”