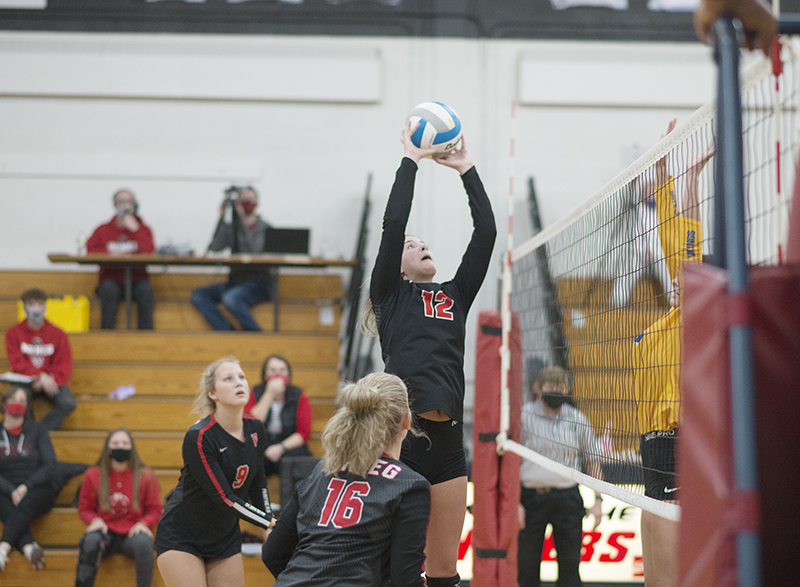 NRHEG sophomore Sarah George hits the ball over the net Tuesday in the matchup against Hayfield. The Panthers lost the match 3-0 despite playing the Vikings closely through two sets. - Tyler Julson/Albert Lea Tribune

NEW RICHLAND — The NRHEG volleyball team came into its game against Hayfield Tuesday night looking to get on the winning path and record its first win of the season.

Despite playing two close sets with the Vikings, the Panthers were unable to shake their early season struggles, falling to the Vikings 3-0.

Early on in set one, it seemed as though the Panthers were going to pull away from the Vikings after jumping out to a 12-6 lead, forcing the Vikings to call a timeout. After the break, however, the Vikings slowly inched their way back into the set and eventually tied set at 19-19. NRHEG called a timeout to try and slow down Hayfield, but the momentum it had already gained was too much, as Hayfield went on to win the set 25-22.

The Panthers still had hope only down1-0 and having played extremely close with the Vikings through the first set. 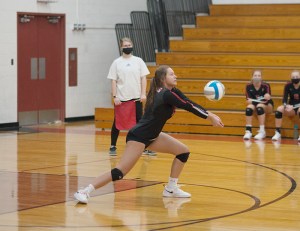 The second set started nearly the exact opposite as the first. The Vikings got out to an early 10-4 lead and slowly but surely, the Panthers started making their comeback. Unlike the first set, however, the Panthers were never able to come back and take the lead for themselves. The score ended even closer than the first set, but the Vikings still came out on top 26-24.

The third set was dominated by the Vikings. The Panthers kept it close, trailing by two points at the 7-5 mark. But that’s when the Vikings sprang ahead with an 8-1 run to take a 15-6 lead. The Panthers closed the gap to five points, but the damage was already done as they Vikings won the set 25-13.

“We were moving better across the net getting some big touches on their blocks and we were more aggressive at the net as well,” said head coach Onika Peterson. “We are continuing to get better, but we need to cut down on our errors like missed serves and keeping the ball playable with our hits.”

The Panthers fall to 0-4 on the season and will be back in action Thursday when they travel to Waterville to take on the 3-0 Buccaneers of Waterville-Elysian-Morristown.