NRHEG loses for the first time this season 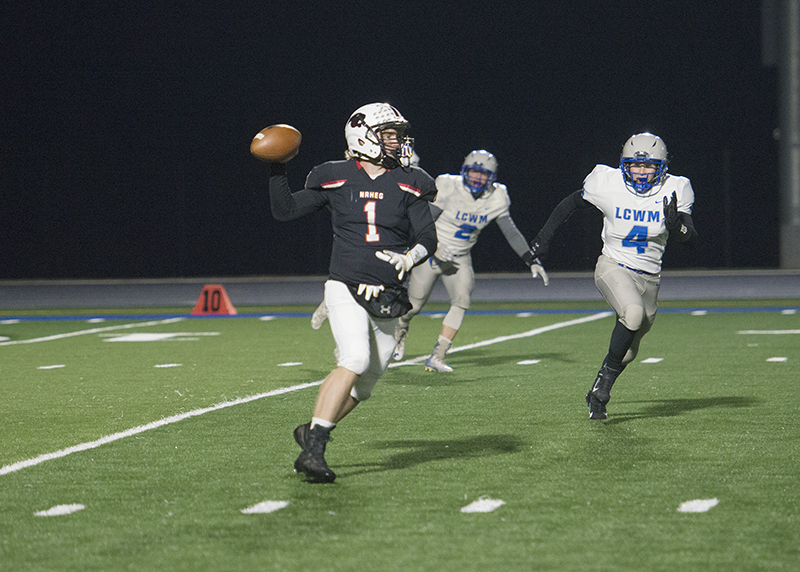 In a game that was moved to Jim Gustafson Field in Albert Lea because of rough field conditions, the NRHEG football team hosted Lake Crystal-Wellcome Memorial Friday night looking to stay unbeaten on the season.

The Panthers struggled to make plays on the offensive side of the ball and the defense fell into too much of a hole to work out of, and the Knights came out with a 27-12 victory.

The Panthers started the game by receiving the opening kick. After picking up a first down, the Panthers found themselves at midfield. In four-down territory, the Panthers went for it on fourth down, but had the pass batted down by a Knight defender.

The teams traded back-to-back three and out possessions, which resulted in the Knights getting favorable field position on a short punt. The Knights capitalized on the opportunity and put the ball in the endzone a few plays later on a three-yard run. A successful PAT put the Knights on top 6-0.

Another short offensive drive by the Panthers, the first quarter ended with the Knights on top 7-0.

NRHEG was in punting formation early in the second quarter, when a bad snap again gave the ball to Lake Crystal-Wellcome Memorial in prime field position. For the second time in as many attempts, the Knights used the position to their advantage and ran in another three-yard score a few plays later. A bad snap resulted in a missed PAT.

The Panthers used two big plays to make their way down the field on the next possession making their way down to the six-yard line. Senior Kordell Schlaak connected with senior Evan Reyna for the six-yard score two plays later. A failed two-point conversion made the score 13-6 in favor of the Knights.

After a few scoreless possessions, the Panthers were in punt formation when a bad snap went sailing over the punter’s head. With just over a minute left in the half, the Knights once again found themselves in scoring position.

Just before the end of the half, the Knights punched in another short run and capped it off with a two-point conversion to send the game to the half leading 21-6.

The third quarter remained uneventful until with under a minute to play, Schlaak connected with junior Porter Peterson on a 36-yard pass and run to the endzone. A failed two-point conversion kept the Panthers trailing by two possessions, 21-12 as the quarter came to an end.

What hope the Panthers had of completing the comeback took a big hit on the Knight’s next drive. The Knights held the ball for over seven minutes of game time and capped it off with a two-yard score to go up 27-12 with just over five minutes remaining in the game.

An interception on the next drive all but ended the game for the Panthers. The Knights took the ball and ran the rest of the clock out, handing the Panthers their first loss of the season.

The Panthers fall to 2-1 on the season and will play again Saturday when they take on Maple River on the road.