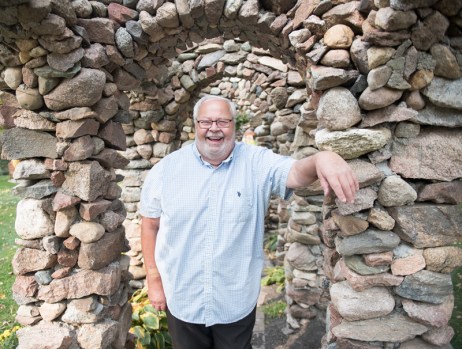 Eugene Stenzel has been building creations out of stone for 70 years. - Colleen Harrison/Albert Lea Tribune 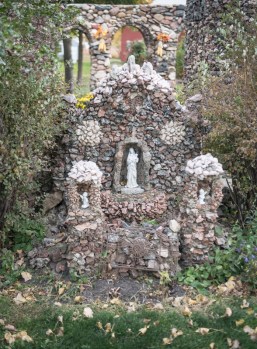 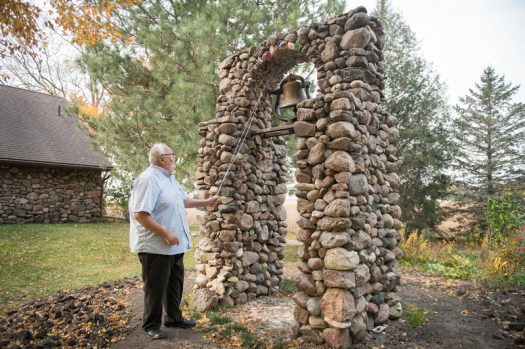 Eugene Stenzel rings a bell in one of the bell towers he constructed out of stone. - Colleen Harrison/Albert Lea Tribune 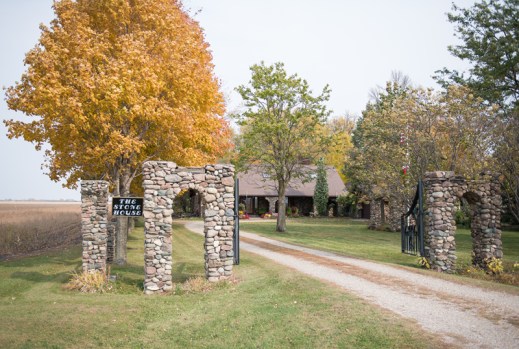 Stenzel lives north of Wells, and normally offers tours of his work, but has put those on hold due to the pandemic. - Colleen Harrison/Albert Lea Tribune 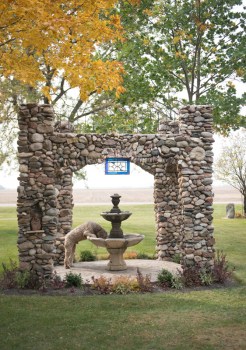 Stenzel lives next door to his niece and nephew, and their dog, Tucker, likes to visit his fountain. - Colleen Harrison/Albert Lea Tribune 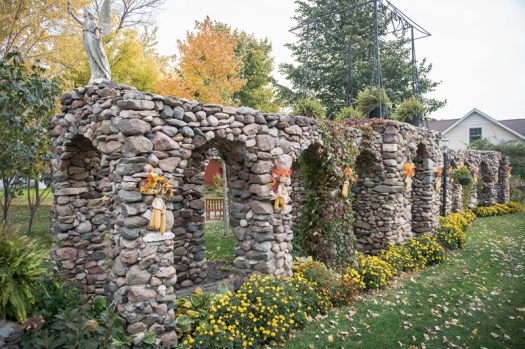 Stenzel built a series of archways out of stone between his property and his niece's and nephew's. - Colleen Harrison/Albert Lea Tribune 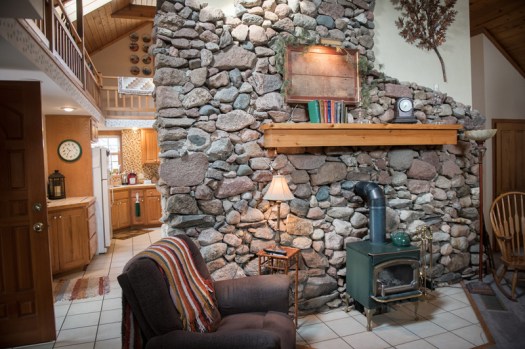 Stenzel did all the stonework on his house himself, first starting with a load-bearing wall that is now in the center of the house, dividing his kitchen from his living room. - Colleen Harrison/Albert Lea Tribune 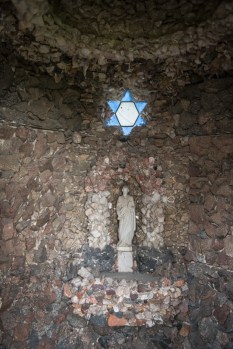 Elements of Stenzel's faith have been worked into several of the stone pieces around the property, from Jesus Christ to St. Francis. - Colleen Harrison/Albert Lea Tribune 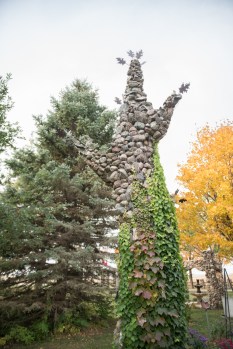 Stenzel even built a tree out of stone. - Colleen Harrison/Albert Lea Tribune 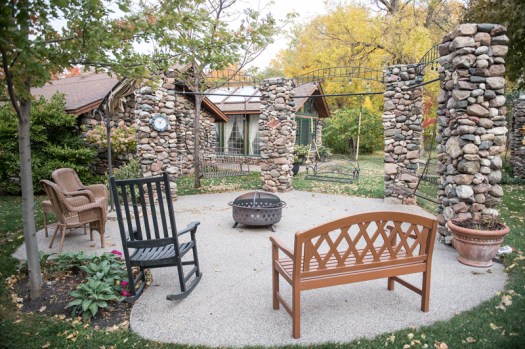 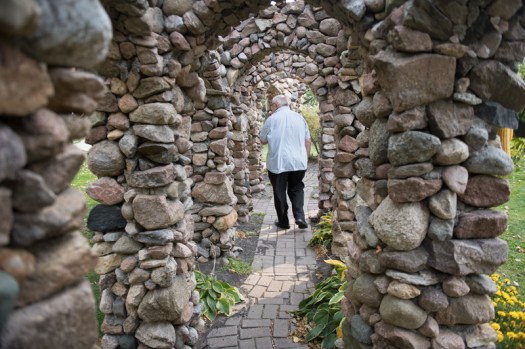 Stenzel walks through a series of arches leading from his property. - Colleen Harrison/Albert Lea Tribune 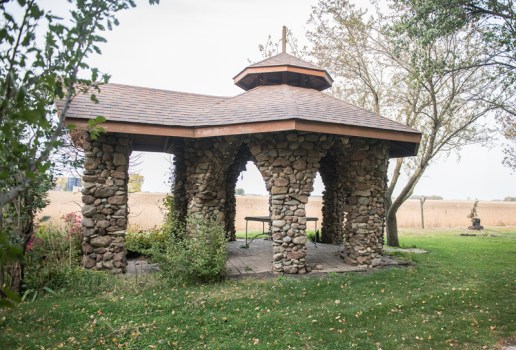 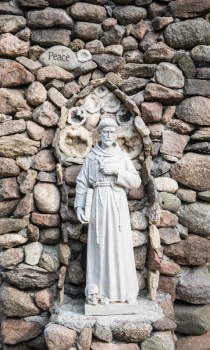 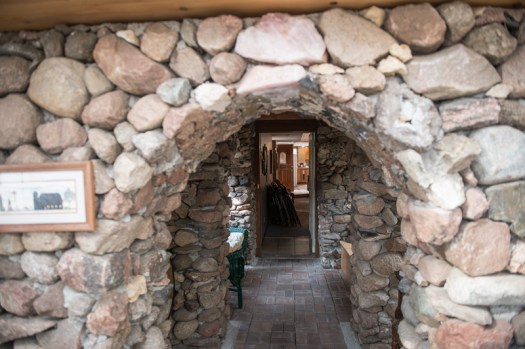 A series of archways lead from Stenzel's house to the sunroom he later added on. - Colleen Harrison/Albert Lea Tribune 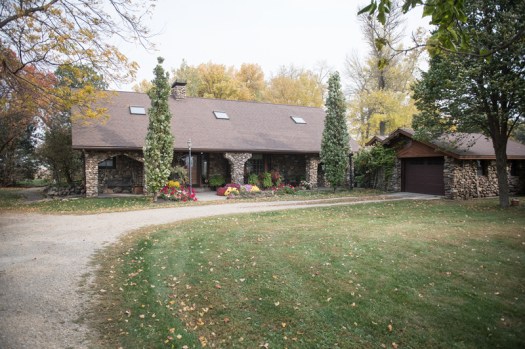 It took Stenzel 10 years to build his house and three to construct the garage. - Colleen Harrison/Albert Lea Tribune

Man’s love of building with rocks began as a child

WELLS — An area man has taken a hobby and made a home out of it.

Eugene Stenzel, now 80, played with rocks as a child. He would build mountains out of the stones, but didn’t like that they would move, so he started to glue them down. At 10 years old, he started playing around with cement. After a number of failed attempts, he eventually got the hang of the mixture and created his first stone work — a shrine or grotto for the Virgin Mary.

“They’re all low to the ground because I was 10 years old and couldn’t lift (the stone pieces) any higher,” Stenzel said.

That original piece and others that followed were made of broken stone pieces, but Stenzel said using such small pieces took too long for him, so he moved on to using whole stones in his work. He built his house, which took him 10 years, along with his garage, which took him three years. He also built a fence and a gate leading to the house, which each took one year.

Touring Stenzel’s property, other stone creations catch the eye — a gazebo in the backyard, a pergola in the front, a series of arches leading next door where his niece and nephew live, and multiple bell towers throughout the property, among other stone works. He has a fountain housed underneath different archways in his front yard, with each of the four seasons represented in the arches.

The property originally belonged to Stenzel’s great-grandparents, who immigrated from Poland in 1884 and bought the farm in 1887. It was passed down through his family, and now has been divided up between Stenzel and his niece and nephew, Shannon and Matt Zebro. Original pieces of the family farm have been preserved or reworked for other purposes — a grainery has been turned into a family sitting area, and the old one-room schoolhouse Stenzel, his siblings and ancestors attended has been moved to his niece’s and nephew’s property.

Stenzel retired from being a full-time priest about 10 years ago, after about 53 years practicing. He still leads masses when needed for a congregation in Mankato.

Elements of his faith have been worked into several of the stone pieces around the property, from Jesus Christ to St. Francis. The tributes are involved partially because of their own importance to Stenzel, but also because people often bring him religious statues and other items, so he decides to incorporate the pieces into his work.

Other elements of Stenzel’s pieces have been given to him as well; a number of the bells used in his different bell towers have been offered up to him, including one that used to be part of a locomotive. A wire piece on top of his series of arches was created by a friend.

Stenzel lives in the house he built out of stone. He originally planned for the house to take about 20 years to complete, but was able to cut that time in half after finding a cement mixer at a garage sale that helped expedite part of the process. He also wanted to make sure his father was able to see the house completed, and he did.

Stenzel did all the stonework on the house himself, first starting with a load-bearing wall that is now in the center of the house, dividing his kitchen from his living room. He said he built about one wall a year, after digging 8-foot-deep trenches by hand, and would work on the house during visits home and time off. He paid to have the roof done, and while waiting for that to be completed he started work on his garage. His nephews and brothers helped him insulate the walls of the house. The house is made of stone, concrete, concrete blocks and 2-by-6 pieces of wood.

“It was built literally one rock at a time,” he said.

Stenzel has lived in the house over 20 years now, and has also added a sunroom onto the home with stone archways leading out to it.

All his work is done by “eyeballing,” Stenzel said.

Stenzel has routinely given tours of his house and his work, but has put those on hold this year due to the COVID-19 pandemic. He plans to offer them again once the pandemic is over. In the meantime, Shannon Zebro runs a Facebook page showcasing his work, under the name “The Stone House” — Stenzel does not own a computer.

Stenzel completed another bell tower this summer, and he said it will be his last large-scale project. He will likely work on some smaller projects, but said the larger productions have just gotten to be too much work for him.

He said he will keep busy, though, as he maintains a considerable vegetable garden as well as numerous flower gardens. He also enjoys cooking for his family, and has some projects in mind for next year, such as painting a mural with his niece on a shed on her property.