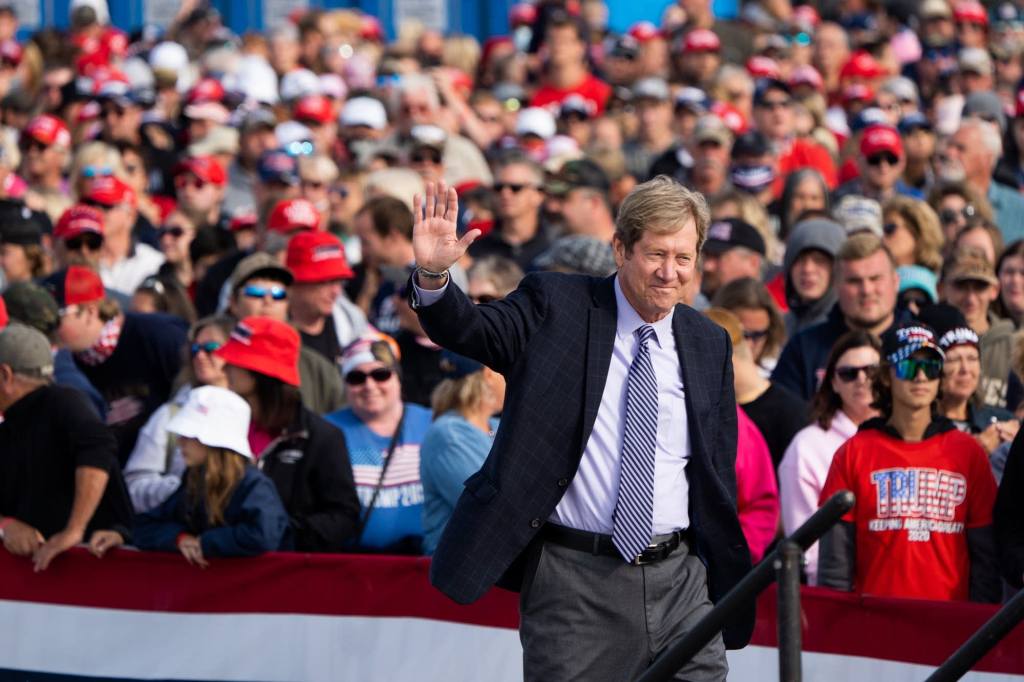 U.S. Senate candidate Jason Lewis takes the stage to warm up the crowd before the arrival of President Trump in Bemidji on Sept. 18. Evan Frost/MPR News file

The campaign said the condition could have been life-threatening if not treated quickly. An internal hernia is a bulge or protrusion of an organ — often the bowel into the abdomen. It can cause an obstruction or other problems.

But campaign manager Tom Szymanski said in a follow-up statement that his surgery was “successful and minimally invasive. Provided that his recovery continues on a positive trajectory, doctors anticipate that he is likely to be released from the hospital in the next couple of days.”

“Praying for a Successful Surgery and Quick Recovery for our Friend @LewisForMN,” Pence tweeted. “Today. Minnesota and America are with you!”

Lewis experienced severe abdominal pain early Monday morning and was taken to an emergency room, Szymanski said in the first announcement. “Prior to being taken to the operating room, Jason was in good spirits, optimistic, and true to form, he was speculating about when he could resume campaigning, eager to continue fighting for his fellow Minnesotans,” he said.

Smith tweeted well-wishes to Lewis for “a successful surgery and a speedy recovery.”

Lewis has been all-in for President Donald Trump during the campaign. He has stressed their common opposition to coronavirus restrictions, support for law and order in the state where George Floyd was killed, and the need to put Amy Coney Barrett on the Supreme Court.

Trump has returned the love with frequent name-checks at recent rallies in Minnesota. Lewis was part of the welcoming committee when Trump arrived in Minneapolis on his most recent visit, and he got to fly with Trump on Air Force One. He has taken himself off the campaign trail twice due to potential coronavirus exposures but tested negative.