The time has come 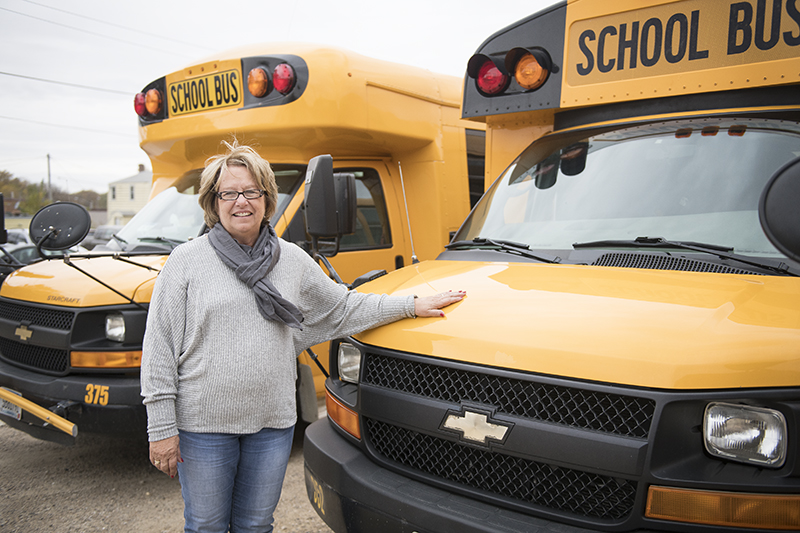 Albert Lea bus dispatcher retires after 25 years on the job

After a quarter of a century, a local school bus dispatcher is hanging up her radio.

Janet Karl retired Wednesday after 25 years of working for Albert Lea Bus Co. She initially was hired on as a driver for one of the special education buses. Before she became a driver, though, Karl said she almost quit before she could even start. The written portion of testing to be a bus driver was difficult for her, as Karl said she is not a great test taker. Her manager at the time encouraged her to try the written test again, though, and after she passed on her second try she started driving.

Karl drove for about five years before she was given the opportunity to move into the office to head up dispatch for the bus company.

Karl and her husband, Chuck, own Karl’s Carquest in Albert Lea. Before Janet Karl took the bus driving job, she said keeping the books for Carquest was a full-time job. Once more of the record-keeping became digital, though, she had more free time and wanted to find a second job, and saw an ad for Albert Lea Bus Co. hiring in a newspaper.

Karl credited her supervisors at the bus company with working with her so she could spend her time at both businesses.

Her role with dispatch was comprised of keeping all the routes straight to assist her drivers. The company handles about 31 bus routes each morning during the school year, and also drives four vans of students over to Austin each day. There’s about 10 additional routes in the afternoons, as they drive Hollandale Christian School and St. Theodore Catholic School students home as well. Covering the Albert Lea Area Schools district has them picking up and dropping off students not just in Albert Lea, but in Hartland, Hollandale, Alden, Emmons and Twin Lakes as well, Karl said.

Karl said the relationships she has built with the school bus drivers and aides as well as school secretaries over the years have been precious to her. She grew up in a family of 12, which she said helped her be able to work with different personalities through her job as well.

She said she has enjoyed getting to know everyone, and will definitely miss talking with them so often. But, Karl said it seemed time to step away. She said she wanted to hit her 25-year mark, and she and her husband had planned to go on a lengthier vacation in the winter before the COVID-19 pandemic canceled those plans. With the news of the pandemic, Karl also wanted to help the bus company get through the start of this school year, as it has had to figure out all new routes with the Albert Lea school district starting the 2020-21 year with a hybrid model.

“It was quite a challenge for us,” she said, as she worked some 12-hour days over the summer to figure out how the routes would work to get everyone where they needed to be while trying to keep everyone safe. She said the bus company worked well as a team with school administration to get the job done.

The bus company now picks up elementary school students first on school days, and then turns around to pick up Southwest Middle School and Albert Lea High School students, depending on their in-person days. With the older students being done around 1 p.m. and elementary around 3 p.m., Karl said many days it feels like they have “routes virtually all day.” Fridays are quieter, as those are distance learning days for all Albert Lea students, but the bus company still drives the Hollandale and St. Theodore school students those days as well as Albert Lea preschoolers.

“This is a nice time to be done,” Karl said.

Being a 65-year-old stroke and breast cancer survivor, she said she is looking forward to slowing down more.

She will still keep books at Carquest, but said she plans to travel more with her husband once the pandemic has quieted down. She also plans to be able to spend more time with her daughter and grandchildren in Rochester, and her family plans to spend more time next summer up north, where her son is building a cabin.