Trump rakes in money, stirs up supporters in Minnesota trip 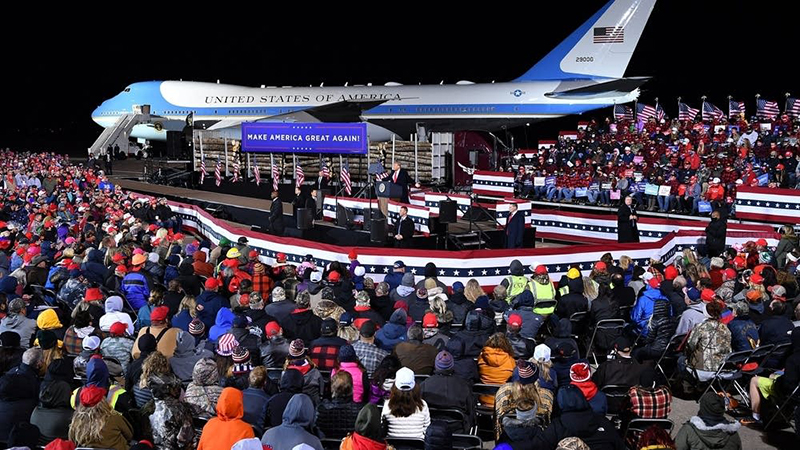 Trump’s only public remarks were in Duluth, where he told thousands of bundled-up, sign-waving supporters that he’s delivered for their region and needs them to deliver for his re-election campaign.

The thousands gathered on an airport tarmac included many who didn’t distance themselves from each other or wear face masks, with the notable exception of those behind the stage and in camera view.

In a 46-minute speech — short by Trump’s standards and in what he confessed came under brisk weather conditions — Trump unleashed a barrage of attacks on Biden, other Democrats, the moderator of Tuesday’s debate and people who have criticized his presidency.

“Who’s going to do what we’ve done for you?” Trump said, promising to clear permits for new mining and pipeline projects in northern Minnesota.

He attacked refugee resettlement and Democratic Rep. Ilhan Omar of Minneapolis, setting off a “lock her up” chant by the crowd.

Earlier, Trump hauled in millions of dollars in a private fundraiser at a Lake Minnetonka estate.

It’s his third visit to Minnesota in recent weeks and the second focused on the northern part of the state, where his campaign hopes to build a vote cushion, as they anticipate problems closer to the Twin Cities.

Hours before Trump got to Duluth supporters were lined up in rain and driving wind, with many dressed in rain ponchos.

Nancy Vergin drove the four hours from Benson, in west-central Minnesota, to attend.

“He has made promises. He’s kept his promises. He stands up. He’s going against the riffraff and the swamp. He’s draining the swamp and it’s not easy,” she said, predicting Trump would secure another four years.

Christine Hinckley of Wyoming, Minn., a city about two hours south of Duluth, said she wanted to be on hand to show support for Trump and his moves to restrict abortion, including the appointment of judges who would uphold laws that chip away at Roe v. Wade. She had no issues with Trump’s debate performance, and also criticized the other participants instead.

“Whenever you are passionate about something, you may come off as a bit aggressive, because that’s how much he loves and cares about the people of this country,” Hinckley said.

The president’s focus on Minnesota has been intense since his narrow defeat in the state in the 2016 election. He established an early campaign presence, has dispatched top surrogates and has visited often himself.

But there are also signs that Trump’s campaign is scaling back its investment as Election Day draws nearer. Twice in September, the campaign slashed television ad spending it had booked for the stretch run — by more than 90 percent in the Twin Cities market this week alone.

Duluth Mayor Emily Larson joined a DFL Party conference call ahead of the Trump rally. She called Trump a white supremacist who cares only about himself.

“We will ensure the safety of his visit while he is here, and we will fight like hell the second he is gone,” Larson said.

Biden was in Duluth earlier this month. His running mate, California Sen. Kamala Harris, was due to headline a DFL Party fundraising dinner on Thursday, although only in virtual fashion. Jill Biden, the nominee’s wife, is set to return for a second visit to Minnesota on Saturday.

Biden’s campaign issued a statement about the latest Trump swing in Minnesota. It faulted Trump’s administration for failing to contain a pandemic that led to a steep loss of jobs and lives, including more than 2,000 deaths in Minnesota and nearly 100,000 positive cases.

“Minnesotans deserve a president who will bring us together — not tear us further apart — and focus every single day on making their lives better. That starts with coming together to defeat COVID-19 and rebuilding our economy to include every Minnesotan — from Moorhead to Minneapolis, Redwood Falls to Rochester, and Duluth to Detroit Lakes,” the Biden campaign statement said. “There’s too much at stake in this election to leave anyone behind.”

Minnesota has the nation’s longest streak of backing Democrats in presidential races, dating to the 1976 win by Jimmy Carter. Trump came close to pushing it into the GOP column, losing by 45,000 votes to Hillary Clinton in a race that also saw a 9 percent share of the vote go to third-party candidates.

Trump is trying to build on his support in greater Minnesota, while Biden is counting on strong Democratic turnout in the Twin Cities area.

Voting is well underway in Minnesota, and more than one million people have already requested absentee ballots. That amounts to about one-third of the expected number of voters.