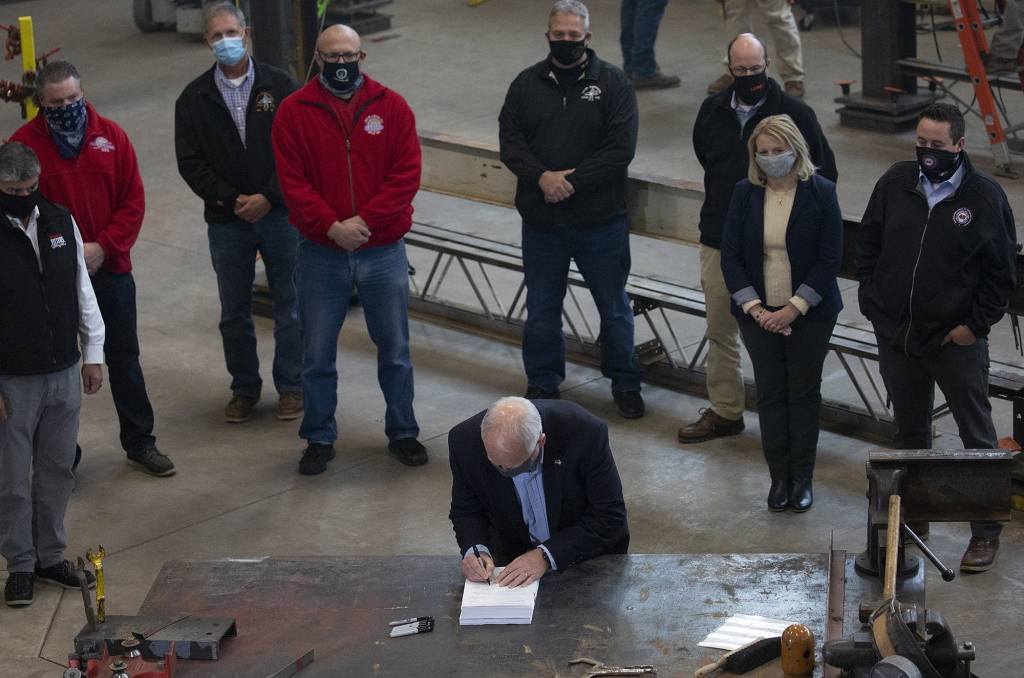 Gov. Tim Walz signed a massive public works bill into law Wednesday that he said will improve Minnesota’s infrastructure and ensure construction crews are kept busy as the economy digs out from a recession.

Surrounded by representatives of the construction trades at an iron workers’ training center, Walz delivered the $1.9 billion plan the final approval it needed after the Legislature sent him last week. It will take hundreds of projects from conception to reality across the state.

“It’s a sense of all of us in it together. There are projects that are equally spread throughout Greater Minnesota and the metro area,” Walz said in celebratory remarks. “They span a whole variety of things that needed to be done. And it was done because of hard work.”

The bill took almost all year — and multiple special sessions — to complete. Walz said the drama aside, it provides a perfectly timed boost given low interest rates and crews hungry for work. He said the record size speaks to the long backlog of projects.

The plan will allow for the sale of bonds to pay for new or refurbished buildings, replaced roads and bridges, fixed up trails and water treatment plants and much more.

Walz said his administration will explore selling the bonds sooner than usual to lock in the best rates.

“This isn’t all that different than your own home is your biggest single investment for a family,” he said. “You don’t let it run down. You don’t let the roof fall apart and the windows crack and the foundation start to crumble. You invest and you build back up again.”

Barry Davies, business manager for the Iron Workers Local 512, said the wait was worth it.

“We need job opportunities for our members. Right now there’s not enough work in construction to keep the construction industry afloat,” Davies said. The bill he said, “is going to take care of that.”

The bill passed by overwhelming margins in both the DFL-led Senate and Republican-controlled House. It took 25 crossover members in the House to keep it moving.

Several of the Republicans who broke ranks scored endorsements Wednesday from the North Central States Regional Council of Carpenters, a labor nod that will come in handy with the election two weeks out.

The measure also contains about $200 million in tax cuts for businesses and farmers. It also spares two state prison facilities from closure.