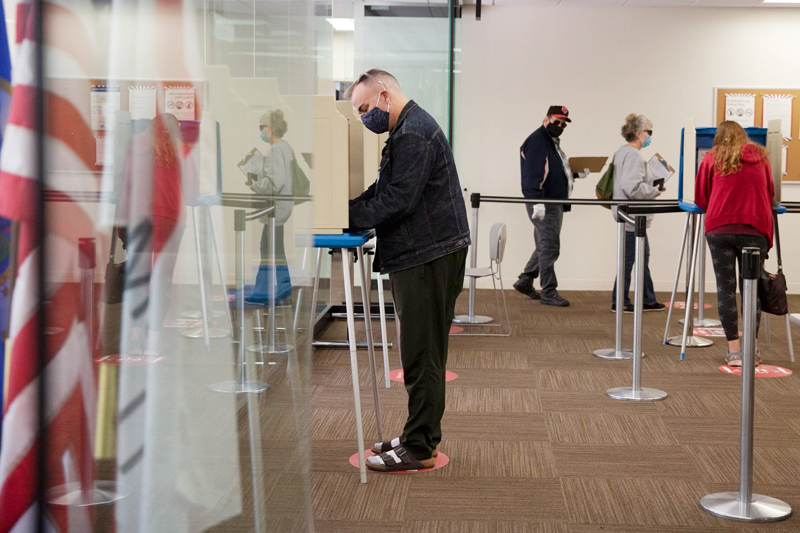 The political geography of Minnesota is pretty simple these days: Democrats are dominant in and around the Twin Cities of Minneapolis and St. Paul, while Republicans pile up votes in most of greater Minnesota.

But underneath this vast urban-rural divide are shifting trends that could determine the winner in November’s presidential election.

Four years ago, President Donald Trump got the best showing for a Republican presidential candidate in Minnesota in decades, losing by just 1.5 percentage points, or around 45,000 votes.

Trump pulled this off by demonstrating robust support in almost all of the state. He won 78 of Minnesota’s 87 counties — and often by sizable percentages.

His most concentrated support was in usual Republican strongholds in the outer suburbs, or exurbs, of the Twin Cities. For example, Trump beat Democrat Hillary Clinton by nearly 23,000 votes in Wright County and by almost 18,000 each in Anoka County and Sherburne County.

These exurban votes, plus some of the larger counties in greater Minnesota where Trump beat Clinton, combined to give him a margin of nearly 193,000 votes.

On top of that, Trump piled up lots of smaller margins in greater Minnesota: lopsided wins in small places such as Pipestone County, and narrow victories in some bigger places such as Clay County. All told, Trump had 60 different counties where he won by fewer than 5,000 votes — small margins that added up to another 135,000 votes.

But it wasn’t quite enough.

How Clinton hung on

Hillary Clinton won only nine Minnesota counties, four of them by fewer than 1,000 votes. Her victory margin in traditionally Democratic St. Louis County was just 13,000 votes, less than half of Barack Obama’s edge there in 2012.

But it turned out Clinton didn’t need St. Louis County in 2016 to win Minnesota. She won the state entirely on the basis of her margin in its two largest counties: Hennepin and Ramsey.

While Trump racked up nearly 193,000 votes in the 18 counties where his victory margin was large, Clinton had a lead of more than 237,000 votes from Hennepin County alone.

Add in a lead of nearly 107,000 votes from Ramsey, and she had a 344,000-vote edge just from these two big counties — more than Trump’s combined 328,000-vote edge from all 78 counties he won. And that’s not even counting Clinton’s slimmer margins in counties including St. Louis, Dakota and Washington.

This wasn’t that unusual. When Democrats do well in statewide races here, their entire margin of victory often comes from the central metro.

That doesn’t mean Democrats are getting votes only in the metro area, of course. Clinton got a third of her statewide votes outside the metro, nearly 458,000 Minnesota voters. Similarly, more than 190,000 Hennepin County residents voted for Trump; they were outnumbered, but their votes count just the same.

The 2016 election also saw a big surge in votes for third-party presidential candidates, votes that exceeded the slim margin by which Clinton beat Trump.

Successful Democratic candidates don’t just run up the vote in Hennepin and Ramsey counties, they hold down their losses in Republican counties. Obama’s comfortable 2008 victory saw him win big in the metro, but also lose Republican strongholds like Wright and Sherburne counties by half the margin Clinton did.

But while the Twin Cities have long been strongholds for Democrats, and the exurbs the same for Republicans, recent years have upended Minnesota’s political geography in other ways.

Trump turned in the best performance in the Twin Cities’ exurban fringe of any Republican candidate for president or governor in the past two decades. But that wasn’t the story of his near win.

Instead, what made Trump’s 2016 performance in Minnesota so striking was the massive margins he racked up in rural Minnesota, far beyond the Twin Cities.

Until 2016, the best Republican performance in greater Minnesota this century had been Pawlenty’s 2002 gubernatorial win, when he won by nearly 80,000 votes there. Four years ago, Trump nearly tripled that record with a 220,000-vote margin beyond the greater Twin Cities.

This strength seemed to come out of nowhere, historically. Republicans have tended to do well in rural Minnesota counties for a long time, though they steadily lost ground during the George W. Bush administration before rebounding under Obama. And they won lots of local legislative elections there in 2010 and 2014.

But the magnitude of Trump’s win in rural Minnesota was unprecedented for any top-of-the-ticket Republican candidates here this century.

“It’s very striking. It’s unprecedented. But it also is consistent with national trends,” said Kathryn Pearson, a political science professor at the University of Minnesota. “In 2016, Trump gained more rural voters than had previous Republican candidates.”

J. Miles Coleman, associate editor of the political newsletter Sabato’s Crystal Ball, noted that Trump’s wins in Michigan, Pennsylvania and Wisconsin, along with his near-win in Minnesota, came because he “did a very good job of turning out infrequent voters” in rural areas.

The big remaining question is the degree to which Trump’s 2016 rural dominance represented a fluke, or is a political turning point.

The one statewide election since then, in 2018, suggests it might be mostly a fluke. Republican gubernatorial nominee Jeff Johnson did better in greater Minnesota than any Republican presidential or gubernatorial candidate since Bush in 2004 — but still won less than a third of Trump’s 2016 margin. That could mean Republicans have won some new lasting rural voters, but will struggle to recreate Trump’s 2016 performance.

But Trump himself wasn’t on the ballot in 2018. Johnson’s more modest victory in greater Minnesota doesn’t mean Trump can’t repeat or even improve upon his 2016 performance here.

“If [2018] had been a presidential election year, I think we would see different numbers in greater Minnesota,” said Pearson.

Trump’s campaign has invested heavily in rural Minnesota, and the president himself has visited Bemidji, Duluth and Mankato for rallies.

Minnesota Democrats have long done well in Minneapolis and St. Paul, and over recent decades have expanded this dominance to inner-ring suburbs in Hennepin and Ramsey counties.

For years, though, they faced a continued frustration: Democratic voters would turn out in huge numbers for presidential elections, but not for midterm elections when governors and other statewide offices were on the ballot.

The 2016 election saw Democrats reach new levels of dominance in the core metro, and especially in the state’s largest county. Clinton won Hennepin County by nearly 240,000 points, almost twice as big as John Kerry’s 2004 win there.

But something interesting happened when Tim Walz won the 2018 governor’s race: DFL turnout held steady in Hennepin and Ramsey instead of collapsing as had become the norm for midterms.

“There was no midterm effect in Hennepin County and Ramsey County in 2018,” said Pearson. “Democrats were just as mobilized to vote in a midterm than they had been in a presidential election. Absent the political context, that is really surprising.”

Combined with a smaller GOP edge in rural Minnesota, the sustained DFL dominance in the Twin Cities helped lead Walz to a landslide victory.

One key question on Election Day 2020 is whether Democrats will maintain or even improve upon their dominance in the core Twin Cities metro area. If they do, a Trump victory becomes extremely difficult. Trump’s path to victory probably involves holding down rival Joe Biden’s votes in the metro in addition to racking up wins in greater Minnesota.

The final major development in Minnesota’s political geography has been the leftward march of the Twin Cities’ suburban counties. For most of the past two decades, the counties of Anoka, Carver, Dakota, Scott and Washington tended to give a majority of their votes to Republican candidates. But Walz won these suburban counties in 2018, the first top-of-the-ticket Democrat to do so this century.

The move left has been driven by Dakota and Washington counties, which were GOP strongholds back when Pawlenty won his first term in 2002. But they each voted for Obama in both 2008 and 2012, for Clinton in 2016, and then gave Walz unprecedented numbers there for a Democrat in 2018.

“Some of these trends have been going on before Trump, but he really kind of accelerated it,” Coleman said.

These suburban shifts reflect several dynamics. Newer suburban residents are more likely to be younger or people of color, both demographics where Democrats currently have an advantage. But Democrats have also made major gains recently among white suburban voters with college degrees.

The three suburban counties besides Washington and Dakota have been friendlier to Republicans, but their GOP margins have shrunk over the past two decades. Anoka County has been particularly volatile, voting for Trump in large numbers in 2016 before pivoting and giving Walz a narrow majority two years later.

Trump’s chances here this November could depend on whether he wins the Twin Cities suburbs again, or if they turn against Republicans like in 2018.