Working to save more lives 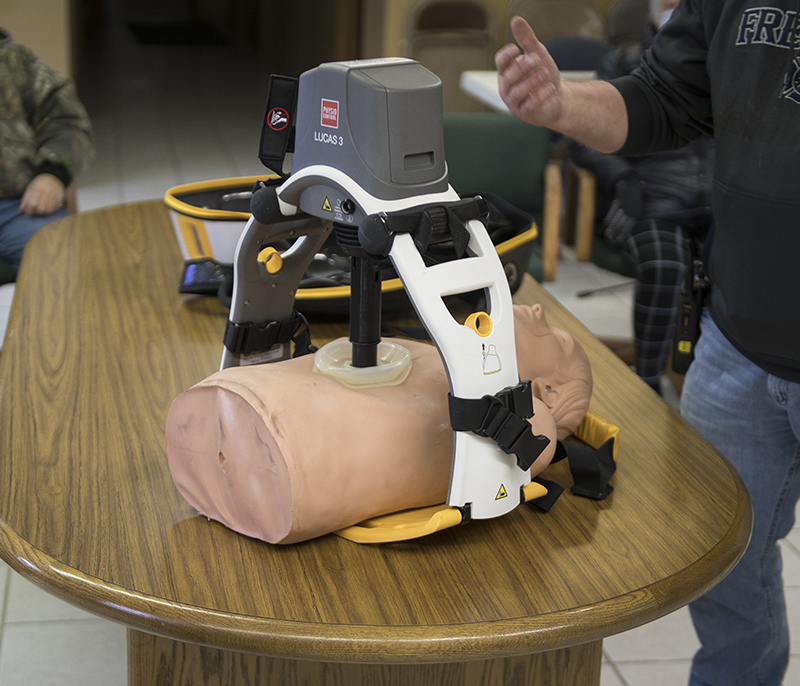 The Freeborn Fire Department has had a LUCAS device for about 2 1/2 years, and is hoping to use CARES Act funding to buy a second machine for its other ambulance. The machine provides chest compressions for CPR. - Colleen Harrison/Albert Lea Tribune

FREEBORN — A machine that assists first responders in administering CPR has made a difference in an area community.

LUCAS machines are mechanical chest compression devices that help emergency personnel deliver consistent chest compressions to sudden cardiac arrest patients, and can be used in the field, on the move and in the hospital. Seipp said his department’s machine has gone into an ambulance and to the hospital on calls they have responded to.

“We’ve used it a lot,” he said. “It’s a wonderful, wonderful machine.”

The machine the department has cost about $14,000, according to Seipp. The department hopes to purchase a second machine for its other ambulance using Coronavirus Aid, Relief and Economic Security Act — or CARES Act — funding. The Freeborn City Council was set to vote on whether or not to use the funding to purchase a second machine during Wednesday’s city council meeting.

Seipp said the machine is beneficial because every second counts, especially when someone is experiencing cardiac arrest. CPR can make a world of difference, especially when having to take an ambulance ride to Albert Lea from Freeborn. The battery-operated machine can also be used as a defibrillator.

He recalled a time the department used the machine on a call for about 45 minutes straight, before plugging it into a wall socket as the machine’s battery charge started to deplete. The extra time using the machine bought the team enough time to get a pulse back in the patient so they could be loaded into an ambulance for the hospital along with the LUCAS machine.

“The LUCAS made a big difference because it’s good, quality CPR,” Seipp said.

He said the machine has become more popular since the COVID-19 pandemic, as it helps distance first responders from patients. Seipp also said survival rates in general improve using the LUCAS system.

“Manual high-quality CPR can be difficult to train and to maintain for a very long time,” according to the American Society of Anesthesiologists website. “The LUCAS device does more than just providing consistent, high-quality CPR works; it works by creating a positive intrathoracic pressure when the chest is compressed.”

The website went on to say that in 2019 clinical trials, survival with a favorable neurologic outcome was higher in patients who were administered CPR using a chest compression device.