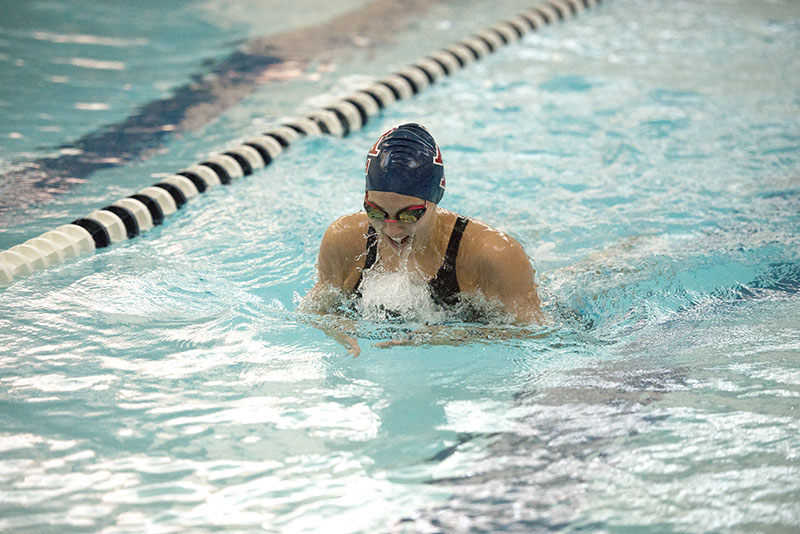 Senior Jaeda Koziolek was named to the Big Nine All-Conference swim and dive team. Her performance at the section meet would have earned her a trip to the state meet for a sixth-consecutive year in normal circumstances. Tyler Julson/Albert Lea Tribune

On the girls’ swim and dive team, senior Jaeda Koziolek was named to the All-Big Nine first team and junior Janna Steffl was awarded an honorable mention spot.

“Jaeda is such a versatile athlete,” said head coach Angel Welch. “She can swim any event competitively. Jaeda is also a great coach and works well with the other girls on the team. It’s hard to believe she’s a senior. She has had such a big impact on our team over the past few years.”

Steffl came into her own in the one-meter diving competition this season. In the section meet, Steffl came in fourth place with a score of 307.8 and would have earned a trip to the state meet.

“Jenna is in her second year of diving and is incredibly talented,” Welch said. “She is fearless and scores well at all of our meets. She’s motivated, eager to improve and doesn’t give up.”

Sophomore Gavin Hanke was the lone Big Nine All-Conference selection from the boys’ cross country team. Hanke earned the selection with a 17:37.55 15th-place finish in the conference meet.

“Gavin is a very talented runner with a tremendous work ethic and a competitive drive that helps him compete at a high level,” said head coach Jim Haney. “Gavin loves to know how he can improve and he looks to his teammates to make him a better runner. He takes great pride in his effort as well as the efforts of his teammates.”

“I have asked a great deal of Aaron since his eighth-grade year and he has always come through with a positive attitude and good nature that make him a natural leader,” Haney said. “The coaching staff was so happy with how competitive Aaron was during his cross country career, he is a role model for my runners as they compete but also how he carries himself in the classroom.

Seniors Maddie Schneider and Laura Flaherty were named to the All-Conference team for the girls’ soccer team. Junior Esther Yoon was named an honorable mention. The girls’ soccer team finished 4-6-1 this season with dominant wins over Austin and Faribault. The team’s season came to an end in the second round of the Section 2A tournament with a 6-0 loss to Waconia.

On the soccer team, senior Caleb Hanson was named to the All-Conference team for his work in the net and fellow senior Kyaw Kmoe was named as an honorable mention as an attacker.

Big Nine All-Conference football and volleyball teams have yet to be announced.