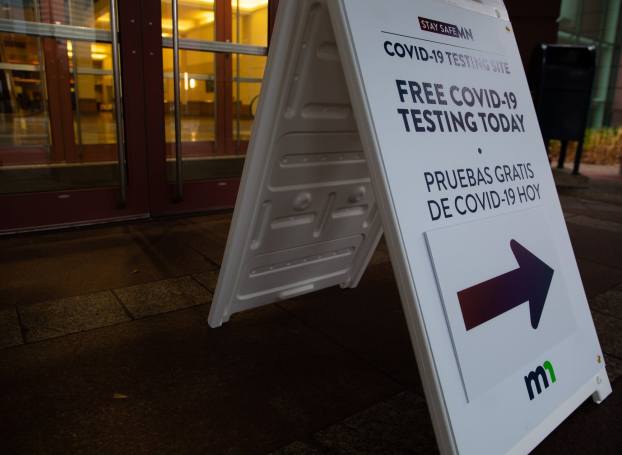 A difficult Thanksgiving for many

COVID-19 is delivering some especially awful news in a holiday week that’s supposed to be focused on life’s blessings and joys.

Minnesota officials on Wednesday reported 72 more deaths of people with the disease, tying a single-day record set last week. So far this month, 918 deaths have been reported — that’s more than 1 in 4 to date in the pandemic.

With the state averaging a record 52 deaths a day over the past seven days and some 1,800 people still hospitalized with the disease, it could be difficult Thanksgiving in many households.

One hopeful sign Wednesday: the rate of positive tests — a key measure officials follow to judge the spread of the disease — is trending downward, although it remains far higher than the 5 percent officials find concerning.

Is a pandemic peak in sight? Officials say probably not.

New hospitalizations topped 300 for a second straight day Wednesday. After a hopeful pause the prior two days, the trend line for new admissions rose again to a new high.

Minnesota Health Commissioner Jan Malcolm on Tuesday tamped down hopes that the current data pointed to a consistent improvement in conditions, and she noted hospital admissions remain high.

“We would not consider that we have any sort of a reliable trend just yet,” Malcolm told reporters.

“While we’ve certainly been pleased to see somewhat lower case counts in recent days, we think that this might be another of those patterns that we’ve seen earlier in the epidemic,” she said. “Possibly we are in a trough now between waves and do not necessarily think that what we’ve seen in recent days represents the downside of a peak.”

Health authorities remain concerned about another possible hospitalization jump in a few weeks following Thanksgiving holiday gatherings where family members and friends without symptoms may unknowingly spread the virus.

People in their 20s still make up the age bracket with the state’s largest number of confirmed cases — more than 57,000 since the pandemic began, including more than 31,000 among people ages 20 to 24.

The number of high school-age children confirmed with the disease has also grown, with nearly 23,000 total cases among children ages 15 to 19 since the pandemic began.

Democrats and Republicans at the Capitol seem poised to find a compromise that would help some 14,000 bars, restaurants and other hospitality businesses in Minnesota hurt by the restrictions forced by COVID-19.

Walz on Tuesday unveiled the basics of his plan to provide financial help for restaurant and bar owners and workers hurt by the current COVID-19 restrictions.

Walz said he’s ready to call another special legislative session to offer COVID-19 relief and expressed hope of reaching a compromise with GOP lawmakers. He said he was “super hopeful” a deal can been reached with Republicans in the next week or so.

Republicans posted their own package Tuesday that includes some $400 million in direct grants.

“My hope would be that we can have money in their pockets within 30 days,” he told MPR news this week. “Knowing that it’s coming for these operators and knowing that we have relief on the way will allow them to sleep a whole lot better and to be able to communicate to their employees that life is going to get better.”

With hunger on rise, Walz says food relief is ‘hand up’ not ‘handout’