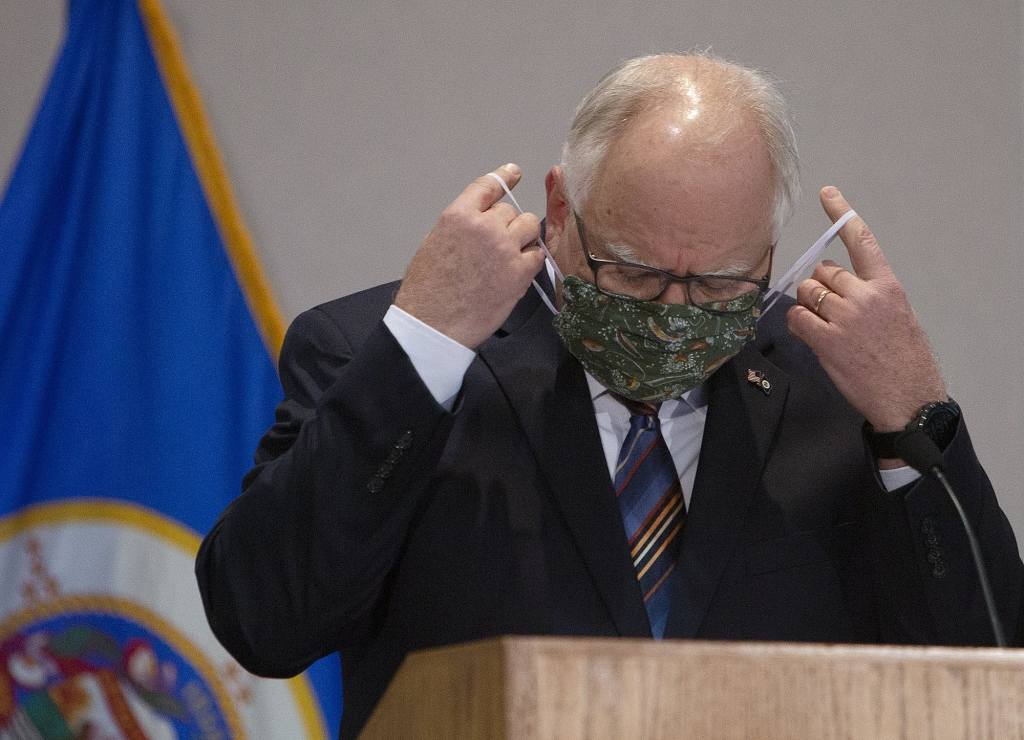 MINNEAPOLIS — A registered nurse who cares for COVID-19 patients at Abbott Northwestern Hospital in Minneapolis said Monday the pandemic is taking a toll on front-line workers, and she joined the governor and state health officials in urging people to alter behaviors and skip Thanksgiving gatherings as the pandemic pushes hospitals to their limits.

Kelley Anaas said her ICU filed up with critically ill COVID-19 patients over the weekend. Some came from around the state and had to wait hours for an ambulance or medical helicopter. She said she and her colleagues intubated more patients than they transferred to other floors, and said goodbye to patients they’d been treating for weeks.

“Up until nine months ago, ‘nurse’ was my only professional title. Suddenly I had earned a new designation, ‘front-line worker,'” Anaas said. “Honestly, I’ve always found this name laughable as it implies there’s a second line of us waiting in the wings — Minnesota, we are your only line.”

As COVID-19 cases continue to rise across the state, Gov. Tim Walz warned that positive cases in the pipeline would end up putting Minnesota hospitals under even more strain in coming weeks. He said more restrictions will likely be announced this week, including possible changes to youth winter sports, and he urged Minnesotans to stop politicizing the pandemic and listen to health officials.

“We need to fight the virus and not each other,” the Democratic governor said, adding: “Wear your masks and stay healthy — if for no other reason. that’ll keep you healthy to vote against me in two years.”

On Monday, Minnesota health officials reported an additional 7,444 positive cases of COVID-19, bringing the total number of cases in the state to 231,018, including roughly 24,000 in the last three days. Another 12 people died from the virus, bringing the death toll to 2,917 since the pandemic began.

Malcom said activities that were deemed relatively safe a month or two weeks ago are now significantly more risky due to the dramatic increases in cases and hospitalizations. That includes small Thanksgiving gatherings — which she said should be reconsidered.

“The ground is really shifting under our feet and we need to adapt quickly. The plans we thought might OK earlier this month, even now might present an unacceptable risk to friends and family,” she said.

The dire warnings come a day after Republican Senate Majority Leader Paul Gazelka announced he had tested positive for COVID-19 amid reports that the GOP held in-person meetings and a dinner party Nov. 5 that drew more than 100 attendees. Republican senators and staffers were told last Tuesday that some Republican senators were diagnosed with COVID-19, but the memo wasn’t shared with Senate Democrats in advance of a special session last week.

The situation led Senate Minority Leader Susan Kent to call on Gazelka to resign from his leadership post. Kent said the Republican caucus has “engaged in high-risk behaviors” under Gazelka’s leadership and members have “made excuses instead of being accountable.”

Gazelka did not immediately return a message seeking comment Monday. In a statement Sunday, he said he has been in quarantine since he began experiencing symptoms Nov. 9 and “will remain in quarantine as long as my doctor advises me to.” He said he was not experiencing major issues or symptoms, and the “blaming and shaming” of a positive COVID-19 test has to stop.

“The deliberate choice to use a COVID diagnosis as a political tool to blame just Republicans when community spread is uncontrolled is indicative of failed leadership looking for a scapegoat,” he said. Gazelka is in Florida and said he did not attend the Legislature’s special session Thursday.

Walz urged Minnesotans to take politics out of the pandemic and urged people to listen to people like Anaas.

“Please Minnesota, stay home this Thanksgiving so you don’t have to ring in the new year with me,” Anaas said.