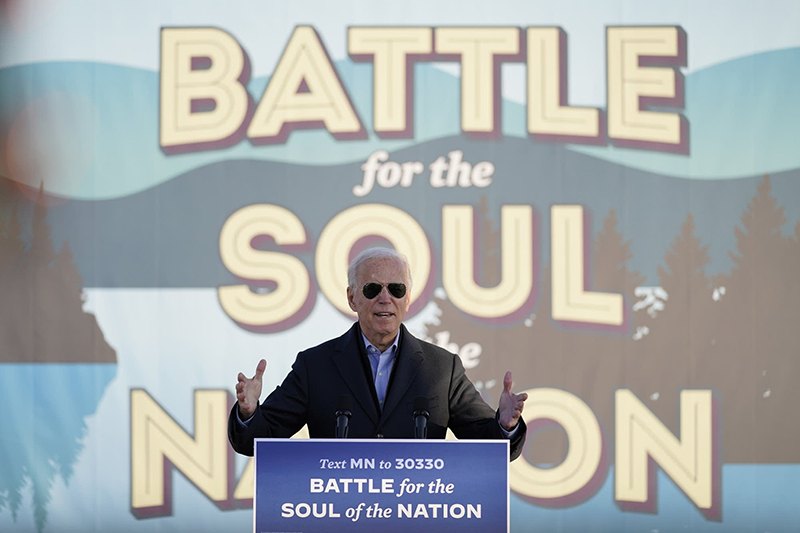 Two other of the state’s eight House seats were seen as close. Also on the ballot: the potential for Democrats to capture full control of state government by taking the Senate.

A record number of Minnesotans voted early to avoid potential long lines on Election Day and the threat of the coronavirus. The state told voters it would count absentee ballots that came in up to one week beyond Election Day as long as they were postmarked by Tuesday. But a court ruling last week requiring that those ballots be segregated cast doubt on whether late-arriving votes would count.

At midday Tuesday, the state reported that some 283,000 requested absentee ballots hadn’t yet been returned.

A look at races in play in Minnesota:

Joe Biden captured Minnesota despite a strong push from President Donald Trump. Trump nearly took Minnesota four years ago and talked repeatedly about doing it this year. That would have made him the first Republican to do so since Richard Nixon in 1972. Trump held several rallies in the state, mostly in rural and northern Minnesota where his following was strongest. Biden got a late start but benefited from a passionate Democratic turnout in the state’s liberal metro area. Two dueling visits by both candidates on the same days in the final weeks highlighted Minnesota’s battleground status.

Democratic U.S. Sen. Tina Smith defeated former U.S. Rep. Jason Lewis. Smith was in the rare position of having to defend her seat for the second time in two years. She was Gov. Mark Dayton’s lieutenant governor when he appointed her to the seat in 2017 after Sen. Al Franken resigned. Smith then won a special election in 2018 to complete Franken’s term. Smith gets less attention than Minnesota’s senior senator, Amy Klobuchar. But she has worked to build an image as a workhorse and has touted having over two dozen pieces of legislation signed into law.

“From the beginning, this campaign has been about what we can do to work together, find common ground, and get results for the good of Minnesota and our country,” Smith said in a statement. “Even in the midst of the great division and great challenges of this past year, I’ve always felt that Minnesotans at heart believe that we are better together.”

Lewis is a one-term former congressman who was well known from his days as a conservative talk radio host. He stressed his support for Trump, including their shared opposition to pandemic restrictions and a common message that they would be better for “law and order” than Democrats. Trump rewarded Lewis’ loyalty with public praise.

Republican Michelle Fischbach upset Democratic U.S. Rep. Collin Peterson, the chairman of the House Agriculture Committee. He was seeking a 16th term representing western Minnesota’s heavily agricultural 7th District, which sprawls from the Canadian border almost all the way south to Iowa. Fischbach is a former state senator who briefly served as lieutenant governor in 2018 when Tina Smith resigned the seat upon her appointment as a U.S. senator. Fischbach argued during the campaign that Peterson was too close to Democratic House Speaker Nancy Pelosi and other liberals.

Peterson, a conservative Blue Dog Democrat, had rarely faced serious challenges in his career. But the district has become more Republican over the years, which gave Fischbach an opening. He was instrumental in shaping several farm bills and was a champion of the region’s beet sugar industry. He opposed President Donald Trump’s impeachment but sharply criticized his trade war with China because farmers took much of the brunt.

There was a close race in southern Minnesota’s 1st District, where freshman GOP Rep. Jim Hagedorn is trying to fight off Democratic Iraq war vet Dan Feehan in a bitter rematch of their close 2018 race. And Minnesota’s 2nd District race, for the seat representing southern suburbs, was scrambled by the death of a third-party candidate. Democratic Rep. Angie Craig went to court to block having the election delayed until February, which might have put her at a turnout disadvantage against Republican and former Marine Tyler Kistner.

All 201 legislative seats are up for election this year, and the GOP is defending a three-vote majority in the Senate. If Democrats take the Senate and keep their comfortable House majority, they’ll control how Minnesota deals with a projected $4.7 billion budget deficit and the redrawing of state and congressional district maps. The redistricting stakes are high. Minnesota is on the bubble for losing a congressional seat after new census figures come out.

Associate Justice Paul Thissen, a former speaker of the Minnesota House, is facing voters for the first time since his appointment in 2018. Challenging him is Michelle MacDonald, a controversial family law attorney who is making her fourth bid for a seat on a court and is facing potential disciplinary sanctions for a second time.

A few dozen people marched in the streets of Minneapolis’ Uptown neighborhood, lighting off fireworks as they marched, carrying a banner that said, “America is Over.” Police said the group blocked traffic, spray painted the exterior of a business and threw debris and traffic signs into the road. Police also said it appeared the group set fires. Police said that as officers approached, some group members shot fireworks at officers. Officers ended up arresting 14 people on suspicion of rioting.

Marty Boeckman, 57, a software engineer from the Minneapolis suburb of Blaine who described himself as “very conservative,” said Tuesday that he voted for Biden “based on integrity. Integrity is what’s driving it all.” Trump, Boeckman said, ”is just not what I want from a leader.” He said Biden is better equipped to deal with the pandemic.

“Trump’s in denial. … There needs to be a middle-ground approach” between doing nothing and complete lockdowns, he said.

“The biggest issue for me would be law and order,” Janacek said. “And keeping the economy strong.” He said he was concerned about law and order because of unrest and other events that followed the death of George Floyd in Minneapolis, “and the ones that could unfold.” He also said he thought Trump would be more able to deal with the pandemic going forward.

“I think it’s a good balance of staying open but still protecting our citizens,” he said.