Brian A. Jordahl, 66, of Albert Lea, lost his very long battle with cancer on November 13, 2020 at St. Mary’s Mayo Clinic in Rochester.

Brian was born on October 24, 1954 to Myrland and Dorothy (Lindahl) Jordahl. He graduated from Albert Lea High School and then attended college in Duluth. He later transferred and graduated with his bachelor’s degree from St. Cloud State.

After college, Brian returned to Albert Lea and worked with his dad at Jordahl Meats, he took over the family business when his dad retired in 1984. He married the love of his life, Kristie, on August 27, 1983. The couple raised two children, Kellie and Josh. 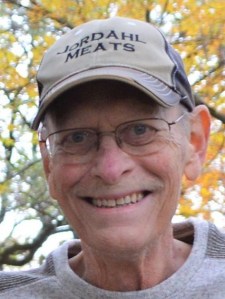 Brian would often be found in his recliner doing crossword puzzles and studying his fantasy football team. He loved to golf, and even though he was very competitive, he secretly loved when Josh started beating him. He looked forward to fishing and deer hunting with Josh, Megan, and the boys. He especially enjoyed the spear fishing trips to Winnie, and the annual spring trip to Games Lake. Brian would out-fish everyone, and made sure they all knew it. He always returned from his deer hunting trips to Rushford with some great stories. Brian loved when people would stop over, you could always count on him to greet you with a shot of tequila and a long, exaggerated story with some long dramatic pauses for effect.

Preceding him in death were his parents, Merle and Dorothy; sister, Susan Jordahl; and mother-in-law, Karelyn Porter.

Honoring Brian’s wishes, no formal service will take place. Please join the family for an informal gathering at Bonnerup Funeral Service from 4:00-6:00 p.m. on Tuesday, November 17, 2020. The family will hold Brian’s type of celebration at a later date.

In lieu of flowers, the family prefers memorial donations be made to the Hormel Institute, please reference Prostate Cancer Research.