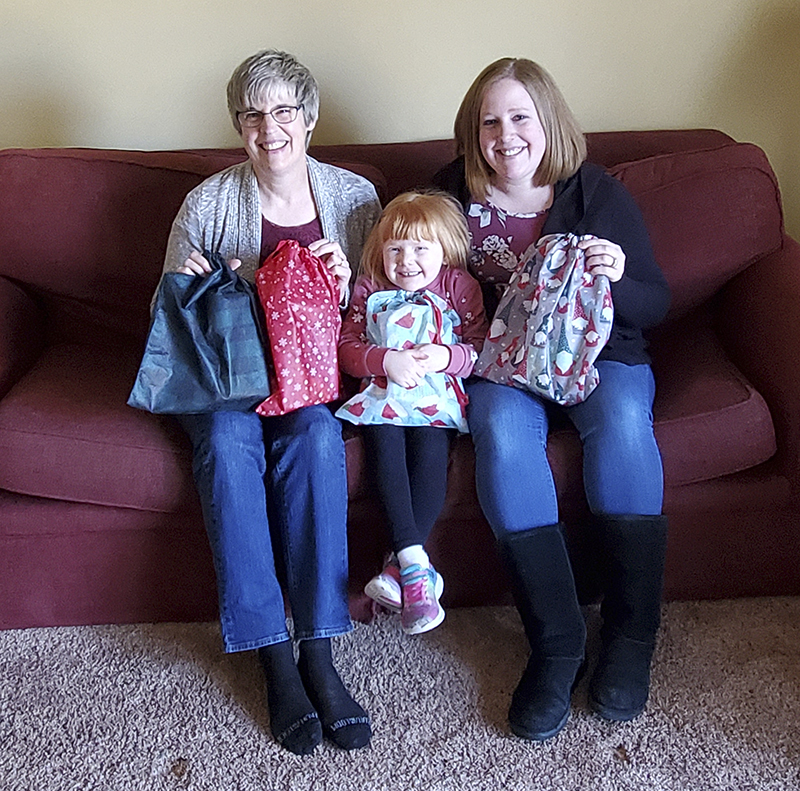 Cindy Bodensteiner, left, daughter Emily Honsey, right, and granddaughter Paislee have been thrilled with the response they’ve received for sponsorships for gift bags to give to residents at Thorne Crest Senior Living Community for Christmas. - Provided

An area family is doing their part with the help of several others to bring Christmas cheer to residents at Thorne Crest Senior Living Community.

Cindy Bodensteiner said this is the third year for her daughter, Emily Honsey, to conduct a service project as a Thirty-One Gifts consultant. The company specializes in customizable handbags, accessories and other items, and she has been able to recruit sponsors for bags and treats to put in them and then deliver them to various groups in town.

“This year, she said, ‘Wouldn’t it be cool if we could get gift packages for the residents at Thorne Crest because it’s turning into a lonely year for them,’” Bodensteiner said.

Bodensteiner’s parents — Honsey’s grandparents — had moved into the senior living center at the beginning of June, so the project had special meaning to them both.

The women said they put a note out on Facebook asking people if they would be interested in sponsoring a gift bag that they would fill and present for the residents for Christmas. Honsey also donated back her commission from the bags toward the project.

“We weren’t sure how many we would get,” Bodensteiner said.

Within a day, however, they were able to get enough donations for 120 bags, including both monetary donations and items to put in the bags.

They received donations of items from businesses including Church Offset Printing, the Albert Lea Convention and Visitors Bureau, Hy-Vee, Farmers State Bank and Tri-State Tax, along with individuals from both inside and outside of the community.

“We were just blown away,” Bodensteiner said. “We’ve gotten money from people we don’t even know.”

The bags will include everything from personal care items to treats to other specialized items from area businesses. Children at Hawthorne Elementary School, which is right across the street from Thorne Crest, are also working on a special project to give to the residents, though that likely won’t be completed until after Christmas.

“It’s amazing how people have just embraced this,” she said.

The family will deliver the bags to Thorne Crest Dec. 7, where they will be stored for a few weeks before being given to the residents closer to Christmas.

The women said they are thankful for the generosity of everyone who contributed toward the project and hope to keep the tradition going to bless the other care center in the community.

“Our hearts are overflowing,” Bodensteiner said. “It’s amazing to see that kind of generosity from people all over to get behind a project like this. It’s the true spirit of Christmas.”